Objective 4. Identify Types of Software and Their Uses

Computer hardware consists of the physical components of the system. However, without software, the computer would just be a collection of mechanical parts. Software provides the instructions that tell the computer what to do. To perform various tasks, the computer requires a set of instructions, called programs. Such programs allow individuals to use the computer without the need for special programming skills. There are two categories of computer softwaresystem software and application software. Both types of software are required to work effectively with your computer.

System software provides the instructions the computer needs to run. It contains the directions needed to start up the computer (known as the boot process), checks to ensure everything is in good working order, and enables you to interface with the computer and its peripheral devices so that you can use them. System software consists of two main types of programsthe operating system and utility programs.

Operating System (OS) Present on every desktop or notebook computer, in addition to many others ranging from mainframes to PDAs, the operating system controls the way the computer works from the time it is turned on until it is shut down. As shown in Figure 1.17, the operating system manages the various hardware components including the CPU, memory, storage devices, and peripheral devices. It also coordinates with the various software applications that might be running. The operating system provides a user interface, so that you can interact with the computer. Early operating systems used a DOS-based interface, which required knowledge of special commands that had to be typed accurately to achieve the desired results. As you can imagine, this type of system was not very user-friendly. Most current operating systems use a point-and-click format known as a graphical user interface (GUI). GUIs are more user-friendly and intuitive than DOS systems. Rather than typing specific commands, a mouse can be used to point and click on an icon (a graphical depiction of an object such as a file or program) or a menu (a list of commands) to perform a task. GUI operating systems display information on the monitor in the form of rectangular boxes called screens or windows. 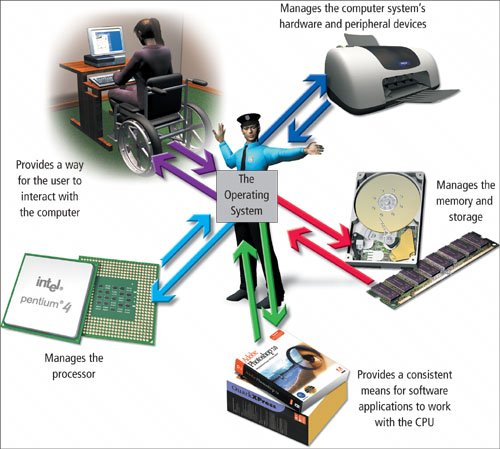 Different computers require different types of operating systems. There are several popular operating systems available for home computers. They include Microsoft Windows, Mac OS, and Linux. Microsoft Windows has the largest market share of the three and is found on most of today's desktop systems. There have been many versions of Microsoft Windows, including Windows 3.0, Windows 95, Windows 98, and Windows ME, just to name a few. Although a previous version of Windows might be found on an older machine, Windows XP Home Edition is the current version installed on new home computers, and Windows XP Professional is often found in businesses. A sample Windows XP desktop is displayed in Figure 1.18. Software developers are always updating and refining their software to adapt to new technology, respond to vulnerabilities, and improve their product. In fact, Microsoft is preparing to release its newest version, Windows Vista (originally codenamed "Longhorn"), and it might already be available by the time you read this book! Because Microsoft also manufactures application software, some of its products have similar names and users can become confused. It's important to note your computer might use Microsoft Windows for its operating system, although it does not have Microsoft Office (an application software suite) installed. 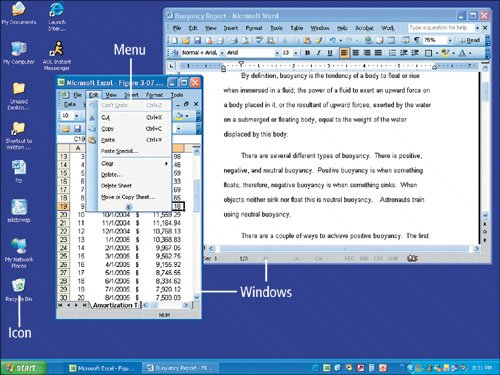 Mac OS is an operating system designed specifically for Apple's Macintosh computers. Mac OS cannot run on a PC, and Windows cannot run on a Mac. As you can see in Figure 1.19, the Mac OS appears similar to Windows, because it also uses a GUI. In fact, Apple was the first company to introduce a GUI operating system for commercial sale. But, because of the overwhelming popularity of the Windows-based PC, Mac OS has a much smaller market share. There are also significant differences in the way the Mac OS performs. Mac users tend to be very loyal and believe their system is far superior to the Windows system, although there are many Windows users who disagree. 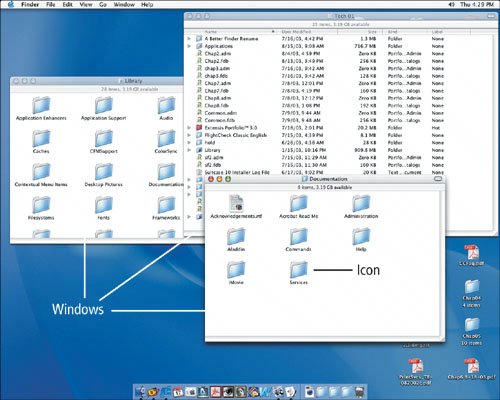 Linux is an alternative operating system. Based on the UNIX operating system developed for mainframe computers, it also has a dedicated group of users. Linux is an open-source operating system, which means it is not owned by a single company and is available at no cost. Open-source software makes its source code, essentially the nitty gritty nuts and bolts part of the program, available to anyone who would like to see it. Programmers are encouraged to work with and change the code as they see fit, in the hope that having many "eyes" looking at the code will streamline and improve it. Proprietary software, such as Microsoft Windows, keeps this code secret and inaccessible to programmers who are not authorized by the software development company. One of the disadvantages of Linux is that, because no one company is responsible for it, technical support is not easily found. Users might find help from various resources such as user groups and Internet communities. Alternatively, some software companies have chosen to develop and sell a version of Linux that includes a warranty and technical support as a way of alleviating user concerns. Linux is rarely used by novice computer users, although it is popular among developers and other technologically-advanced individuals. Figure 1.20 shows an example of one version of the Linux operating system. 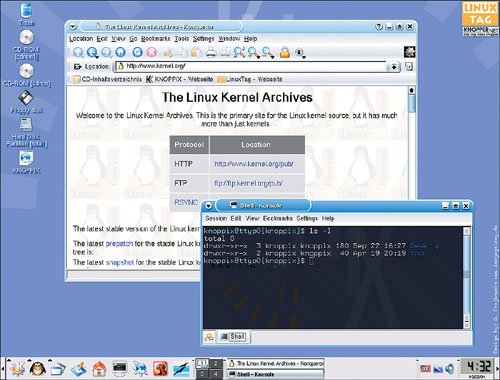 Utility Programs Operating system software is the most critical software on the computer, because nothing can run without it. However, utility programs are another important component of system software. These small applications handle myriad important tasks having to do with the management and maintenance of your system. Some of these utilities are bundled with the operating system; although others are stand-alone versions you can purchase or download for free. Some utilities manage system resources, while others might handle such tasks as file compression or virus protection. Figure 1.21 displays a variety of utility programs that ship with Windows and compares them with similar stand-alone products and describes their function.

Although you interact with system software every time you use the computer, in some ways you don't really notice it. Application software, on the other hand, is comprised of programs that enable you to accomplish tasks and use the computer in a productive manner. System software is like breathingyou need to do it to live; however, you don't usually think much about it unless something goes wrong. Using application software is similar to a musician picking up her flute and, with the help of her breath, creating a beautiful melody.

There are many different kinds of application software, though they often fall into one of several general categories, each of which has a different purpose. These categories include financial and business-related software, graphics and multimedia software, educational and reference software, entertainment software, and communication software. You might be most familiar with productivity software, which includes the following applications:

Although it is possible to buy any of the previous applications separately, most software manufacturers, including Microsoft, Corel, and Lotus, also group applications together into a package called a suite. This can be an economical way to purchase software if you need some or all of the programs in the suite. The cost of a suite is usually less than the total cost of purchasing each of the applications individually. Additionally, because products from the same company have many common elements, such as basic window design and layout, toolbars containing similar tools, dictionaries, and media galleries, many users find this familiarity makes it easier to switch between the programs in a suite.

As mentioned earlier, there are many different types of application software besides productivity software, each one with a specific function. You might use Microsoft Publisher or QuarkXPress to create a newsletter or brochure. Bookkeepers rely on special accounting packages such as Peachtree Accounting or QuickBooks to balance the books and handle other accounting functions. Graphic designers turn to packages like Adobe Photoshop or Adobe Illustrator to develop creative artwork. To identify other software programs and their uses, visit a home electronics or discount store to see which programs they stock, or browse the shelves of your local bookstore for some of the latest "how-to" information.

Chapter One. Creating a Worksheet and Charting Data

Chapter One. Getting Started with Access Databases and Tables

Chapter One. Getting Started with PowerPoint 2003

Chapter One. Using Access Data with Other Office Applications

Chapter Three. Using Excel as a Data Source in a Mail Merge