As discussed earlier, computers and the various peripherals that are connected to them are called hardware. However, connecting one computer to another creates a network. Networks consist of two or more connected computers plus the various peripheral devices that are attached to them. Each object connected to a network, whether it is a computer or a peripheral device, is known as a node. Some of the benefits of computer networks include the ability to share resources (such as printers and scanners) and software, and improved communication and data sharing. Computers can be connected to a network in several ways. They can use existing telephone wires or power lines, or use coaxial, UTP, or fiber-optic cable. Networks can also be wireless, in which case they use radio waves instead of wires or cables to connect.

A computer network that connects computers reasonably close together, such as within a home or in a small office or business, is called a local area network (LAN). Usually these networks are contained within a single building or group of adjacent buildings. If the network begins to cover a larger geographic area or begins to include other networks, it becomes a wide area network (WAN). An example of this is the network used by Penn State University. Penn State has many campuses located across the state of Pennsylvania. Because the different campuses are connected through a WAN, students and teachers are able to use a computer in one location and access files or resources located at any of the other campuses, wherever they might be located. Both LANs and WANs can be wired or wireless. Wired LANs might use phone lines or cable connections, while wired WANs might use phone lines, satellites, or special leased lines, known as T-1 or T-3 lines, for high-speed communication. Did you realize the Internet is actually the largest network of all because it connects computers all over the globe?

Networks can be configured in several ways. There are two main categories: peer-to-peer and client/server. Peer-to-peer or P2P networks are most commonly found in homes and small businesses. In a peer-to-peer network, each node on the network can communicate with every other node. Peer-to-peer networks are relatively easy to set up, but tend to be rather small. This makes them ideal for home use, although not as desirable in the workplace. If a network has more than ten nodes, it is generally best to use the client/server network instead. Remember that a node can be a computer, printer, scanner, modem, or any other peripheral device that can be connected to a computer. Therefore, it isn't difficult to find more than ten nodes in an office or business setting. Client/server networks typically have two different types of computers. The client computer is the one most people directly interact with. This is the computer used at your desk or workstation to write letters, send e-mail, produce invoices, or perform any of the many tasks that can be accomplished with a computer. In contrast, the server computer is typically kept in a secure location and is used to manage network resources. Sometimes servers are dedicated and are assigned specific tasks. For instance, a Web server is used to deliver Web pages, a file server is used to store and archive files, and a print server manages the printing resources for the network.

Network topology describes the different types of network architecture used for client/server networks. Just as there are different sizes and styles of buildings that are designed for different purposes, networks are designed to be physically configured and connected in different ways. The three most common layouts are explained in the following list. Figure 1.27 shows an example of each of these layouts, while Figure 1.28 discusses the advantages and disadvantages of each of these topographies. 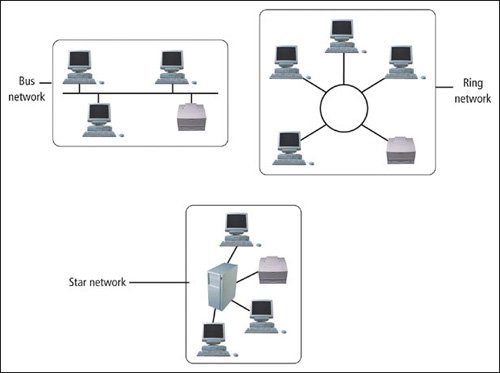 Chapter One. Creating a Worksheet and Charting Data

Chapter One. Getting Started with Access Databases and Tables

Chapter One. Getting Started with PowerPoint 2003

Chapter One. Using Access Data with Other Office Applications

Chapter Three. Using Excel as a Data Source in a Mail Merge