After reports are imported into or referenced from a Visual Studio .NET project, the next obvious step is to have a way to view those reports. This section covers report viewing in Windows Forms applications.

Windows Forms is the new .NET technology for building rich-client applications. It is the evolution of the COM and ActiveX platform that Crystal Reports was so popular in. When it comes to .NET, Crystal Decisions decided to write a native .NET control based on the Windows Forms technology. This control is simply called the Windows Forms Viewer. Its corresponding class name is CrystalDecisions.Windows.Forms.CrystalReportViewer.

Like other Windows Forms controls, this control ultimately inherits from the System.Windows.Forms.Control class. It has many public methods and properties that enable you to drive the appearance and behavior. In addition to these runtime capabilities, the Windows Forms Viewer has design-time support to increase the efficiency and ease of using the control. The control can be found in the toolbox on the Windows Forms tab. You can see what the control looks like after being dropped onto a form in Figure 29.3. 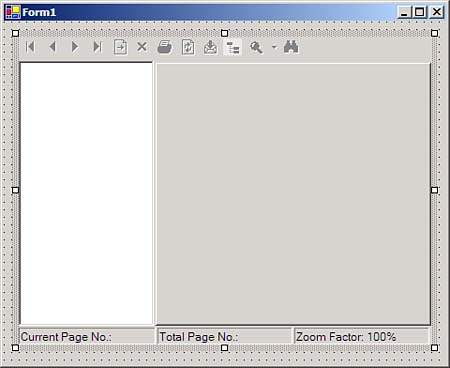 Because the viewer can generically accept report filenames and report objects, a single viewer can be reused for viewing multiple reports. One of the ways you could handle this is to create a form dedicated to report viewing. This form would contain the Windows Forms viewer. To easily invoke this form and pass in a report source, make the viewer a public variable and then create a shared method to accept a report source as an argument. An example of this function is shown here:

After this is in place, to invoke the report viewer from anywhere in the application, use the following code:

There are many properties and methods of the report viewer that can be used to customize its appearance. The first level of customization is to show or hide the individual components of the viewer. The group tree on the left side can be shown or hidden via the DisplayGroupTree Boolean property. The toolbar works the same way via the DisplayToolbar property.

In addition to hiding the entire toolbar, each button or button group on the toolbar has corresponding properties that allow them to be individually hidden or shown. These properties can be found in the property browser or accessed via code. They all start with Show, such as ShowExportButton, ShowPrintButton, and so on. The names should be self-explanatory.

There is a status bar at the bottom of the viewer that does not have a corresponding show/hide property. It tends to not add a lot of value and end up more of an annoyance than anything. A trick to hide this status bar is to drop a panel control onto the form and drop the viewer onto the panel. Set the viewers Dock property to Fill so that the viewer always sizes itself to the size of the surrounding panel. Then set the DockPadding.Bottom property of the viewer to -20. This sizes the height of the viewer to 20 pixels more than the panel, effectively hiding the status bar below the extents of the panel. Keep in mind that any methods and properties that need to be accessed from the report viewer after youve done this need to be accessed via the panel objects controls collection. Figure 29.4 shows the report viewer with no group tree, no toolbar, and the status bar hidden.

Figure 29.4. The Report Viewer is shown here with its status bar hidden. 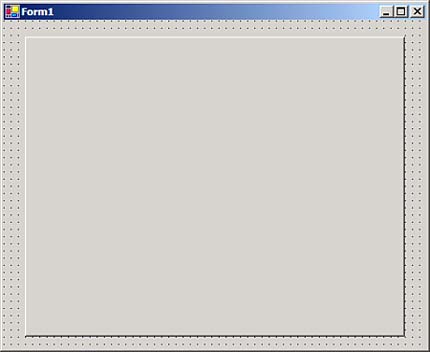