For a discussion of InfoObjects, p. 519

The high-level syntax of this statement is as follows:

Properties begin with SI_, for example, SI_ID, SI_NAME. They describe the objects properties. Generally, CI_INFOOBJECTS is the table that is used for all queries. The WHERE Condition can be used to filter to a collection of objects coming back.

The following list describes some of the more useful properties that can be queried for:

A very useful tool provided with Crystal Enterprise enables system administrators and developers to directly query the system without writing code. The Query Builder is available under the Client Samples section of the Crystal Enterprise Desktop Launchpad. To try it out, start the Query Builder and enter a query into the query window. After it is entered, click the Submit Query button. Notice that the logon information supplied to the Query Builder application affects the returned resultset. Try using a specific user account with restrictions to a particular folder or object. Note that information for those objects is not returned in the query.

Listing 34.12 queries Crystal Enterprise for all reports. After it has the collection of reports back, it loops through each one and prints out its name into the resulting ASP page. Figure 34.1 shows the output of this ASP page.


Figure 34.1. The output of Listing 34.11 shows all reports held in Crystal Enterprise. 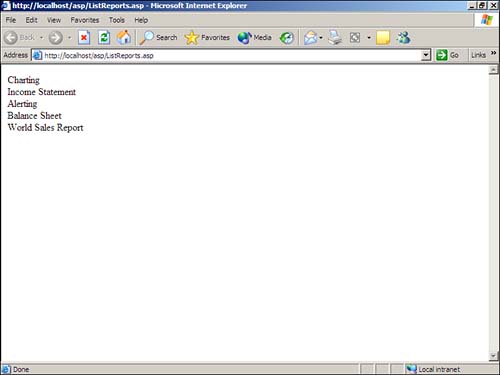 On a relatively empty system, listing all reports in a single list might be feasible; however, in larger implementations, showing all reports is generally not a great idea for a couple of reasons. There might be too many for a user to search though, and it is an expensive operation to bring back all report objects, where perhaps the user only wanted to look at a few of them in the list. Some more efficient ways of listing reports are to show them in their folder structure. Listing 34.13 starts at the root folder in the system and shows only objects at that level. A hyperlink is used to refresh the page with a different folder level and thus drill-down into that folders contents.


With some creativity, using only the ID, Name, ParentID, and ProgID properties, a great number of user interfaces can be produced. They might show reports by folder, by name, by type, and so on.

As previously covered in this book, when Crystal Enterprise has finished processing a report, the resulting report with its snapshot of data is stored as an instance in the Crystal Enterprise system. To retrieve these instances, its necessary to query the system.

Like a folder and its content, hierarchically, a report and its instances have a parent-child relationship. Its possible to retrieve the instances of a report by querying for objects with SI_PARENTID property equal to the report objects ID.

Given a report with ID of 234, entering the following query retrieves its instances: