Ask British people—even educated ones—what they know about British history, and the odds are that you will receive a creditable account of what has happened since 1066—the Norman invasion—and a somewhat sketchier description of life in Saxon and Viking times. The Roman invasion (55 B.C.) may well be recalled, but any knowledge of British life in Celtic times is likely to be restricted to vague references to Boadicea; woad, a blue dye; and Stonehenge. Ask about earlier periods and you will draw a blank. Yet archeologists tell us that Britain has been inhabited (by humans) for approximately 500,000 years, indicating that her people are ignorant of 99.5 percent of the islands’ cultural development. Indeed the British seem to organize the study of history (certainly as it is taught in schools) according to a timetable of military activity. The benchmarks are the Roman invasion, 55 B.C.; the Saxon invasion, A.D. 350; Viking incursions, 900; the Norman Conquest, 1066; the Thirty Years War, 1618–1648; the Crimean War, 1853–1856; the Boer War, 1899–1902; the First World War, 1914–18; and the Second World War, 1939–45. This is not to say that Britons have not made outstanding contributions to human cultural development in the fields of aesthetics, invention, societal organization, and technology, but these contributions do not serve as benchmarks in the same way.

If we consider the cultural awareness of other Anglo-Saxon peoples, we find that historical chronology has served to limit their knowledge to even briefer recollections. American history has been well documented since the arrival of the Mayflower, but little is generally known about the Aztec and Inca empires and hundreds of other Native American tribes from their arrival in North America about 12,000 B.C. up to the beginning of the second millennium. Similarly, the 40,000- to 50,000-year dreamtime of the Australian Aborigines is only vaguely recalled by modern Aborigines and white Australian scholars.

Westerners devote most of their attention to historical events that have occurred since the birth of Christ, even though the emergence of writing in the Fertile Crescent (Sumeria) in 3000 B.C. provides us with an overview of happenings in Mesopotamia and Egypt for the three millennia before the Christian era. Furthermore, most Western world history books confine themselves largely to European history and take up the history of other peoples only in terms of their contacts with or colonization by Western Europeans.

It would come as a surprise to many Westerners to learn that for the greatest part of recorded history, the most populous, influential, and technically advanced country has been China. Animals and plants were domesticated in Britain around 3500 B.C., but this accomplishment was contemporaneous with similar developments in the Andes and in Amazonia and had been preceded in China and the Fertile Crescent by about 4000 years! In other words 99.9 percent of the five-million-year history of the human species is missing, or at least gets only the most minuscule attention by modern historians.

What does this mean for the cross-culturalist who seeks the roots of culture from their earliest origins? One might say that the most recent events in a country’s history are the ones that will be most significant in terms of influencing the culture. This, however, is only true to a degree. While Japan’s traumatic defeat in 1945 did much to change modern Japanese attitudes toward war and peace, the significant roots of Japanese cultural behavior go back at least two thousand years and in the case of China, at least five thousand years.

In fact the real roots of culture—for all of us—are much older than that. The supposed emergence of early humans in Africa more than five million years ago gets pushed back each decade by the astonishing revelations of scientists and archeologists. We know a lot about the social behavior of the men and women of two million years ago, and the traits and characteristics that have been passed on to us genetically constitute a pattern of inheritance separate from our subsequent cultural evolution (see diagram on page 4). These genetically inherited characteristics are not national or regional, nor are they taught by any authority. They are universal traits that every nationality or cultural group shares in common. They are qualities that have been bequeathed to us by our hunter-gatherer ancestors. 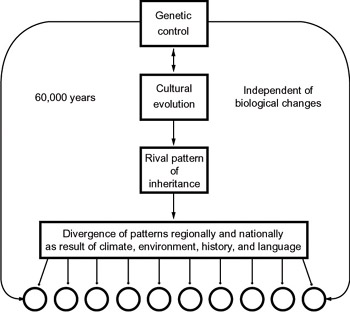 What were the traits of our nomad forebears? To begin with, they lived and worked (hunted) in groups, learning the benefits of cooperation and solidarity. They were grateful for help and favors and were angry about injustice. They wanted to be liked; friendship and family support were important, and they loved their young. The roles of the sexes were different. The survival instinct was strong in the face of dangers from wild beasts. Maintaining their way of life necessitated not only cooperation and collusion but also the ability to communicate quickly and sometimes to deceive. Because weapons and tools were vital, these early nomads acquired inventiveness and a do-it-yourself mentality. They were resourceful, shared strategies, and together solved major problems; for example, they learned to cope with the cold, control fire, and ultimately go to sea. Their keen inventiveness was allied to a sense of aestheticism; we have examples of their art over the last 50,000 years in magnificent Australian Aboriginal paintings and glorious murals in Lascaux and Altamira.

What, then, has come down to us? It is a fact that all people living today love their children, want to be liked, are grateful for favors, are angry at injustice, will cooperate or deceive in order to survive, and have a desire to procreate. The majority want to “belong” to one kind of group or another, and most people claim family as their first loyalty. Artistic sense still unites all cultural groups. 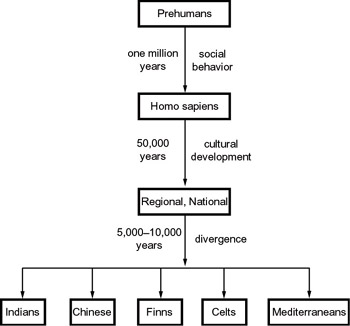 What is comforting about genetically inherited traits is that they are, almost exclusively, positive. They can unite people who differ dramatically in terms of conscious cultural evolution. The suspicious, unsmiling Russian, uneasy with the initial flashing (Hollywood) smile of the American businessperson, is quickly won over by the exchange of their young children’s photographs. Greeks and Turks are united in their admiration of Ephesus. The Chinese, Japanese, and Koreans, not always the best of pals, share art. And the school bully who hits a smaller boy provokes anger in Britons, Mexicans, and Tongans alike.

The current divisions and antipathies deriving from differing national versions of cultural programming lead to dissension, rejection, hostility, and often war. The enduring altercations between Greeks and Turks, Jews and Arabs, the English and the Irish, and the Japanese and Koreans are well documented and have not been satisfactorily resolved at the turn of the century. What we know from early history and can surmise from our knowledge of prehis- tory is that many modern types of prejudices did not exist then, or at least were far less damaging to our early ancestors. They probably killed others to survive, but their behavior does not seem to have been caused by some kind of cultural or traditional hatred or programmed antipathy. Tribal wars were often symbolic and frequently only demanded one killing per side. Sacrifices for this symbolic role were often volunteers. Fanaticism and suicidal stance in war came only with organized religion. Collusion between politicians and priests produced the manic fervor that caused the Crusades to continue for over a century. Early humans would have thought the whole affair somewhat ridiculous.

The universal traits we all possess lead some people to the conclusion that “all people are really the same.” This is, of course, quite untrue, as anyone who sees Finns and Italians socializing or Americans and Japanese negotiating will readily perceive. Nevertheless, all human beings probably have a common origin, and it is indeed a remarkable phenomenon, or even achievement, that over a period of two million years, a plethora of innate characteristics survive to give humans a basis for mutual understanding, eventual friendship, and consequent survival. National or religious “programming” occasionally urges its adherents to exterminate their enemies. Genocide has occurred in Tasmania, Rwanda, and other places. The cultures of many Native American groups and Australian Aborigines, though not currently targeted in this manner, have precarious futures.

Why did human mental programming differ so amazingly? What led to drastically diverging values, opposing codes of behavior, and enduring prejudices and hatreds?

In order to consider these diverging cultural streams in some kind of context, we must go way back in history and prehistory. The roots of culture align themselves to some extent with the routes of culture (see diagram on page 8), that is to say, we must follow the emergence of humankind, beginning with its separation from apes and chimpanzees and leaving Africa to migrate first to the Middle East and Southeast Asia, then to Europe and other parts of Asia, and ultimately to Polynesia, Australia, and the Americas. Half a million years ago, when the first humans reached Europe, they were not Homo sapiens, only Homo erectus, but human culture had begun to develop and disperse.

Over the million or more years when early human groups departed from Africa, they took different routes, went in different directions, and moved at different speeds. Some of these migratory groups would not meet again until 1788 (Europeans and Australian Aborigines). Others would have repeated contact and influence each other culturally (North Africans, Europeans, and people in the Fertile Crescent). Perhaps the most interesting historical “rendezvous” is that of the people who headed for the Far East a million years ago, splitting from those who went west into Europe. The eastbound group(s) eventually acquired Asian characteristics and qualities. They crossed the Bering Strait in 12,000 B.C. and finally met up with their European cousins as Blackfeet, Cherokee, Sioux, Incas, and Aztecs in the sixteenth century A.D.! 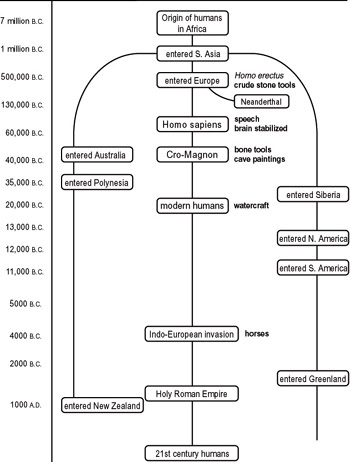 Another interesting aspect of cultural development is the relationship between having had “an early start” and present power or dominance. This is a complex matter. Our origins in Africa do not seem to have bequeathed any significant advantages to African cultural life. The head start gained by the Fertile Crescent, especially in agriculture and settled living, was lost. Europe is still far from being unified, and the United States has been a cohesive force for only one hundred years at the most. China stands out as the only major country with impressive cultural, linguistic, political, religious, and philosophic unity, unbroken for five thousand years. There are some geographic reasons for this. In general, however, cultures have waxed and waned, affected by a complex interplay of influences from the four basic roots: geographic environment and climate, religion, language, and historical happenings. The particular routes followed by different groups were also of major significance, inasmuch as great varieties of climate, overland and maritime challenges, ethnic contacts, soil fertility, abundance of game, and ultimate choice of settlement dictated the final destinies of each band, tribe, or nation.

In the next two chapters as well as in other, later chapters, I will examine in depth the influence of climate and environment, religion, and language in cultural development. (See the diagram on pages 10–11, which outlines those influences and prefigures many of the topics to be discussed later.) At the beginning of the twenty-first century, we have a minimum of two hundred different cultures, and we speak four hundred to five hundred different languages, with thousands of diverging, entrenched values and core beliefs! The first years of the twenty-first century seem to herald an age of globalization and standardization of values and modes of behavior, especially in the area of international business. This would indeed be a source of gratification to our less polemical ancestors, the honest and uncomplicated hunter-gatherers of two million years ago. Are cultures really aligning themselves? Will national prejudices disappear? Will the twenty-first century be the end, not of history, but of irrelevant cultural diversity? 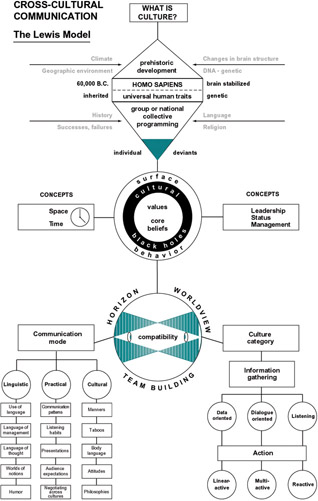