Extending a Track with Expressions

Has your track point disappeared in the middle of the shot? Perhaps it is part of an object that moves off-screen. Or it's possible that your track point was completely obscured for several frames, during which the tracker was unable to extrapolate motion.

Other effects software might include a built-in option for continuing the track, but in After Effects, a simple expression will do it. This works properly only when the tracked item travels more or less steadily in more or less a linear direction. A classic example is a character or object crossing frame: Any point you track may exit (or enter) frame early (or late) compared to the target (Figure 8.31). This shot appears in the 08_tracking.aep composition on your disc.

Figure 8.31. The door handle of the taxi is an effective track target, but to replace the sign on top of the cab, the track must extend beyond this frame (after which the door handle exits frame) Note that the track points are fairly evenly spaced, making this a good candidate for continuing the track. 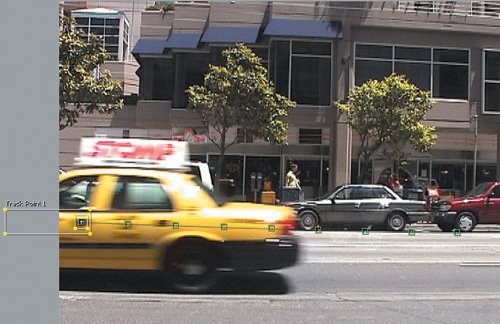 Following is the simple trick to extend a Position track; for a more thorough explanation of what's going on, and variations on the theme (looping incoming frames, repeating a movement pattern, or looping in and looping out) visit Chapter 10.

This technique will work in any case where the last two frames of animation reflect a delta (change) in values. Chapter 10 shows other types of available loops, as well as the ability to loop in, or to loop both in and out, which is technically what's needed for the taxicab (which enters and exits frame).

First make certain there are no unwanted extra tracking keyframes beyond the point where the point was still correctly tracked; this expression uses the difference between the final two keyframes to estimate what will happen next.

Reveal the property that needs extending (Position in this case), and Alt/Option-click on its stopwatch. In the text field that is revealed, replace the text (position), typing in loopOut("continue"). Yes, that's right, typing; don't worry, you're not less of an artist for doing it (Figure 8.32).

Figure 8.32. The raspberry-colored stand-in for the replacement sign exits frame with the tracking null below it. In the Graph Editor, the dotted line shows that the expression is maintaining a steady Position change of around 2000 pixels per second. 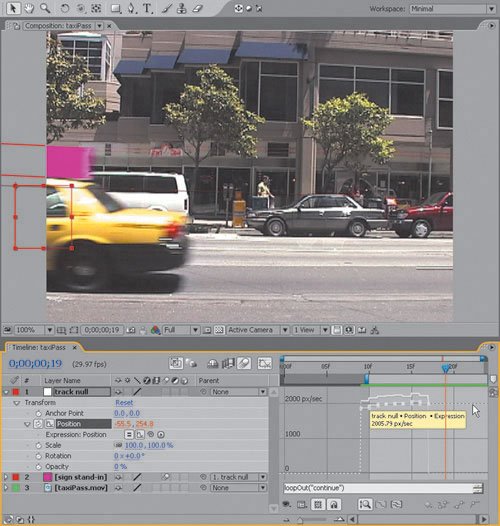