As you may already know, versions 6.0 and 6.5 of After Effects introduced two new layer formsadjustment layers and guide layersthat are easy to use and seem simple enough on the surface. Each has vitally useful applications, however, that might not be immediately apparent.

There are only a couple of major gotchas to watch out for with adjustment layers. Always keep in mind that their timing and Transform properties still apply.

In other words, make sure that your adjustment layer starts at the first frame of the comp and extends to the last frame of the comp (or the start and end frames of the portion for which you need it), otherwise its effects will pop on and off unexpectedly. And if you set any transforms to the adjustment layer, make sure they are intentional, as the boundaries of these layers are still respected in the rendering process. Finally, if you enlarge a composition you will probably have to resize any adjustment layers as well.

Any layer in your Timeline can become an adjustment layer. An adjustment layer is itself invisible, but the effects applied to it affect all layers below it in the stack; it behaves just like an effect filter node in a node-based compositor such as Shake. This elegant, profound feature is too often overlooked, perhaps because it is fundamentally so simple, yet it has many uses.

To convert a layer to an adjustment layer, toggle the feature in the Switches column (Figure 4.9). The more typical approach, however, is to create a new layer specified as an adjustment layer from the get-go. Context-click in an empty area of the Timeline, and choose New > Adjustment Layer (or do the same from the Layer menu).

That's easy enough (although, alas, it has no keyboard shortcut). So what's so cool? What can you do with adjustment layers that you can't with normal effects?

For one thing, you can effectively dial back any effect in an adjustment layer using Opacity. An effective quick fix, this is the equivalent of a dissolve operation in a node-based compositing application. Most effects do not include the ability to be dialed back, even though it makes perfect sense to do so in many cases. Colorize your scene using Hue/Saturation, and the supervisor says, "Dial it back 50%." Set the adjustment layer's Opacity to 50%, or even dial it up and down before the supe's very eyes. Impressive.

You can also add mattes or masks to adjustment layers, delineating specific holdout areas for effects. This avoids precomposing in situations where it is undesirable. Instead, a track matte layer containing the necessary transparency information will do; the adjusted layers themselves can even serve as the track matte (Figures 4.10a and b).

Figures 4.10a and b. The highlights on the wing of the plane have been bloomed warmer by first creating a luma matte that isolates only them (a). This is then applied as a Luma Track Matte to an adjustment layer containing a colorization effect that makes the highlight areas rosy; this is then dialed back using the Opacity control of the adjustment layer (b). 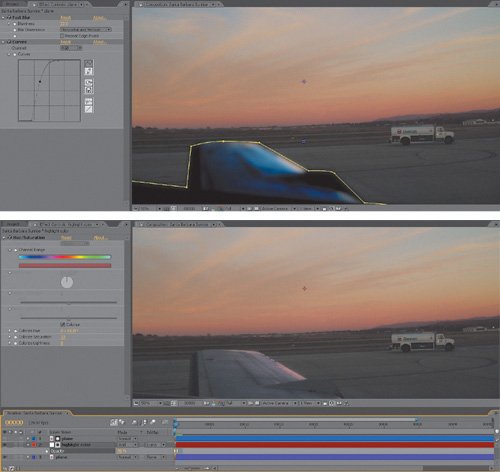 Like adjustment layers, guide layers are normal layers that behave differently when toggled on. In this case, a guide layer appears in the current composition but disappears in any subsequent compositions into which it is nested, nor does it render by default. Its visibility setting is not a worry if you want it never to appear in your output.

This feature is useful when you add anything to help your compositing process that you would never want to see in the final render. Examples include custom backgrounds that make it easy to judge edge detail or adjustment layers that "slam" the levels of the composition to see if its layers still match (more on that in Section II).

There are lots of creative uses of guide layers. Is there something you always forget to do before rendering? Add a text layer with a big note to yourself in the Render Comp and make it a guide layer. Another great usage for guide layers is with intermediate view LUT's, which are discussed beginning in Chapter 11, "Film, HDR, and 32 Bit Compositing."

You can toggle any type of layer into a guide layer either by context-clicking it or by choosing Guide Layer from the Layer menu. Within the current comp, you'll notice no difference (Figures 4.11a and b). You can still apply effects to this layer or have other layers refer to it, and it is fully visible. Nest this composition in another composition, however, and the guide layer disappears.

Figures 4.11a and b. Shown are a couple of effective uses for guide layers: displaying a matted element against an gradient, without worrying that the gradient will show up when the element is used (a), and in combination with an adjustment layer to "slam" a composition (b), revealing flaws in the matte edges, whether the blacks match, and so on. 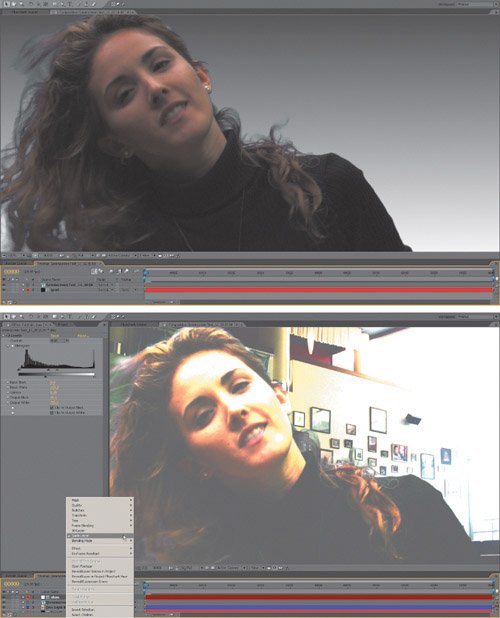 If you decide you want guide layers to appear at render time, there is a toggle to do so in Render Settings. This does, of course, sort of defeat the whole purpose, but at least the option exists.