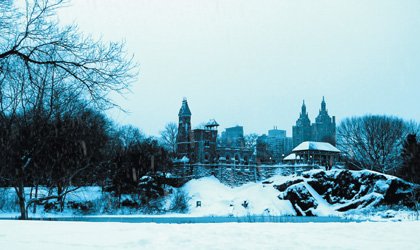 Conversation about the weather is the last refuge of the unimaginative.

W. S. Gilbert, The Pirates of Penzance, or, The Slave of Duty

Even if you're not called upon to re-create extreme weather events such as those depicted in The Day After Tomorrow, climate conditions along with natural elements of water and wind are a constant in dramatic storylines. You may need to re-create these effects from scratch, or you may be called upon to subtly tweak what's already in the shot.

This chapter will give you some pointers on creating such natural elements as particulate matter in the air, replacement skies, mist, fog, smoke, the effects of wind, and water in its three states.

Why would you want to do this? Simply because the crew couldn't get the conditions the story required on the day of the shoot? In extreme cases, yes. But actually, any large exterior shot will exhibit some sort of meteorological influence, and everything in the shot (and sequence) is interrelated. This chapter investigates phenomena that you can influence or even replace wholesale, including

It's rare indeed that weather conditions cooperate on location, and even rarer that a shoot can wait for perfect weather. Transforming the appearance of a scene using natural elements is one of the most satisfying things you can do as a compositor. The before and after comparison alone can be stunning, and the result can be worthy of a blockbuster film.