Perhaps the most useful feature unique to expressions (one that users who won't touch expressions beg for) is the ability to loop a set of keyframes. It's so easy to learn and powerful, however, that once expressions-phobes understand it, even they start to like it.

Version 7.0 has made saving expressions for reuse easier than in the past via a very simple change; for cases in which the expression uses no keyframe data, you can now save an Animation Preset that contains only the expression, not the static value of the property.

All you have to do to take advantage of this feature is to choose Animation > Save Animation Preset for a property with no keyframes. Only the expression is saved.

In some cases, all you need to do to create a loop is to replace your source expression text with a default loop expression. These are found in the Property submenu of the Expressions menu (Figure 10.9).

Figure 10.9. Try not to be overwhelmedthe expressions menu is a well-organized cheat sheet of After Effects keywords. Once you understand its basic organization and most useful items, you can browse with confidence. The Property submenu, shown here, contains several essential functions. 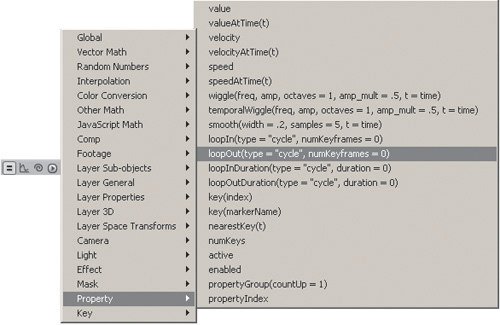 The loop effects have two arguments, the settings found in parentheses after the command. The first one is mandatory; you must specify the type of loop you're requesting by choosing one of the three loop typesand here is the major flaw, as only one of them appears as an option in the menu, and it's not the most useful one of the three. The second argument, specifying how far the loop extends, is optional (and in some cases, unavailable).

An example in which you can use the default expression is a blinking light, animated via keyframes in its Opacity property. To blink, these keyframes animate from 100% to 0% and back, then repeat. 10_loop.aep contains a light layer set to blink.

The Expressions menu is a bit overwhelming to the uninitiatednearly two dozen submenus with several entries each. How do you know where to find anything?

So don't worry, it's not as gnarly as it first appears.

To begin, create one cycle of this animation, start to finish. You might start with a keyframe of 0%, then 100% a couple of frames later, and 0% again about a second after that (Figure 10.10).

Figure 10.10. A light is set to blink on the mixing panel, but only one cycle of on to off and back to on has been keyframed (with an offset and an ease to give it character). The rest will be done with expressions. 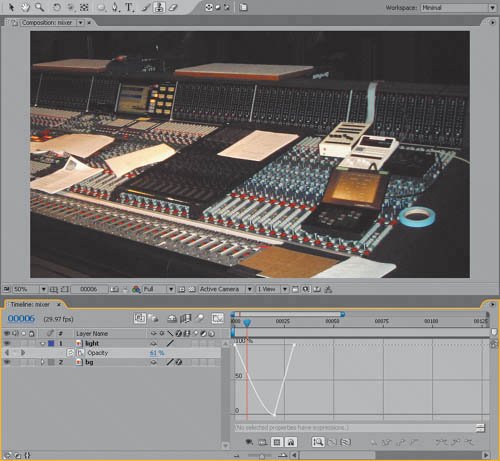 Now set an expression for Opacity, and with the default expression still highlighted, choose

Press the Enter key or click outside the text area. The keyframes now loop, as can be seen in the Graph Editor (Figure 10.11).

Figure 10.11. A simple loop expression is applied. The pattern repeats in the dotted lines, where the expression has taken over. The default expression (chosen from the menu per the instructions) would work, but unnecessary arguments have been removed here to shorten it (see the sidebar, "Extraneous Verbiage"). 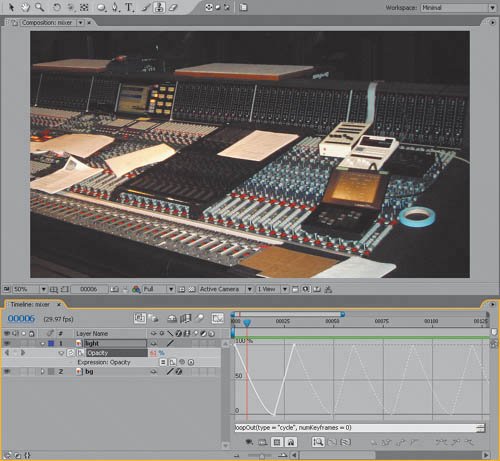 Before moving on to other looping options, check out the other arguments you can set for this expression. For example, numKeyframes specifies how many keyframes before the final one are used in the loop; set to the default of 0, it uses all keyframes. You can get rid of this argument altogether in such a case (see the sidebar, "Extraneous Verbiage"), leaving loopOut("cycle") to yield the same result. Set numKeyframes to a value of 1 and it uses the last two keyframes only (Figure 10.12).

Figure 10.12. Giving the second argument (numKeyframes) a value of 1 actually causes loopOut to use the last two keyframes only (because a one-frame loop is impossible, I suppose). This makes looping only a portion of a more complex animation possible. 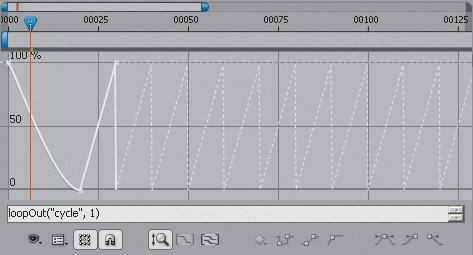 For loopOut("cycle",0) to work properly, the last keyframe value must match that of the first keyframe, or the loop will be missing its first frame. This can be frustrating if you don't know the secret, and it only seems to be a problem with the "cycle" version of loopOut().

How can two expressions

achieve the exact same result? Here's a quick explanation: Expressions don't do a lot of hand-holding in terms of telling you what to enter and where, but the default settings sometimes come with extra keywords that are totally optional; their only purpose is to remind you what the values are for. In the case of this example, not only are the keywords "type =" and" numKeyframes =" optional, but the whole second argument will default to 0 if it's missing.

Now how the heck would you know this? After a while, you start to anticipate it because it's somewhat standard. As you begin, however, the only way to know it is to read it in a book like this one. Sad, but true.

Now, back to that fundamental flaw. There are, in fact, three types of loops, not just one, but the other two cannot be found in the expressions menus (they are hidden in the help documentation):

Of these three, continue is the one you are likely to use the most; in fact, continue loops are among the most useful expressions period, so they get special treatment in the next section. Meanwhile, the pingpong option is like cycle except that it alternates looping backward and forward (Figure 10.13). 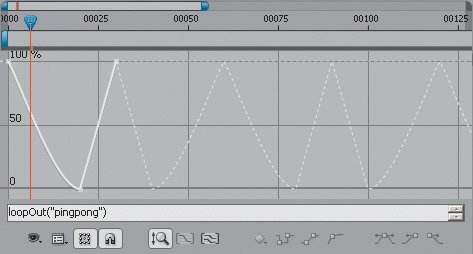 As for the other loop types available, loopIn("cycle") provides a method to create a loop that precedes the existing keyframes, rather than following them in time (Figure 10.14). Both loopOutDuration() and loopInDuration() enable you to specify an interval, in seconds, between loops. For example, loopOutDuration("cycle", 2) cycles a loop every two seconds.

Figure 10.14. A loopIn() expression works just like a loopOut with the simple difference that the loop precedes the keyframes. 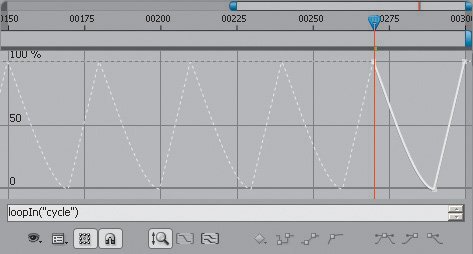 Although a cycle is intuitively a "loop" in the strictest sense of the worda repeat of what came beforethe continue loop is hands-down the most useful. Chapter 8 contained one use of a continue loop, to extend a motion track beyond the edges of the frame (where the tracker cannot go). Let's draw some clear boundaries around what is possible with continue loops.

There are essentially only two options with continue loops: loopIn("continue") or loopOut("continue"); the second argument is not accepted because continue is looking for two things only: the vector (direction) and velocity of the animation at the first (loopIn) or last (loopOut) keyframe. It causes the animation to proceed linearly along that vector at that velocity, and that's it. It has no understanding of Bezier handle influence, so any curve in the motion is not looped.

Nonetheless, it is useful in any case where you have the basic direction and rate of animation correct and wish to replicate those qualities. And what about a case in which you have the middle keyframes of an animation, but want to continue in and out of them? That situation is covered later in the "Conditionals" section.