Back in the day, if you wanted to go beyond the rather pedestrian Color Difference Key in After Effects you needed a third-party keyer, and for a few years there were two choices: Ultimatte for After Effects (now AdvantEdge, Ultimate Corporation) and Primatte Keyer (Red Giant Software, formerly Pinnacle Systems, and before that, Puffin Designs).

When I label Color Difference Key "pedestrian," I speak as someone who matted hundreds of shots with it, back before there were alternatives in After Effects. Its methodology is fundamental and can be replicated using basic channel math and Levels controls. It provides the exact methodology that was used for early digital composites (in such blockbuster films as Terminator 2), which itself is the digital equivalent of optical compositing (used in Hollywood classics from The Ten Commandments right through the original Star Wars trilogy).

Debuting with version 6.0 Professional was Keylight, a third well-known software keyer popular among Shake users. It remains part of After Effects 7.0 Professional (but as a separate installation, so make certain that you have it). The other keyers have by no means disappeared, and I personally remain a fan of Primatte, which offers a methodology very different from that of Keylight. Working on The Adventures of Shark Boy and Lava Girl in 3D after the previous edition of this book was released, I decided to use Keylight for all of my shots, however, and I never felt compelled to revert to Primatte. Because Keylight is what you have with After Effects Professional, let's focus on that.

Keylight is useful in many keying situations, not just studio-created blue- or green-screen shots. For example, you can use Keylight for removal of a murky blue sky (Figure 6.11). You wouldn't use Keylight to pull a luminance key, however, or when simply trying to isolate a certain color range within the shot.

Figure 6.11. In one pass, with no adjustments other than selecting the sky color, Keylight does an effective job of knocking out the background even around the motion-blurred bird in flight. The sky is nowhere near a perfect blue screen in this case, other than its uniformity: Blue saturation is around 50% and only about double the amount of red.

Keylight is most typically employed when the plate was shot against a uniform, saturated, primary color background, and when preserving edge detail is of utmost importancein other words, most typically (but not exclusively) when working with footage that was specifically shot to be keyed, against a screen of blue or green.

Figure 6.12 shows a process tree that outlines the steps detailed below (also included on the book's disc as keyingFlowchart.pdf). No two complex shots are the same, but something like this approach should help you pull a good matte, regardless of the tools used. The next section reprises these steps, specifically using Keylight.

Figure 6.12. This chart summarizes steps that can yield a successful color key. It is also included as a PDF on the disc. 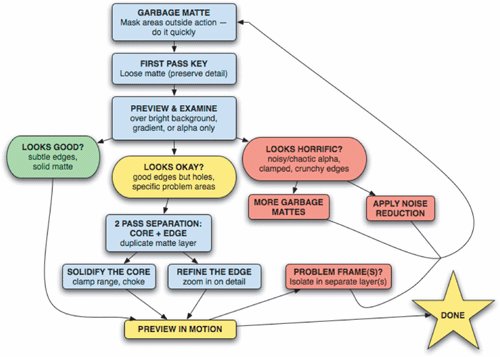 Just in case I'm not yet succeeding in beating you over the head with it, my overall message is: Break down plate footage into separate passes when keying. At the very least, a hard "core" matte to fill holes and an overlaid edge matte to recover detail will often improve radically on a single pass. Extra passes are then applied via masked layers to specific problem areas.

The basic steps are

A holdout matte is an area of an image that is isolated for its own separate treatment. An effective key often involves the combination of two holdout mattes, one for the edge and another for the core.

The question then arises as to how these two mattes should be combined; with this method, it should be a simple matter either of overlapping the two layers or precomposing them so that they make a single alpha channel to be applied as a track matte.

In other compositing programs such as Shake, it's not unusual to employ a third holdout, for the background, but in After Effects this is typically avoided and is hopefully unnecessary. The difficulty is that this third matte must be subtracted, rather than added, and transparency (alpha) information is always combined additively in After Effects.

You can convert all of the alpha channels to RGB (using Shift Channels) and apply the Darken blending mode to the background holdout to subtract, but it is frankly a hassle in After Effects, useful only if no other method of holding out the background proves effective. I have seen ex-Shake users drive themselves completely batty working this way.

This basic approach should work with any tool set. The real underlying point is that the attempt to key a plate in a single pass is typically too lazy. Ironically, it often results in much more work, overall, as you struggle to make all areas of your shot accommodate unified, one-size-fits-all settings.

The version of Keylight that ships with 7.0 is new, although the changes in version 1.1v1 of Keylight are relatively subtle.

The most significant of the Keylight parameters remains the Screen Colour selection (Keylight reveals its UK origins at Framestore CFC with that u). Choose the color to be keyed wisely, and you have a shot at a one-pass result. Otherwise, you may fight an uphill battle the rest of the way. More about how this selection works is found in "The Inner Workings of Keylight" section.

You can follow along with the steps using the blueScrn_mcv_HD.mov footage included in this chapter's Pixel Corps folder on the book's disc. Completed versions of several of the examples from this chapter are contained in the 06_colorKey.aep project.

In the best-case scenario, after creating any basic garbage mattes as usual, you will

Now what? The mask needs animating, and the discoloration to the shirt will have to be dealt with (see the "Color Spill" section). But without too much pain you have a mask that can be used to place this model and her long flowing hair over whatever background you choose.