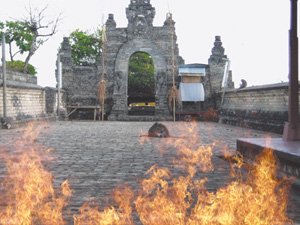 My nature is to be on set, blowing things up.

I have become convinced that a significant number of people first became interested in visual effects work because they qualify as borderline pyromaniacs. Creating fire effects entirely on the computer might not be as much fun as being an on-set pyrotechnician, but hey, keeping these people busy with either job is better than letting them loose on society at large.

This chapter focuses on effects that have traditionally been re-created live on set or via practical elements such as miniatures. The craft of the on-set pyrotechnician is not obsolete by any means, but these days there are many, many cases (particularly the smaller, more common ones) in which compositing can save a lot of time and expense at the shoot, no matter the budget of the production. Blowing stuff up on set is fun, but it involves extensive setup and a not insubstantial amount of danger to the cast and crew, and often you get only one take to get it right.

As a director, I would never subject actors to real gunfire and bullet hits on set unless it was clearly the only way to get the shot. The death of Brandon Lee on the set of The Crow, when a gun loaded with blanks shot an empty cartridge (still in the barrel from a previous shot) into his abdomen, was fully preventablenot only by a more attentive arms or prop master, but by never loading the gun in the first place. At the risk of sounding glib, it is indisputable that compositing could save a life in this scenario.

And gunfire is only where this chapter begins. Equally tricky and dangerous on set are explosive bullet hit squibs, small explosives that must be rigged and exploded by an on-set special effects technician, lest anyone damage soft body tissue. You'll learn how to create those in After Effects as well. From there, you'll move on to the science-fiction equivalent of gunplay: weapons of pure energy, such as the Star Wars blaster and lightsaber or the Star Trek photon torpedo. After that, it's heat distortion, fire, and explosions.

Then, perhaps, a nice, warm cup of tea.

I hope it's not disappointing that not everything pyrotechnical can be accomplished start to finish in After Effects. Some effects require extra preparation of physical or fabricated elements, and all will benefit from your familiarity with good reference. There is, alas, no easy way to create realistic fire or explosions completely from scratch in After Effects, but that does not mean that these are off-limits; they're hard to create on computers, period. Compositing may be the key to making these shots work at all.

And of course, sometimes a storyline calls for the destruction of something that cannot, in real life, be destroyed on any budget. The famous shot of the White House being blown to smithereens in Independence Day is one example, but this limitation was also very much in place on a little known ABC-TV movie called Superfire, whose concept was articulated as "The Perfect Storm, but with fire." Infernos consuming acres of forest were central to the plot, and even if the budget had allowed for purchasing and razing hundreds of acres of wilderness, environmental concernsnot to mention horrendous PRwould in all cases mitigate against it. The solution turned out to be varied: in some cases, to composite fire from scratch; in others, to augment what was already there.

To provide examples, this chapter features stills from low-budget independent films that couldn't afford to create the kind of destruction required on screen. The Last Birthday Card is a short narrative film that Stu Maschwitz created while still working at Industrial Light + Magic. Mark and Matty is a satirical series poking fun at the conventions of action movies with effects (as well as acting), done by Matt Ward, a veteran of Lucasfilm, Industrial Light + Magic, and the late, lamented ESC Entertainment. In both cases, the effects are quick and dirty, not meant even for the level of scrutiny they are afforded via still figures in this book, and intended only to convey the storywhich in both cases, incidentally, features hapless victims pursued by unhinged assassins.