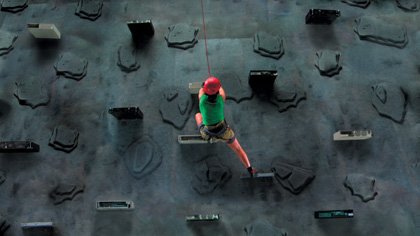 Even if you're on the right track, you'll get run over if you just sit there.

The After Effects tracker is a semi-automated solution for two-dimensional match moving and stabilization; it helps you match the motion in source footage and apply it to target layers or remove camera motion from a shot. Set up correctly, it allows you to click a button and derive matched motion more precise than anything you could ever animate by hand.

It can save you piles of time, too, such as the several months I spent hand-matchmoving several dozen shots for Rebel Assault II using After Effects 2.0, which had no motion tracker whatsoever. The feature wasn't added until version 4.0, allowing me to learn everything I know about keyframe animating. But, having the tracker doesn't mean you get to click a button and put your feet up on the desk, George Jetson style.

First, you need to make sure you're using the tracker to best effect. Some of the most common ways to go wrong would be to

This chapter will help you with the above and much more.

Once you've nailed down these essential techniques, you can move on to some elegant uses of the tracker; you can

Don't forget, the tracker's uses go beyond those clearly spelled out in the Tracker Controls panel (which can always be revealed by choosing it in the Window menu, although it appears automatically upon applying a track).

The tracker is available only in After Effects Professional. If you are using After Effects Standard, skip ahead to the final section of this chapter, which focuses on importing 3D match moves from third-party software.