It's a wry joke in the effects world that you can create any shot using only two effects: Levels and Fast Blur. This sentiment is very punk rock and like most such joking generalizations, while grossly exaggerated, it does contain a grain of truth:

One thing that has improved a great deal with version 7.0 is the categorization of effects. The number of categories overall has been reduced, and effects that relate to color correction now all live in the Color Correction category (which used to be divided between Adjust and Image Control, neither of which had as intuitive a title.

However, you don't ever have to use the Effect menu. The Effects & Presets palette has options for displaying effects without their categories (Figure 1.37). Once you know what you're looking for, listing effects in alphabetical order and searching for them in the palette's Contains field can speed things along a bit. You then apply the selected effect by double-clicking it (if the target layer is selected) or by dragging it to the target layer in the Timeline panel (or to its Effect Controls panel).

Figure 1.37. Looking for all of the blur options in After Effects? Type "Blur" in the field labeled "Contains" in Effects & Presets and only effects with "blur" in the name are revealed. 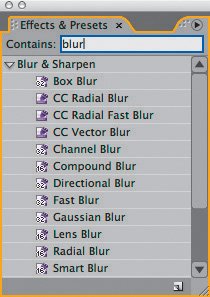 You may have noticed the icons that appear next to the effect names in the Effects & Presets palette. There are six main types: 8-, 16- and 32-bit effects, Animation Presets, Audio, and one you may rarely see, Missing Effects. You may not be working at higher bit depths yet, but it is worth noting which effects are 32-bit ready; for the most part, those are the core After Effects plug-ins, the ones you'll consider using first and most often.

Effects that are capable of supporting 16 or 32 bits also operate at the standard 8 bits per channel. Chapter 11 contains more about the difference between bit depths and how to work with them.

The panel menu allows you to specify which type of effect to list (Figure 1.38). For example, you can show only 16-bit or only 32-bit effects, or you can see the contents of an Animation Preset (what it actually does, step by step). Beware if you set this option, however, because you may find yourself looking for an effect that is unexpectedly hidden from the palette.

Figure 1.38. Wondering which types of blur are capable of working at 32 bits per channel? Type "blur" in the Contains field with the specified options in the panel menu and find out. 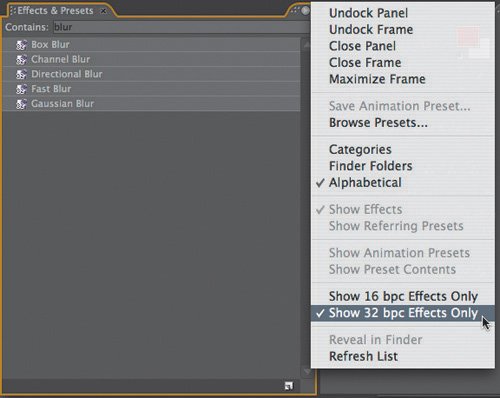 Version 7.0 contains more Animation Presets than its predecessors. These are collections of presets configured by Adobe to create particular types of animation automatically, mostly for motion graphics use. The folder containing them begins with an asterisk, holding its place at the top of the list. Typing "blur" in the Search field yields a long list of presets containing various blur effects. To prevent this, use the Effect & Presets panel menu to turn off Show Animation Presets (or reduce its occurrence by turning off Show Preset Contents.

Animation presets are particularly useful when you're working with a team and sharing standardized practices. You can recognize an animation preset file in your system by its .ffx file suffix; they can be found in the Plug-ins folder, within the same folder where the application itself is found (on Windows, this is a shortcut to the folder, which is stored one level deeper in the Support Files folder).

Prominently new in the 7.0 File menu are the Browse and Browse Template Projects commands. These activate Adobe Bridge, the file browsing utility that was introduced with Adobe Creative Studio.

You may have seen demonstrations in which it can be used to browse for animation presets and template project (.aet) files. If you have the functional content installed, you can try this for yourself (the Browse Template Projects command takes you straight to the templates whereas Browse takes you wherever you were last). The ability to see animated previews of effects presets in Bridge is pretty cool, and the idea of providing a special .aet template format that can be previewed and that cannot be inadvertently edited and saved seems useful.

In After Effects 7.0, however, the use of Bridge with After Effects is clearly in its introductory or 1.0 stage. You can preview video and audio file formats such as QuickTime and MP3, but file sequences do not appear as what they are, an animated clip. Instead, Bridge parses them as a series of individual files, each of them getting its own thumbnail. And those cool animated previews are not available to the populace at large in this version; you only get them with the shipped presets, not with those you create.

Bridge includes the ability to tag files with metadata that can be searched later in various ways; this means it may be worth keeping in mind for very specific uses. More likely you will be keeping your eye on future versions of Bridge to make substantial use of it with After Effects.

In the Effect Controls window or the timeline, select whatever effects and properties you want to save and choose Animation > Save Animation Preset. You can save the preset wherever you like, but for it to show up in the Effects & Presets palette automatically, save it to the Presets folder (the default choice for After Effects, also found in the folder where the application itself resides). In a studio situation, a preset can be distributed to a number of users via this folder. The next time they restart After Effects or update the palette (using the Refresh List command in the wing menu), the preset appears, ready for use.