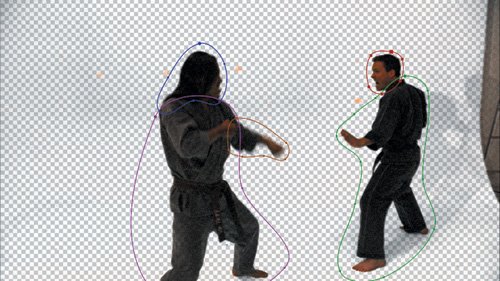 Juxtaposing a person with an environment that is boundless, collating him with a countless number of people passing by close to him and far away, relating a person to the whole world, that is the meaning of cinema.

Color keying is uses a big liepretending a solid color is negative spaceto allow you to place human characters in virtually any location imaginable. Someday perhaps, when we have cameras that can perform full 3D scene reconstructionnot just what the lens lays down in a two-dimensional image, but a scan of the full spatial and temporal information of the scenewe'll laugh about the old days when we used to send actors out on to a mostly empty stage of saturated blue or green.

Not only does this artificial environment create an often challenging situation for the compositor, who must replace every trace of blue or green with subtle transparency, but in some cases it completely psyches out actors. (It's been compared to "acting in a void" or "acting in the desert" and was rumored to be a major reason Liam Neeson announced his intention to retire following Star Wars, Episode One, a statement of frustration he later recanted.)

Meanwhile, as they have for over half a century, blue screens (and their digital-era cousins, green screens) remain the state of the art for situations in which you want to shoot figuresusually actorsin one setting and composite them into another.

Novices often wonder if a background must be blue or green to be keyed. The answer is no. It just happens that blue and green are primary colors not dominant in human skin tones and can be differentiated clearly from most foreground colors, which contain a mixture of all three color channels.

The process goes by many names: color keying, blue screening, green screening, pulling a matte, color differencing, and even chroma keying, a term that really belongs to television (think of a weather forecaster blowing storm clouds across the eastern seaboardthat is, Bill Murray in Groundhog Day).

This chapter covers not only color keying of blue- and green-screen footage but all cases in which pixel values (hue, saturation, and/or brightness) stand in for transparency, allowing compositors to effectively separate foreground from background based on color data.

All of these methods extract luminance information that is then applied to the alpha channel of a layer (or layers). The black areas become transparent, the white areas opaque, and the gray areas gradations of semiopacity, which is where the illusion usually succeeds or fails.

If you're reading nonlinearly, this chapter extends logically from fundamental concepts about mattes and selections in Chapter 3, "Selections: The Key to Compositing." This chapter and the next move beyond fundamentals.