Whether you need to match the natural noise and film grain of your original footage with composited images or add smoke or fog to a scene, you can create most of these useful effects with layers created in Photoshop. It's just a matter of using creative masking, layer Blend Modes, and layer motion to provide realistic results.

Often, when you composite still images with video, you will need to add some "noise" to the still image layer so it more readily blends in with the natural noise in the film or video footage over which you're compositing. There are a couple methods that I've found to work extremely well. One method is creating a noise loop movie that can overlay the still image with variable noise grain size, density, and Blend Modes. Another is using a third-party plug-in from Digital Film Tools, called 55mm Faux Film, which gives you optimal control over the noise size and color balance.

As mentioned previously in this book, I've created a noise loop using only a few Photoshop layers and animating them in ImageReady and QuickTime Pro. You can easily follow along with this simple process:

Applying the Noise Loop in After Effects

As discussed in Chapter 10, "Motion Matte ‘Painting’ in Photoshop," I used the noise loop movie to add noise to the static image layers in After Effects. I simply imported the movie as footage and placed it in the Timeline just below the blue-screen video footage layer and adjusted the Opacity to 50% (Figure 14.5). To turn the layer into only visible noise, I set the layer Blend Mode to Multiply and made the layers above visible to check for a match in the grain. 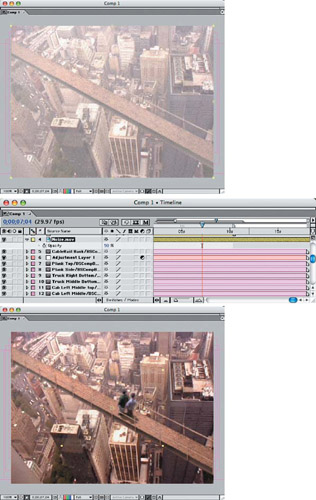 Figure 14.5: Place the noise layer above the static layers in After Effects and set the Blend Mode to Multiply.

In Chapter 9, "Static Matte ‘Painting’ in Photoshop," I used a third-party filter from Digital Film Tools called 55mm Faux Film. This filter offers a lot of controls, such as grain color, size, and brightness.

In the After Effects project, I selected the static image layer that has both detailed and wide area coverage across the frame and applied the 55mm Faux Film effect (Figure 14.6). It's pictured here isolated from the rest of the composite to show which areas will be affected by the plug-in. 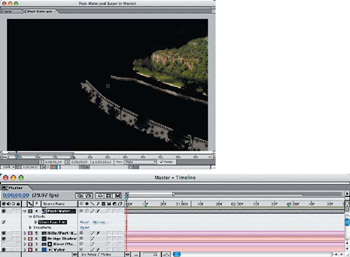 Figure 14.6: The static image layer of this composite has both detailed and wide area coverage.

With the Comp window magnified to 200%, you can see the amount of film grain that is being applied to the layer. The default film Grain size is 0.8, but that was too heavy for this composite, so I adjusted it down to 0.5 in all three RGB color channels (Figure 14.7). I left the rest of the plug-in effect at the default.

Figure 14.7: Adjust the Grain down to 0.5 in all three RGB color channels.

The final composite is well blended and no static elements appear to stand out (Figure 14.8). You can view the QuickTime movie, Water_Matte.mov, in the Chapter 9 folder on the DVD. 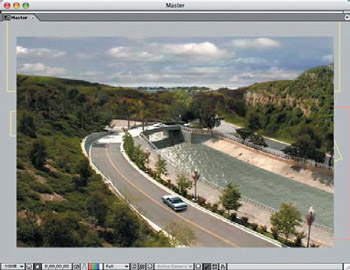 Figure 14.8: Apply the film grain effect to the static layer to make it blend in well with the original footage.

Similar to the noise loop created earlier in this chapter, TV noise is random, only in negative. A blank black-and-white TV screen is black, so the noise, or "snow," created on the picture tube is the absence of information in a signal. This is why a strong TV signal is clear and the contrast is sharp, but a weak signal has this noise over the broadcast picture. Of course, the absence of any broadcast signal at all generates just noise. 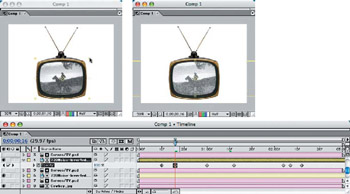 Figure 14.12: Duplicate the inverted noise layer positioned over a scene layer on the TV, and vary the Opacity to simulate a weak signal.

Moving or distorting Photoshop layers in After Effects can produce realistic clouds and fog. By using the Clouds filter in Photoshop, you can create random cloud layers that can be used to float over one another to create 3-D effects—or you can Liquify layers to produce swirls in motion. These clouds can be composited into the background of a scene or screened lightly into the foreground to create fog effects.

You can adjust the length of time or the distance each layer moves to control the speed of the cloud animation. This cloud animation can now be used as a background or screened over another scene.

In addition to moving a layer's position across the frame, you can further distort it to create motion and flow, using the Liquify option. You can also control the amount of distortion over time in the Timeline, which gives you the effect in motion.

Start by duplicating just one layer of the clouds project, and hide the original three layers. Move the Indicator to the first frame on the Timeline and open the Liquify palette (Effect > Distort > Liquify). Apply only a small amount of one of the Liquify distortion tools to a section of a cloud to set the keyframe. Set the Stopwatch in the Effects option on the Timeline to set the first keyframe. Then move the Indicator to the last frame, and apply various distortions to the clouds in the frame, such as Grow, Shrink, Move, or Twirl (Figure 14.16). You can go back along the Timeline and make other distortions if you like, and it will automatically tween. Play a RAM Preview or render out your animation to see the moving cloud effect that was so easy to make! 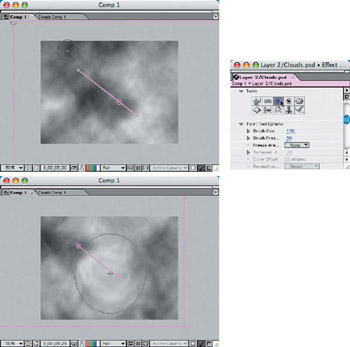 Figure 14.16: Use the Liquify tools to distort the clouds over time.

Adding Mist or Fog to Your Footage

The multiple cloud layer method works well for adding a misty marine layer or moving fog bank into your scene. But to make the effect subtler, you need to lower the layer Opacity and use some of the background footage base colors in making your clouds.

In this example, I opened the footage in QuickTime Pro to which I was going to add the mist and fog. I then created a new Photoshop file and changed the foreground color using the Eyedropper Color Picker to match the green water in the visible Quick Time movie (Figure 14.17). I then applied the Clouds filter and repeated the process on another layer. 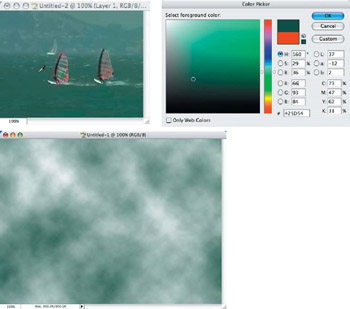 Figure 14.17: Sample the original footage base color to use as the foreground color for your cloud layers.

I then imported the original footage and the Photoshop cloud layer files into an After Effects project. I created a mask for each cloud layer, resized the mask, and applied a 150-pixel feather (Figure 14.18). This allowed the bottom edge of the clouds to be soft while the clouds still went past the edges of the frame. 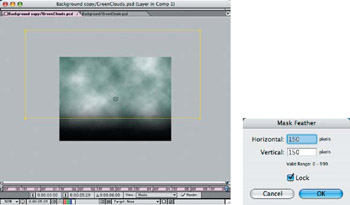 Figure 14.18: Add a feathered oversize mask to the cloud layers to create a soft bottom gradation.

Since my original footage was 320240 and my cloud layers were 720480, I had to resize them to better fit the scale of the footage layer. I made them two different sizes so they could move independently and still follow the direction the camera moves in the footage layer (Figure 14.19). I scaled them much shorter vertically and the top layer much longer horizontally to match the movement of the camera. I adjusted both layers in Opacity as well, setting the top layer to 50% since it will be the fog layer that moves along with the camera. I set the lower layer to 35% to create a mist effect. 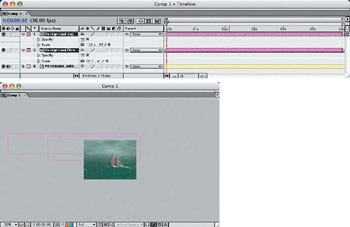 Figure 14.19: By stretching out the cloud layers, you can move them to follow the camera motion in the video clip.

I set the two cloud layers off to the left of the frame in the beginning of the clip and then set the position to the extreme right at the end of the clip (Figure 14.20). Because the lower cloud layer is shorter in horizontal scale, it moves less and makes the effect appear more 3-D. 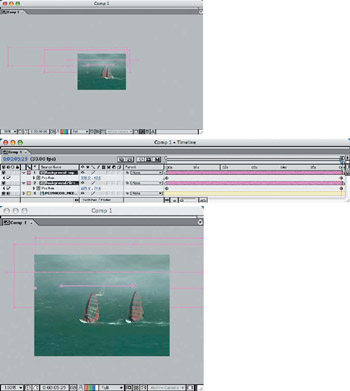 Figure 14.20: Move the cloud layers’ position to the opposite side of the frame to create the motion.

By combining several techniques in this chapter with video alpha channels, you can add realistic smoke effects to stock footage. This effect uses only one Photoshop cloud layer and two stock video clips of fire with a mask copy. You can follow along with these steps or simply open the After Effects file, BarnBurnerProject.aep, to use for reference.

Create a new After Effects project with a composition, NTSC 640480, and import the QuickTime video files RedBarn-Corn-ShortClip.mov (the background footage), RF108.mov (the fire clip), and RF108M.mov (the fire mask clip). Position all three files on the Timeline. Then select both the fire and fire mask clips, scale them down to 19.4%, and move them onto the right corner of the barn (Figure 14.21). Make sure that you keep both layers selected as you scale and reposition them. 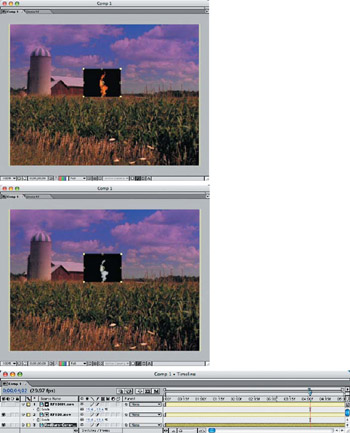 Figure 14.21: Scale and reposition the two fire clips exactly the same over the corner of the barn.

Hide the fire mask layer and select the fire layer. Then apply a Track Matte (Layer > Track Matte > Luma Matte) to reveal just the fire without the black background around it (Figure 14.22). Run a RAM Preview to verify that the two layers match exactly. 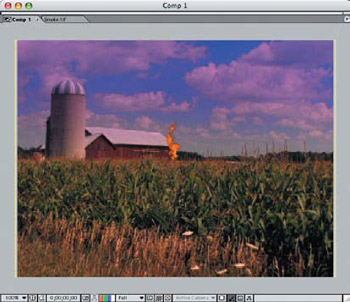 Figure 14.22: Apply a Track Matte, Luma Matte to the fire layer to reveal only the fire. 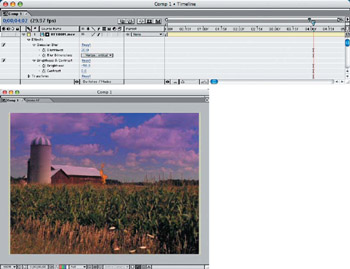 Figure 14.23: Apply a Gaussian Blur and adjust the Brightness of the fire mask layer to soften the flames' edges and match the resolution of the barn footage.

Duplicate the fire mask layer and move it below the fire layer. Change the layer Blend Mode to Silhouette Luma. This is going to become the first smoke layer and it needs to move slower than the flames, so stretch the movie length out 300% (Layer > Time Stretch). Use Transform to stretch the layer vertically to 43.3%, leaving the horizontal dimension the same and move it off to the left in the Timeline to take it out of synch with the flame layer, so it doesn't appear to be a duplicate (Figure 14.24). Increase the Gaussian Blur to 50.0 pixels and remove the Brightness & Contrast effect from this layer. Adjust the Opacity to 20% and play back the RAM Preview to see the effect. 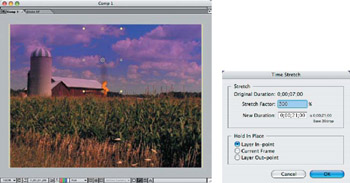 Import the file Smoke.tif into the project file. This is a single-layer Photoshop cloud file that has been blurred slightly. Apply a feathered mask to the layer, and adjust the Bezier handles to create a tall, narrow shape around the brighter section of the image (Figure 14.25). Set the layer Blend Mode to Lighten and the layer Opacity to 20%. 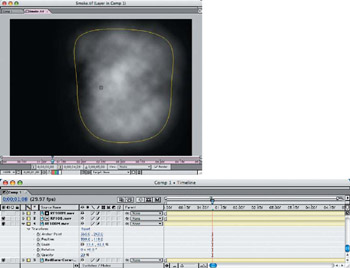 Figure 14.25: Position the smoke cloud behind the first smoke layer and move it subtly against the background (Continues) 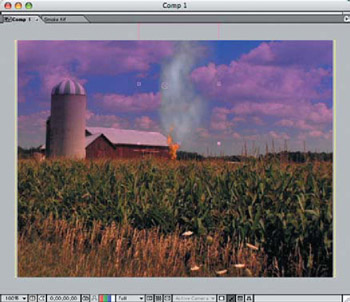 To make the smoke cloud gently rise, click the layer Position Stopwatch at Frame 1 on the Timeline; then go to the last frame and drag the layer up slightly to set the keyframe. Now, to animate the smoke, return to the first frame and apply Liquify with a small amount of the Twirl tool. Go to the last frame again and use larger Twirl and Shift Pixels tool brushes to create upward swirls of the smoke (Figure 14.26). Run a RAM Preview to test the animation of the smoke cloud and adjust the Liquify effects as necessary. 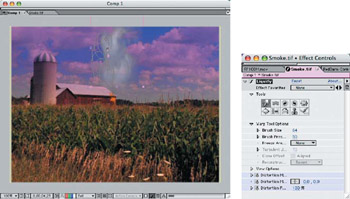 Figure 14.26: Use the Liquify effects to swirl the smoke cloud upward.