To create a physical database schema from your model, you can either create a DDL (data definition language) script, or connect directly to a database server via an ODBC driver. The fundamental issues with both methods are the same, although there are additional considerations when using an ODBC connection. This chapter will first explain how to create a DDL script using basic driver settings, and then describe driver setup options, and finally explain how to use ODBC connections.

DDL for different database platforms generally looks quite similar. All platforms provide syntax for creating tables and constraints, and some allow for stored and procedures and triggers. However, the differences in DDL syntax by platform are pronounced enough that DDL written for one database product will generally not run unmodified on another platform. Thus, VEA must be able to translate models into platform specific DDL.

If you build the database model diagram directly or use an ER source diagram, refer to Table 11-1 for a list of the entities, attributes and keys that you should include in your model. In this table, the primary key of each entity is double underlined, unique attributes are single underlined , and mandatory non-key attributes are shown in boldface. Also, make sure to add a relationship from the Patient entity (child) to the Country entity (parent), and make the Country_code attribute optional in the Patient entity.

An ORM source model with the correct facts and constraints will automatically generate a database model diagram like the one in Figure 11-1. If you choose to create an ORM model, the first part of section 16.1 in this book lists the facts and constraints that you would need to include in the ORM source model. Regardless of how you created the database model diagram, save it to a file called Patient_ch11.vsd.

To generate a DDL script: 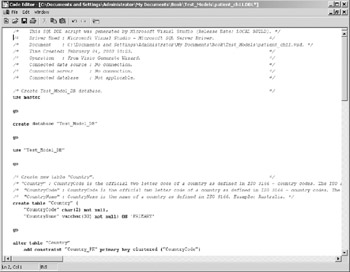 The preceding example showed how to create a DDL script, but ignored database driver options. The options fall into two categories, driver specific options, and options that apply to all drivers.

Discussion of the Setup button on the Database Drivers window was deferred in step one of the DDL script generation example (Figure 11-2). Re-Invoke the Database Drivers window by choosing Database > Options > Drivers from the main menu. Your screen should once again look like Figure 11-2. Click the Setup button to invoke the VEA driver setup dialog box. The first tab is labeled ODBC Drivers , and the second is labeled Preferred Settings . The ODBC Drivers pane is discussed in section 11.5. For now, click the Preferred Settings tab to make your screen look like Figure 11-13. 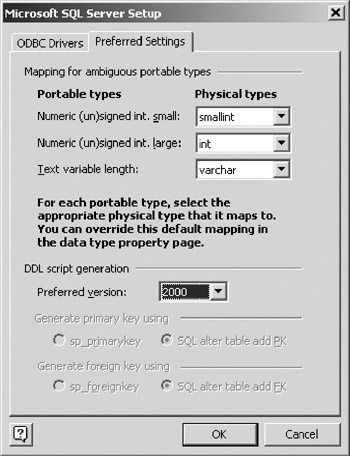 The choices available on the Preferred Settings pane are specific to the driver being configured, in this case MS SQL Server. The top portion of the pane is devoted to resolving data type mapping ambiguity. Portable data types are mapped to a single physical data type for each supported database product. MS SQL Server has three physical data types that deal with integers: tinyint, smallint, and int. Each portable data type must map to just one physical type, which can be specified on this pane.

In the list box on the bottom of the Preferred Settings pane, choose the version of MS SQL Server for generating DDL or making an ODBC connection. In versions subsequent to 6.0, primary and foreign keys are generated with SQL statements, which is why the radio buttons at the bottom of the pane are disabled. In version 6.0, primary and foreign keys can optionally be defined by stored procedures instead of SQL statements.

If you have set MS SQL server as your default driver, you will not see the Oracle Server Setup dialog box (Figure 11-14), but it is shown here for informational purposes. 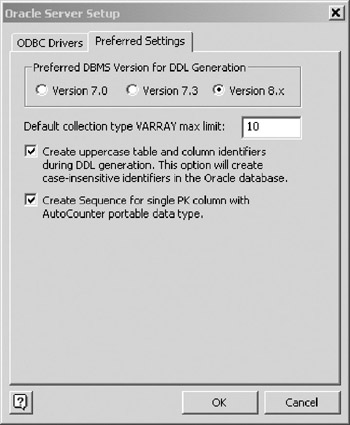 The radio buttons along the top of the pane specify which version of Oracle to use when generating DDL or making an ODBC connection. The text box in the middle of the pane is for specifying the default array size for the Oracle VARRAY collection type, an object relational data type.

The final checkbox causes VEA to create an Oracle sequence for any single column primary key that is an Auto Counter portable data type. In addition to the sequence object, VEA will write an INSERT trigger for the column to automatically populate the primary key with the next value in the sequence.

Use this feature carefully . The sequence that is created will always be called

Once you have filled out the Preferred Settings for your driver, click the OK button to be returned to the Database Drivers window (see Figure 11-2).

Options that Apply to All Drivers

The options discussed in this section apply to all database drivers. Click on the Default Mapping tab to open the next configuration pane, as shown in Figure 11-15. 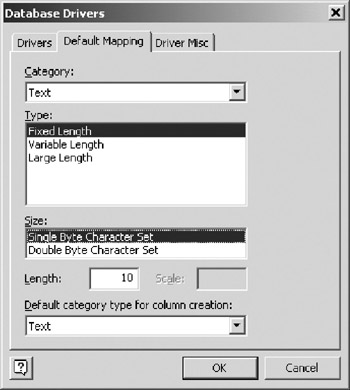 In this pane you can make minor customizations to your database driver.

The Size text box allows you to specify the default character set for portable data types that belong to the Text category. For portable that data types that belong to the Numeric category, use the Size box to indicate magnitude (e.g., "small" or "large"). In the Length text box, you set the default data length that should be used for the chosen Category / Type combination.

The final list box in Figure 11-15 is labeled Default category type for column creation . This list box tells VEA what portable data type to assign to ORM objects and logical columns for which data types have not been specifically declared.

Click on the Driver Misc tab to invoke the next configuration pane, shown in Figure 11-16. This pane is confusing, because it appears that all the options it are applicable to all drivers, when in fact one of the options is driver specific. 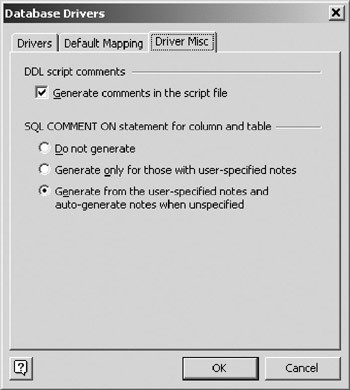 The first checkbox on the Driver Misc pane controls whether VEA will put comments about each database object into the generated DDL script file. These comments can be derived from user entered notes only, or they can include notes that VEA automatically generates during database project builds. The comments inserted into the script will not execute, because they will be marked as comments /* like this * /. If you want "bare bones" DDL, deselect this box.

Choose among the three radio buttons in the middle of the pane to control VEA's generation of SQL COMMENT ON statements, which actually store comments in the server data dictionary. Generating SQL statements to store comments in the database server dictionary is not the same as simply generating comments into the DDL script. Not all database engines support the COMMENT ON feature. In the generated script, VEA will truncate any comments that exceed the server's maximum comment length.

Generating Schemas Via an ODBC Connection

You must define a DSN that uses the appropriate ODBC driver and points to the proper physical database instance. DSNs are defined through the ODBC Data Source Administrator , which is an administrative tool of the Windows operating system.

Connecting to an Existing Database Using the Generate Wizard

As shown in Figure 11-17, models ard translated by VEA database drivers, which connect to databases via a DSN. Each DSN is associated with an ODBC driver. For database generation to function properly, the ODBC driver of a DSN must be designed for the same target database engine as the selected VEA driver.

Ideally, the list of available DSNs in Figure 11-31 should be limited based upon the ODBC driver associated with each DSN. For instance, if you are using the VEA MS SQL Server database driver, then the list in Figure 11-31 should only include DSNs that use the SQL server ODBC driver. Similarly, if they are using the VEA Oracle Server driver, the list of DSNs should only include those DSNs that use the Oracle ODBC drive .

By default all DSNs are included in the list of available data sources, regardless of the associated ODBC driver. To change this default behavior: