Imagine that you are the CEO of a corporation with thousands of employees. Your executive team has decided that you need to invest in Lean Six Sigma if you want to become competitive. You want to launch a number of improvement projects so you can make a difference in the company’s profits as quickly as possible. Unfortunately, only a few people in your company have any experience with Lean Six Sigma projects.

That means you have two big challenges: (1) picking projects you’re sure will contribute to your corporate goals, and
(2) training a large number of people so they can become effective team members. If you don’t do these things, you’ll never be sure that all the time your staff is about to put into the projects will be worthwhile.

How would you attack these challenges? In most companies, the solution combines:

Let’s start by looking at what happens to staffing, then see what kind of training and procedures help support those staff.

The companies that invented Six Sigma back in the late 1980s developed special names for each of the new roles based on the practice in Karate of having different colored belts that indicate different levels of mastery. 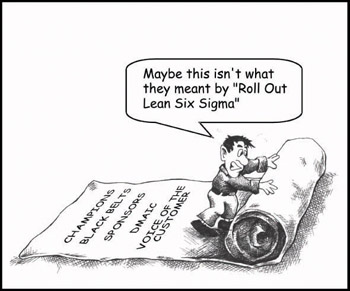 The combination of these specialized “Belt” positions, as they are called, plus other staff involved in Lean Six Sigma is often called the Lean Six Sigma “infrastructure.” Here again, each organization will have its own infrastructure, but let’s look at seven typical roles and how they relate to Lean Six Sigma:

Just like the Lean Six Sigma efforts themselves, training programs differ greatly from organization to organization. Typical levels of training include:

A well-rounded Black Belt training program is usually built around 4 to 6 weeks of classroom training, which includes one week of Leadership training. Typically, Black Belts attend a week of training, return to project work for a few weeks, come back for the second week of training, and so on.

If you look at all the organizations that have adopted Six Sigma or any of its predecessors—such as Total Quality Management— you’ll find a fair number that have invested a lot of time and money with very poor results. If you look closely at these companies, you’ll see problems such as…

These problems are so common that Lean Six Sigma incorporates ways to avoid them. Above all, Lean Six Sigma encourages the mentality that improvement is something that should be done to support business goals, not something done instead of the “real work.” In addition, there are two particular methods that are useful here:

If someone were to ask you what needs to be fixed or improved in your work area, odds are you could come up with a dozen different answers. Now multiply that by the number of people working for your department. And multiply that result by the number of different departments in your company—and you’ll have an inkling of the kind of challenges that management faces in selecting projects. The problem isn’t coming up with ideas. It’s picking the best ideas from among the many possibilities. “Best” means projects that will have the biggest payoff (what your CEO would call “increasing shareholder value”), and that can be completed quickly with the resources available.

To solve this problem, Lean Six Sigma prescribes a process like that shown in Figure 7.1. The procedure starts with broad goals for the company as a whole (what executives may call “burning platforms”). Typical burning platforms include issues like “reach new customers,” “reduce overhead costs,” “speed up how quickly we get to market,” and so on.

Figure 7.1: From Strategy to Execution

Those goals are translated down to business units, and then to specific processes (or “value streams”) that will be targeted. Then the Champion and Black Belts will work with managers to identify specific projects to address the problems identified in the value stream.

The key to this sequence is maintaining the links at each step: making sure that business unit goals relate to corporate goals, and that project goals relate to the business unit goals. That way, projects will always be linked to corporate priorities. And that means managers are more likely to support them. It also means that Lean Six Sigma is more likely to be viewed as something to help managers and employees, rather than something that is stealing valuable resources away from the “real work.”

A tollgate system for project review

In the past, teams were given their marching orders with little or no monitoring until the project was completed. Lean Six Sigma changes that. As you’ll learn in the next chapter, most projects go through a standard sequence of activities known as Define- Measure-Analyze-Implement-Control or DMAIC (see the next chapter for details on DMAIC). In a Lean Six Sigma organization, managers review the project between each DMAIC phase, performing what is called a tollgate review. The purpose of these reviews is to…

Using this system helps make sure that the company’s resources are used wisely, and that teams get the support they need to complete their projects on time and within budget.

Launching Lean Six Sigma in a company involves a lot of different activities. Someone has to develop the needed training. Management needs to select the people to go through the training and the projects those people should work on. The timing and sequence of these activities varies from company to company. A typical process is shown in Figure 7.2 (next page). What’s important in this picture is that…

The timing of the waves varies a lot. Caterpillar, for instance, decided that it needed to have all its staff up to speed on Lean and Six Sigma methods very quickly. They trained 750 Black Belts in six months. Bank One, on the other hand, went through a year-long demonstration period of what it called “Focus 2.0” (their version of Lean Six Sigma). During this period, internal experts coached a limited number of teams on major projects. (There was no formal training except for on-the-spot coaching given by the experts.) The success of these projects created a lot of internal awareness of just what Lean and Six Sigma could do for the business, to the point where business units are now asking for training.

To have any chance of success, implementation of Lean Six Sigma must be accompanied by new positions, new training, and new ways for different layers of the organization to communicate. This new “infrastructure” helps companies translate their investment in Lean Six Sigma into measurable results to the organization and its customers.