The first step to understanding film is simply knowing the basic format it comes in. Thomas Edison created 35 mm film in 1889, and it remained the standard for decades. In response to the growing popularity of television in the 1950s, Hollywood conjured up a number of different widescreen formats through experiments with anamorphic lenses and film stocks as wide as 70 mm. These systemsCinemaScope, VistaVision, Panavision, and so onhaven't completely faded away, but their presence in the modern era is mostly felt in the way that films are displayed, not how they are shot. 35 mm is once again the most popular shooting format, specifically the full-aperture version known as Super 35 mm.

Standard 35 mm film has an aspect ratio of 4:3, which is not coincidentally the same as a television. Almost all current movies are filmed in this format as if originally intended for the small screen. When shown in a theater using a widescreen aspect of 1.85:1 (also known as 16:9, the HDTV standard) or 2.35:1 (CinemaScope/Panavision), the full 4:3 negative is cropped (Figure 11.1). Theater patrons actually pay $10 to see less than if they waited for the movie to get broadcast full screen on cable! You may be surprised that movies are shot with TV in mind, until you consider that home video sales have surpassed theater revenues recently. But rest assured, directors still compose their films with the theatrical aspect ratio in mind. As television transitions to HDTV, meanwhile, the 16:9 format becomes more and more common.

Figure 11.1. Super 35 mm film format is always 4:3 at full aperture; the typical ratios at which Super 35 is projected are crops of the full aperture, still occupying four perforations of the negative. 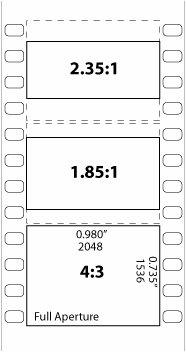 After a movie has been filmed, the negative is developed, and then shots destined for digital effects work are scanned frame by frame, usually at a rate of about 1 frame per second. During scanning, the Telecine process (pronounced Tell-eh-sin-ee), some initial color decisions are made before the frames are output as a numbered sequence of Cineon files, named after Kodak's now-defunct film compositing system. Both Cineon files and the related format, DPX, store pixels uncompressed at 10 bits per channel. Scanners are usually capable of scanning 4 K plates, although most elect to scan at half resolution, creating 2 K frames around 2048 by 1536 pixels and weighing in at almost 13 MB. Cineon files used to be transported to visual effects companies using computer tape formats, but now portable FireWire hard drives are the method of choice.

Because the process of shooting and scanning film is pretty expensive, almost all Cineon files ever created are the property of some Hollywood studio and unavailable to the general public. The only known free Cineon file is Kodak's original test image, affectionately referred to as Marcie (Figure 11.2) and available from Kodak's Web site (www.kodak.com/US/en/motion/-support/dlad/) or the book's disc. To get a feel for working with film, drop the file called dlad_2048X1556.cin into After Effects, which imports Cineon files just fine.

Figure 11.2. For a sample of working with film source, use this image, found on the book's disc. 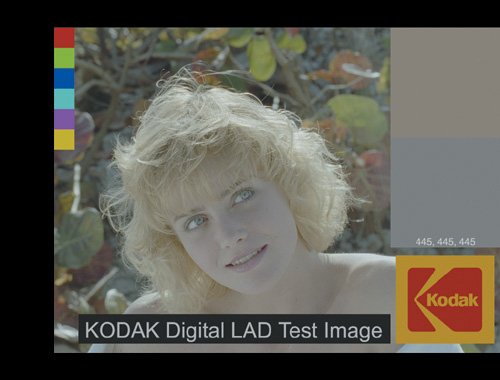 The first thing you'll notice about Marcie is that she looks funny, and not just because this photo dates back to the '80s. Cineon files are encoded in something called log color space, which is explained shortly. To make Marcie look more natural, apply After Effects' Cineon Converter, found under Channels in the Effects menu. The Cineon Converter follows equations described by Kodak for converting log space images to the video space of your monitor.

After Effects 7.0 includes a whole new Color Profile workflow, which potentially supersedes the use of Cineon Converter when a color Working Space is active. Usage is further described later in the chapter.

In working with film, the goal is to add whatever magic on top of the original image and then return it to the studio. Because the Cineon Converter can also convert video images back to log space, it would seem natural to convert everything to your monitor's color space, work as you always have, and then convert the end result back to log. But upon further examination of what happens in After Effects when you convert from log to linear (as After Effects calls it) and then back to log, you see a problem: With an 8 bpc (or even 16 bpc) project, the bright details in Marcie's hair don't survive the trip (Figures 11.3a, b, and c).

The obvious alternative is to leave Marcie unconverted in log space, and use the Cineon Converter for preview only. Although this is a workable plan, there are many pitfalls with this method because none of the tools in After Effects were designed with log images in mind.

As will become evident later in the chapter, the choice of "linear" to describe the alternative to "log" space for Cineon Converter is unfortunate, because "linear" now has a specific meaning that is not appropriate in this case; what Cineon Converter calls "linear" is in fact gamma encoded.

What's going on with this mystical Cineon file and its log color space that makes it so hard to deal with? And more importantly, why? Well, it turns out that the engineers at Kodak know a thing or two about film and have made no decisions lightly. But to properly answer the question, it's necessary to discuss some basic principles of photography and light.