Add a backlight to this tiny wireless communicator, so you can use it in the dark.

The Zipit Wireless Communicator (http://www.zipitwireless.com) isan amazingly cool, cheap wireless handheld device that has just one purpose: 802.11b communications. It's marketed primarily to teens as an instant messaging device, but guess what? It also runs Linux on an ARM chip and uses an Orinoco radio card. It has a tiny 16MB of RAM and a scant 2MB of flash memory, making it difficult (but not impossible) to run applications on it. There are a number of ways to get Linux running on the Zipit [Hack #73].

There's one thing the Zipit does not include: a backlight. It's really a shame that manufacturers continue to ship devices without a backlight; it's often the kiss of death for products that otherwise might develop a following.

To add a backlight, you're going to need an electro-luminiscent (EL) panel. I found a suitable piece of EL panel for this hack at Miller Engineering (http://www.microstru.com). Secondly, you'll need a driver chip to make the EL panel work. I found a chip already mounted to a tiny board from Jelu (http://www.jelu.se/shop/product_info.php?cPath=1_29&products_id=33).

Here's a step-by-step account of how I added the backlight. No, I won't buy you a new Zipit if you break yours while attempting this.

Flip the little guy over. Unscrew the battery cover and yank the battery. Pry up the tiny rubber feet to reveal four Phillips-head screws, as shown in Figure 4-20. 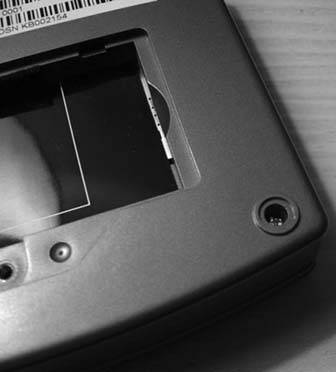 Remove them. The entire bottom should come off easily. On my unit, the sticker covering the battery area was stuck to the CPU, so you might have to gently pry that up with a screwdriver. Be careful as you pull the bottom off, because the speaker is attached to a recess in the bottom with gummy glue. Pry up the speaker and completely remove the bottom shell.

Be careful not to lose the power button cover. Take it off and put it where you put the case screws (and don't lose those either).

You'll need a soldering iron for this step. First, apply heat to the antenna connector cable and remove it from the board. Next, lift the white part of the plastic LCD panel connector (it should swing away from the board) and gently remove the brown ribbon cable.

Put the mainboard and keyboard membrane aside. You can remove the rubber keyboard too if you like.

Open the Zipit lid, and remove the teeny rubber discs on the inside of the hinge. Remove the exposed Phillips-head screws.

Leave the Zipit open and flip it back over, as shown in Figure 4-21. 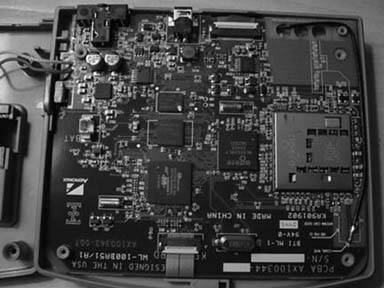 Near the brown LCD ribbon cable you should see three more Phillips-head screws. Two are connected to the metal pivot hinge. Leave those in place. Remove the third screw, which will release the small cap covering the ribbon cable and antenna feed. There was also a tiny pink plastic clip jammed into this space on my unit, putting pressure on the cables. Remove and discard it. Since we'll be adding a power cable for the backlight here, you won't have enough space for it, and since it just chafes the cables anyway, you won't miss it.

Now, here's the tricky part. Wedge a plastic screwdriver (or your thumbnail) between the two halves of the LCD side of the case and pry them apart.

Don't use a metal screwdriver; if you do, you'll leave nasty marks on the edge of the case. You have to pull pretty hard to unsnap the case, and directional pressure doesn't really help. Just yank the thing and it'll pop open.

Also, be careful when prying this apart not to lose the lid latch and spring. You can probably live without them, but if you want to keep them, now is your chance not to let them fly across the room or fall behind the workbench.

If all went well, you should see the white backing of the LCD panel, as well as more brown ribbon cable and the lid antenna, as shown in Figure 4-22. The white backing is held to the LCD with a sort of thick rubber cement. You need to peel this backing off and replace it with EL panel. The cement will stick to the LCD. 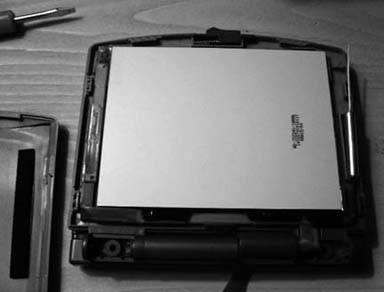 Pick at a corner of the backing with a razor blade (or a fingernail). Try to peel off the backing all in one piece, pulling firmly away from the LCD. Keep in mind that the LCD is made of glass and is very, very fragile. You also don't want to touch the gummy cement with your fingers or any tools, since any marks you make in it will be visible when you install the backlight.

When the backing has been removed, it should look something like Figure 4-23. 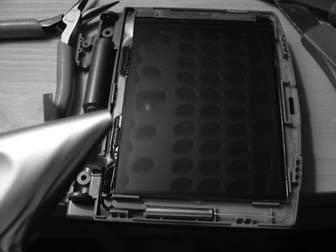 4.10.5. Preparing and Installing the EL Panel

You should now be able to estimate how much EL panel you will need to cover the LCD. Trim yourself a nice piece using a pair of scissors. It should overlap the LCD panel on three sides by a couple of millimeters. On the side nearest the antenna, leave one set of leads and trim off the rest, as shown in Figure 4-24. 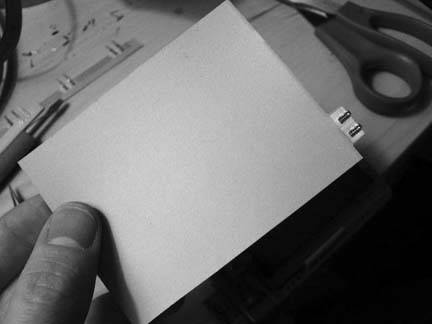 Once you have trimmed the panel, place it gently on the LCD. I installed mine sort of like you install a piece of linoleum floor. You want to avoid air bubbles, so start in the middle and gently press the panel out towards the edges. Try to push any air bubbles all the way to the edge. If you trap a bubble, start over by pulling the panel all the way back off. This is easier than stripping the backing, since the panel is made of plastic. Remember, that's delicate glass you're pushing on, so don't press too hard.

Solder a couple of wires to the leads on the EL panel, similar to Figure 4-25. I used ribbon wire salvaged from an old floppy disk cable. It should be at least eight or nine inches long, preferably stranded, and as thin as you can find (recycled CAT5 cable is way too thick). Remember that plastic will melt if you're not careful with your soldering, so be quick. 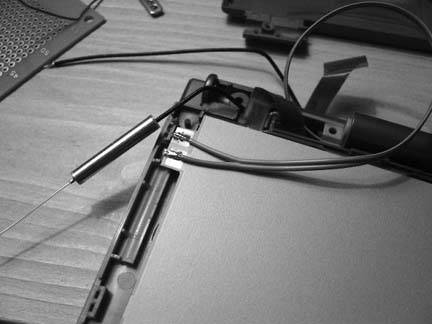 Run this wire the same way the antenna wire is run. Cover the exposed leads on the EL panel with a piece of electrical tape.

Flip the Zipit back over, and put the mainboard back in place. Feed the antenna cable and the two wires through the hole closest to the LCD panel connector.

Now comes the fun part: soldering the leads to the mainboard, as shown in Figure 4-26. Attach one wire each to the plus and minus poles on the battery connector. Solder a third wire to the corner pin on RP4, on the R108 side closest to C116. 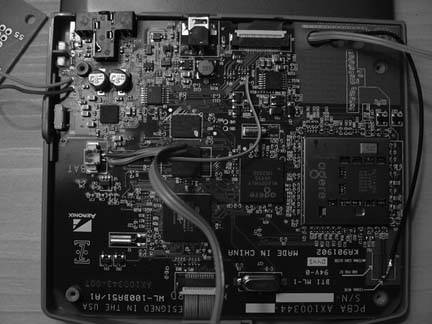 Figure 4-27 shows a detail with the proper pin labeled EN. 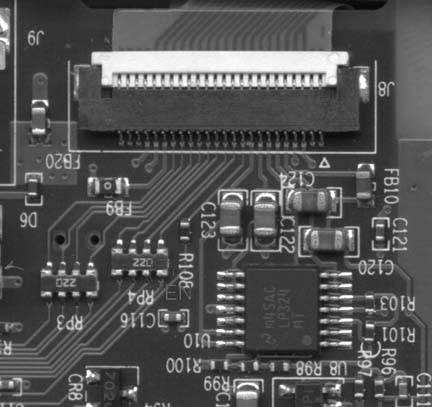 Finally, reattach the antenna lead. When you're done, it should look like the unit shown in Figure 4-26. If your soldering iron isn't fine enough to solder the third wire, don't panic. This pin is pulled high when the LCD panel is active, so once we figure out power management on the board, this wire will turn the backlight on and off when the lid is closed. Of course, we haven't figured out power management as of this writing, so the backlight stays on all the time anyway under Linux. If you're running the Zipit messaging client, the backlight works beautifully and turns off to save battery time.

If you can't get this wire attached without destroying the board, just connect that wire directly to power and the backlight will stay lit all the time. It's not ideal, but it's better than nothing.

Now, solder in the EL panel driver board. The driver board from Jelu is based on the Supertex HV857MG driver (it's pretty much a nice little implementation of the reference design). I've noticed that this chip isn't designed to drive a panel as big as the one for our Zipit, so it ends up being a mellow blue instead of bright white. If you change the chip to an HV826 or HV830, it should be much brighter. I'll likely give that a try at some point. Figure 4-28 shows the finished unclosed case with a close-up of the driver board. 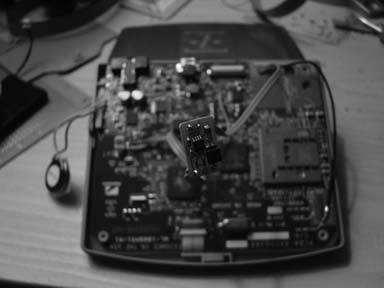 Connect LA and LB to your EL panel (it doesn't matter which is which), and connect GND to minus, VDD to plus, and EN to the remaining wire. At this point, you probably will want to connect the battery and power up the Zipit to be sure that everything works as expected. Don't touch the driver board while it's on, unless you are partial to electric shocks for fun.

Congratulations! You can now use your Zipit in lighting other than direct bright sunlight!

Removal is the reverse of installation.

I'm definitely going to try a different EL driver chip to get the brightness up a bit. But the Jelu model should get you going. These things are really neat; you typically need a big, whiney transformer to drive EL, but these driver chips are small, quiet, and efficient. A tiny driver board combined with a light that you can cut with scissors to any shape should make it easy to add a backlight to just about any transparent LCD display.