Why be stuck with a short cable when you can use Bluetooth in your pistol mouse instead?

The PistolMouse FPS by MonsterGecko (http://www.monstergecko.com/products.html) is a great way to play first-person shooters. However, when you're at a LAN party and you want to wave the thing around after fragging your friends, you are rudely reminded of the short USB cord handing from the front of the unit.

By taking the main board out of a Targus AMB01US Bluetooth Mini Mouse (http://www.targus.com/us/product_details.asp?sku=AMB01US) and replacing it with the main board of the PistolMouse FPS, you can make the MonsterGecko device wireless for use with any Bluetooth equipped system. Figure 4-29 shows the two mice, side by side.

First, get everything together, so you don't have to make three trips to the local electronics store during the assembly process. Here's what you'll need:

Next, if you haven't already, test out both the PistolMouse and the Targus mouse to make sure they both function properly with the system where you plan to use them.

If you have any questions during the project process, check my Flickr photoset at http://www.flickr.com/photos/_bt/sets/494023, which contains 21 pictures of the process (I obviously couldn't include them all in this hack).

Disassemble the MiniMouse by removing the two small mouse feet stickers near the rear of the mouse. This will expose two screws. Remove these. Open the mouse and remove the battery cover. Then, remove the blue frame from the mouse, which is latched toward the front of the mouse with clips, as shown in Figure 4-30.

Figure 4-30. Removing the MiniMouse board from the frame 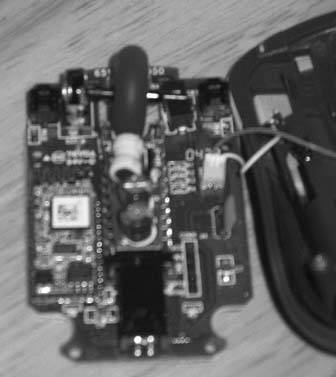 Be careful not to damage the MiniMouse main board during this process. There are two wires going to the main board, red and white, for power; just pull the plug out of the board and set aside. Remove the black housing over the LED on the back of the main board, because this is usually too large to keep in the finished device.

Disassemble the PistolMouse FPS with the Phillips screwdriver on the bottom and using a hex screwdriver on the sides. You will have to remove the red plastic grip (attached just with friction on the left side of the gun) to get to the hex screws. There are a total of 11 hex and 6 Phillips screws to remove from the PistolMouse. Be careful to keep track of any parts if they fly out during this step.

Remove the main board from the PistolMouse FPS and detach any wires and place to the side. You will need this for reference only, if at all. Figure 4-31 shows the MiniMouse board (on the right) and the much simpler Pistol-Mouse board (on the left).

Figure 4-31. Main boards from each mouse 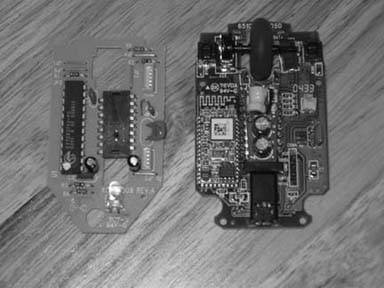 Figure 4-32. The four sensors that need to be removed 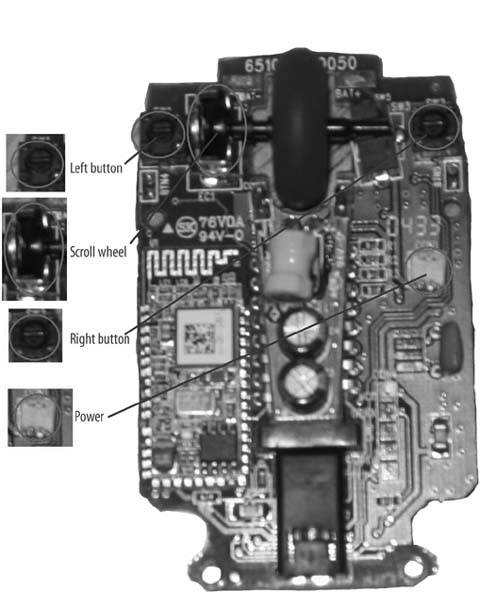 Now you will extend the wires from the original PistolMouse FPS to the MiniMouse main board, as shown in Figure 4-33. Use wire of more than sufficient length at this point; you can cut it short later. Use the heat shrink tubing instead of electrical tape for attractive wiring, as well as helping make it as small as possible.

Orientation for the following instructions is the front of the mouse and the rear of the mouse, as held in your hand.

Figure 4-33. Extending the wires from the PistolMouse 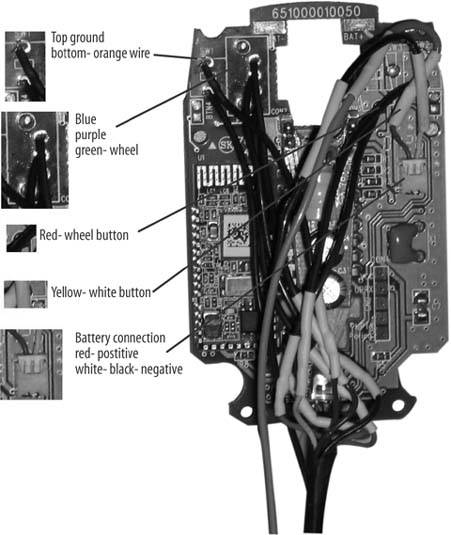 Please double-check the ground connections on your mouse before proceeding using the multimeter and the two connections for each button, in case Targus has changed the MiniMouse main board:

Now, add an extension of wire to the AA battery holder, as shown in Figure 4-34. This will need to go from the top of the gun all the way to the bottom front. Attach the power plug to this extension so that it can plug into the MiniMouse main board. 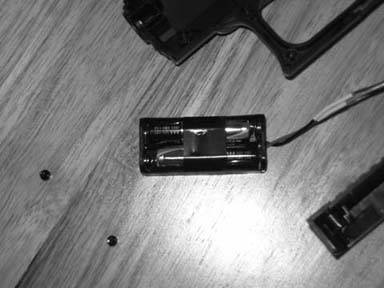 Put AA batteries in the holder and turn on the PistolMouse. As with Mini-Mouse in its original form, you might have to click the buttons a couple times to make sure the unit is on and working. Click or manually press the switches on the PistolMouse and verify that they are working on your system. At this point, you should have a disassembled working unit, like the one shown in Figure 4-35.

One problem I experienced was that I originally plugged the ground into a different point, and this gave a ghost of constant clicking on the left button. After connecting ground to the left button connector, the device worked fine. Test things like ground, to make sure they are all connected and do things like tracing the wires from where they are plugged in, to where they go to the buttons. 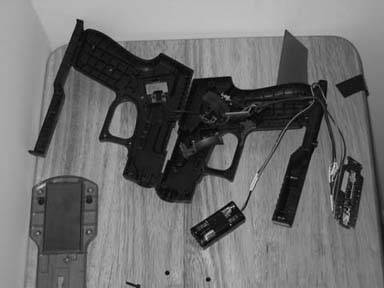 You'll need to make room in the plastic of the PistolMouse FPS for the new larger main board. Use a dremel or similar tool to remove the fins in the black plastic where the board sits. You will also have to remove red clear plastic material from the bottom. In the end, the board should sit gently on the red plastic with the lens optic in place. The optic from the original board and the new one were exactly the same in my experience, so you can use this to assist in positioning the board in place. The extra wires you now have on the board will press it down in actual use. Figure 4-36 shows the bottom of the PistolMouse with the new board and the modifications I made.

You will also have to cut two small holes in the red plastic, as shown in Figure 4-37. One will be for the on/off switch. I did this in order to be able to use the switch from the original mouse, but I still have to use a paper clip to flip the switch. Do this carefully.

For the connect switch, you will have to carefully figure out where it is under the red plastic, then drill a hole so the connect button can be installed. I used a few layers of electrical tape to make the hole walls taller so the button wouldn't come loose. Use incremental sizes of drill bits until the hole allows the button to be pushed and return to its place, but still tight enough that it won't come loose during use.

Figure 4-36. Modifications to the bottom case of the PistolMouse 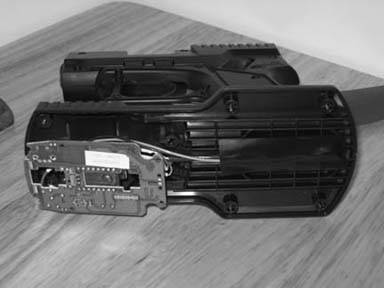 Figure 4-37. Holes for the optics and on/off switch 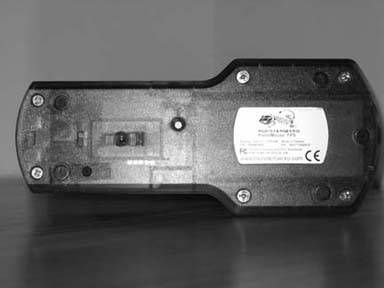 Once everything is working properly, it's time to reassemble the unit. Begin by putting fresh high-quality AA batteries in the holder, because they are not easy to replace. Then, put the holder above the scroll wheel in the cavity above the trigger. Run the wires for all the buttons and batteries down the front of the gun, so they don't interfere with any other buttons or screw holes. Then, screw together the two halves and replace the rubber grip.

Put a piece of tape over the wires as they exit out of the top of the gun into the bottom, and make them run along the center channel on the bottom of the black plastic. Then, align the main board and optic on the red plastic and attach the bottom plate. Screw this on and everything should be together. Turn on the unit and test and debug further if needed. Often, you'll need multiple attempts to run the wires smoothly and reassemble the bottom piece. Figure 4-38 shows the finished reassembled unit. 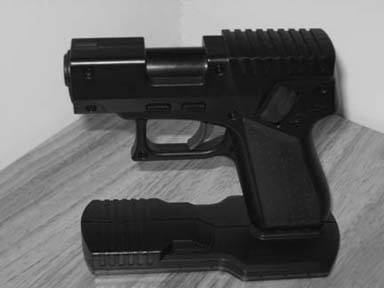 Use the new mouse as you would any Bluetooth device. It should work on both Macs and PCs that have Bluetooth. It should perform similar to the original PistolMouse FPS, since they both are 800dpi devices.