Use these methods to quickly tell if a long-distance wireless shot is possible.

Wireless networks operate at microwave frequencies and, as such, work much better when the client's antenna can see the AP's antenna, with nothing but air between. Over short distances (within a few hundred feet), wireless networks can tolerate a few objects in the way. But as you try to push your signal further, having clean line of sight (LOS) is absolutely critical.

How can you tell if a given point has LOS to another point several miles away? The short answer is that, without actually having a look, you can't. If the far end is more than a couple miles away, it becomes difficult to tell, even with a high-powered telescope. But using the techniques in this hack, you can make an educated guess as to what is at least within the realm of possibility.

When visiting a potential node site, it's a good idea to bring along a GPS unit. It can log not only the latitude and longitude, but also the altitude of the site. After collecting points, you can pull them into your topographical software and plot them. For example, the Topo! package from National Geographic (http://maps.nationalgeographic.com/topo) allows you to easily mark up a topographical map and analyze arbitrary points and routes. Draw routes between any two points to figure out how the land lies between them. This gives you an easy visual reference for a given shot, as shown in the cross section provided by Topo! in Figure 7-6.

Keep in mind that, although the Topo! software includes surveyed geological data, it won't have tree or building information. You can get a general idea of how cluttered an area is, but you won't really know until you try the shot. Using the overhead view in conjunction with the cross section, you can not only weed out the obvious negatives (as shown in Figure 7-7), but also find potential workarounds.

Figure 7-6. A cross-section "lay of the land" between two points

Figure 7-7. A long-distance nightmare with no chance of a decent shot

Using the overhead view to locate key repeater points can be fun. Find out where the good sites are, and try contacting the people at those points. More often than not, people are willing to work with local community groups to provide free access to the site.

A couple software packages from DeLorme (Topo USA and 3-D Topo-Quads, available at http://www.delorme.com) have the ability to create 3D renderings of a topological region, complete with data markers and labels, as shown in Figure 7-8. While it's a cool feature and is rather compelling in presentations, it has limited practical value beyond helping to visualize the surrounding terrain.

Generally speaking, the more data points you collect, the more impressive your visual presentation will be.

Once your points are plotted on a map, you can very quickly determine which sites are worth developing. If you can't get direct line of sight to a place you'd like, take a look at the surrounding geography and see whether you can find another way. If you can't go through, you'll have to go over or around. Software topo maps can make finding the bank shots much easier.

Figure 7-8. A 3D rendering of any topo region, complete with data points 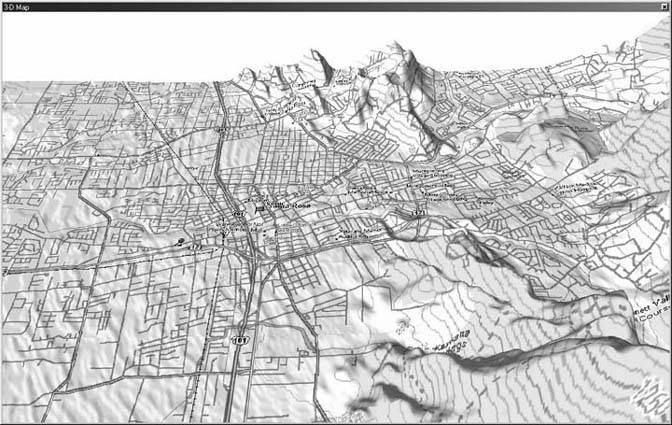 Remember that these tools will show you the lay of the land but don't provide data on ground clutter, such as trees and buildings. The tools aren't perfect, but they can give you an idea of what you have to work with when building a large wireless network.