Use one of these popular embedded PC boxes as a building block for your access point project.

There is a huge variety of PC-compatible hardware available that is perfectly capable of serving as an access point. If budget is a concern, you can certainly pull out that old PC that is collecting dust in the closet, provided that it is roughly of 486/50 vintage or so. 386 machines, while nostalgic, are too painfully slow to deal with by today's standards. Some people choose to use a full-blown tower case with an old 486 or Pentium processor as a combination access point and file server.

If you are planning on building out a large network project, it is advisable to standardize your hardware platform. This is a good idea from an aesthetic point of view, as well as for reliability and ease of troubleshooting. While your dusty old 486 might be just taking up space, brand new embedded machines are coming down in price. These are tiny, fanless machines that are designed to run on DC power and boot from cheap compact flash RAM. This means no moving parts, simple ventilation requirements, and potentially very long uptimes.

Not all embedded solutions are necessarily cost effective. One notorious example is the PC/104 hardware used in industrial embedded applications. Although it offers relatively low performance, this hardware has a reputation for robustness and ease of programming, as well as the standard PC/ 104 stackable bus. But even its extreme popularity in the industrial world hasn't done much to bring down its price, relative to what is available in the general-purpose computing world.

Whatever hardware platform you choose, be sure that it meets your needs. When choosing a piece of hardware, you should remember to consider the number and type of radio and network interfaces, cooling and power requirements, size, RAM and CPU available, and of course, cost. Here are a number of solutions that DIY networks have found to bring a high performance-to-price ratio:

This might be the ultimate hackable embedded system. Linksys has released this wireless router in a number of flavors including the WAP54G access point, and the GS series with more onboard RAM and faster processors. Inside is a Broadcom CPU and radio, and out of the box it runs a custom 2.4 Linux kernel. You can pick up new WRT54G units online for around $50. There are also models from Asus, Buffalo, and Netgear with nearly identical internals. You can do a lot of hacking with the WRT54G, including running custom Linux images [Hack #67] and setting up mesh networking [Hack #68].

Figure 4-1 shows a WRT54G Version 1.0 that has been taken apart. The operating system was corrupted while being hacked, and the box would not boot. A serial port has been soldered on to get a console and interrupt the boot process.

Affectionately known as the "little green box," Soekris boards (shown in Figure 4-2) are a popular choice among do-it-yourself networkers. They are manufactured by Soekris Engineering in Santa Cruz, California. There are a number of Soekris models that work well as access points, with and without PCMCIA. All Soekris boards will boot from Compact Flash or the network via PXE. Most come standard with multiple Ethernet interfaces, a mini-PCI slot, hardware watchdog, serial console, and various processor speeds. They are all fanless boards and use a DC power supply. 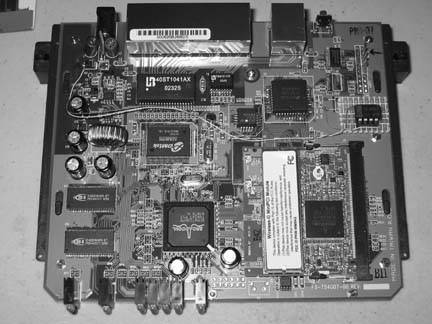 One popular model is the tiny Soekris net4826. It provides one Ethernet port, two mini-PCI slots, USB, a 266 MHz Geode processor, 128 MB RAM, 64MB of integrated flash memory, and can be powered via Power over Ethernet. Most Soekris motherboards sell for $150 to $200. Unfortunately, although the green metal Soekris case might be unique, it isn't watertight. If you are looking for a weatherproof Soekris kit complete with radio cards, mounting and pigtails, take a look at Metrix Communication (http://metrix.net). Metrix kits can accommodate up to two radio cards and pigtails, and come pre-installed with an updated version of Pebble Linux [Hack #70]. Metrix also offers discounts for community networking projects.

Two other embedded boards that are currently popular are the WRAP by PC Engines and the Mikrotik RouterBOARD series. Like the Soekris embedded boards, these are general purpose motherboards that use very little power and can run a variety of operating systems. The WRAP.2C sports a 266MHz AMD processor, Ethernet, Compact Flash slot, and two Mini-PCI slots. The RouterBOARD 200 series is similar, and also includes PCMCIA support. Mikrotik also makes a commercial operating system that requires various licenses depending on functionality, but their boards will happily run Linux or BSD. WRAP boards cost around $175, while the RouterBOARD 200 series runs anywhere from $300 to $500. Mikrotik seems to be moving away from the DIY approach, and now offers a full line of rather expensive networking solutions. 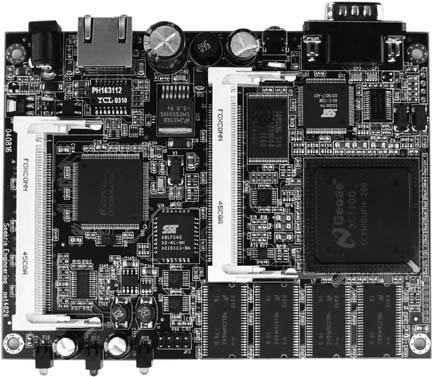 PC Engines has its headquarters in Switzerland, while MikroTik is located in Latvia. Where they are available, these boards work quite well as wireless routers.

There are a number of Via-based computers on the market. They are generally marked as desktop PCs, although small, fanless cases that take a DC power supply are becoming commonplace. As they are intended to be used as general purpose PCs, they typically have 500 MHz or better Via processors, on-board NICs, an IDE interface, USB, and a PCI slot. Even better is the MII series of motherboards, which include a CompactFlash reader as well as a Cardbus/PC card slot.

If you are looking for a fanless solution, be sure to get the 600 MHz version, because the 800 MHz and faster Via boards require a processor fan. A Via MII-6000E fanless motherboard (shown in Figure 4-3) without case, RAM, or storage, costs around $170 at the time of this writing. 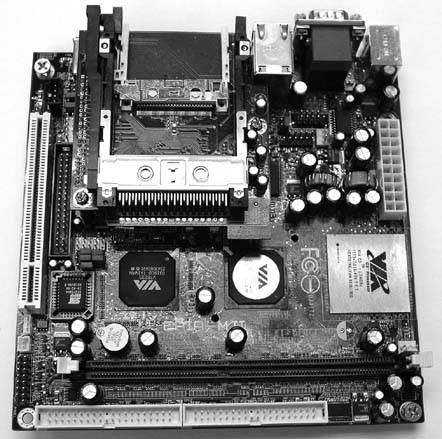 This collection simply wouldn't be complete without mentioning the Fujitsu Stylistic 1000 series, shown in Figure 4-4. This is a popular surplus market tablet PC that has "hack me" written all over it. It has three PCMCIA slots, one of which is the boot device. It can boot from Compact Flash using a CF to PCMCIA adapter, and is unique in that it has an integrated LCD display and battery. The 1000 series has a 486 DX4/100 processor, is expandable to 40 MB RAM, can use a cordless pen for input, and has served just fine as a hardware gateway (I use one myself for my node on SeattleWireless). Fujitsu still makes the Stylistic series, although new machines are quite expensive (on par with modern laptops). The older 1000s or 1200s can frequently be found on the surplus market for less than $100. 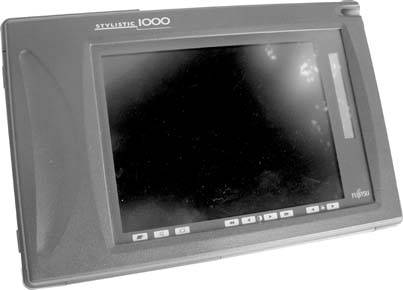 Running your own custom access point can be considerably more challenging than the plug-and-play devices you can buy in consumer electronic stores, but building such devices can be much more rewarding as well. Bringing the power and flexibility of Linux or BSD to the access point itself can lead to all sorts of interesting possibilities that just can't be accomplished with most over-the-counter access points. For details on how to get your own Linux-powered access point set up, see "Build Your Own Access Point with Linux" [Hack #63].