Use a Mac OS X machine with an AirPort card as a true access point.

Mac OS9 had a handy AirPort feature called Software Base Station. It allowed any Mac with an AirPort card and an Ethernet (or dialup) connection to act like a hardware access point, sharing its Internet connection over the wireless. The early versions of Mac OS X were noticeably lacking this handy feature, but it has been restored in Versions 10.2 and later.

To begin, you need to establish a connection to the Internet over something other than wireless (Ethernet is ideal). You might think that to start a new wireless network, you could simply click on the AirPort icon and select Create Network, but this will make an IBSS (ad hoc) network. In order to turn your Mac into a true access point, you need to go to System Preferences

Check the box labeled Airport, and make sure the drop-down menu says "Share your connection from Built-In Ethernet." Before clicking the Start button, you probably want to set up your wireless parameters. Click the AirPort Options… button, and you should see a drop-down menu like the one shown in Figure 5-15. 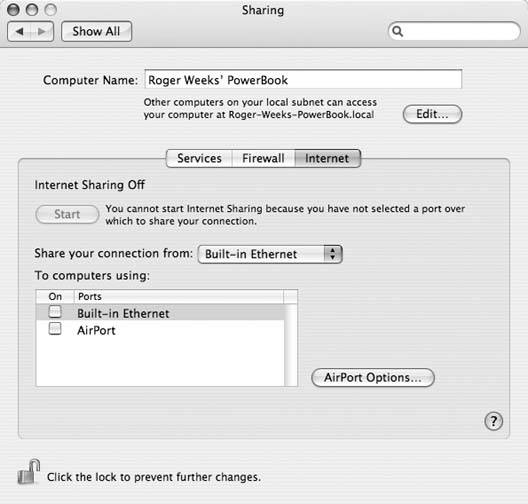 Specify a network name and channel, and turn on WEP if you need it. Click OK, and then click the Start button. Close the control panel, and your AirPort icon should change to include an arrow, as shown in Figure 5-16. This means that your AirPort is now operating as a real access point.

To turn off sharing and return to normal AirPort operations, go back to the Sharing control panel, select the Internet tab, and click the Stop button. As long as you have Internet sharing enabled, anyone in range of your Mac will see it as a normal access point, and can access the Internet just as if it were a hardware access point. 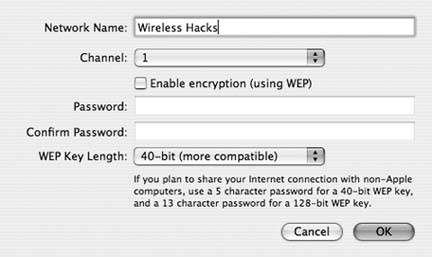