Hack 62. Mobilize Your WRT54G with the WiFiCar

Why keep your wireless router in one place when you can give it wheels?

I've always thought that remote-controlled toy cars offer a great platform for other uses. For a while now, I've been thinking about how to put a small-form-factor PC motherboard on an RC car, but that would require quite a large car. When I stumbled upon OpenWRT [Hack #67], I realized that the WRT54G provided wireless, processing, and general-purpose I/O interface capabilities in one small package! With a wireless router mounted on a Wi-Ficontrollable car, you can patch holes in your wireless coverage, drive the car from any Internet terminal in the world, or a variety of other things that I couldn't think of right away. But I knew it would be cool. So I set off to mobilize my WRT54G.

There are two separate hacks that need to be done here: the software for the router, which will accept TCP connections and output the proper values to the GPIO pins, and the hardware, which will take those GPIO outputs and use that data to drive the car. Let's start with the software.

OpenWRT is a minimal Linux distribution for the Linksys WRT54G. The router still works as a router, which I think is impressive, while allowing you to tinker with things such as adding an SD card reader, adding an LCD, or whatever you want. For my hack, I borrowed code from the LED System Load Monitor and the SD Card Reader, both found on the OpenWRT web site (http://wiki.openwrt.org/OpenWrtDocs/Customizing). The SD Card Reader documentation identified GPIO pins on the router's circuit board, and the Load Monitor documentation provided a simple tool to control those pins.

I found a web site (http://pont.net/socket) that provides sample TCP socket server/client code written in C. After setting up a cross-compiler to compile programs for the router, I compiled this code and was pleased to see that it was working. I also tested the GPIO tool from the LED System Load Monitor to see that it also worked well on my router.

Then, I merged these two programs. My program modified the TCP server to send the output to my subroutine, which determines which byte was sent. If the byte is an ASCII digit, corresponding to values 4957 (zero is excluded), the program will set the GPIO pins so the car drives in the direction of that digit on a telephone keypad. Receiving a 1 makes the car drive forward-left, 2 is forward, 3 is forward-right, 4 is left, 5 is stop, 6 is right, 7 is back-left, 8 is back, and 9 is back-right. It took a while, but I eventually got that to work.

To avoid typing numbers into an SSH connection, I wrote a small Visual Basic program to simplify sending data to the car. It uses the arrow keys on your keyboard to determine which data to send. I had trouble sending a null character from VB, but it works now. I tried porting it to eMbedded Visual Basic so that it runs from my PDA, but it, too, has trouble sending null characters. Once I get it to work, recall Q in James Bond, Tomorrow Never Dies: "Just push your finger gently across the pad to drive the car…."

So, that's the software component. The hardware proved every bit as challenging for an intermediate hacker like me. But if you're careful, you can avoid the mistakes that I made and save a few bucks.

Our remote-control victim car is a Chevy Avalanche, shown in Figure 4-39, that I picked up for about $10 at the local Radio Shack. Its retail price is about $30; this one was cheap because it was a display model with no remote. Since the whole point of this hack is to replace the remote with Wi-Fi, it was an even better deal! 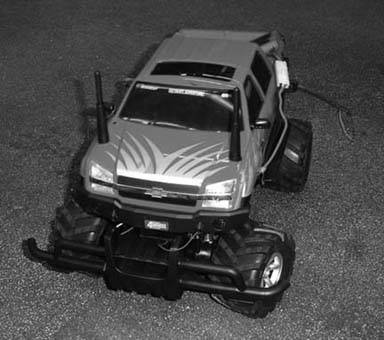 The router's GPIO pins can source only a few milliamps, but the drive motors of the car want up to two Amperes (amps) at stall. To convert between the low-power outputs of the router and the high-power needs of the car, Bell Laboratories invented the transistor in 1947 to do exactly that.

It is possible to build this schematic from scratch, using eight transistors to drive two motors. However, this is unnecessarily complicated in the Integrated Circuit age. For a few bucks, you can get all this in a neat little package. I used the SN754410, available from Acroname for five dollars at http://www.acroname.com/robotics/parts/R6-754410.html. Fortunately, I ordered three.

Figure 4-40. Schematic for the driver 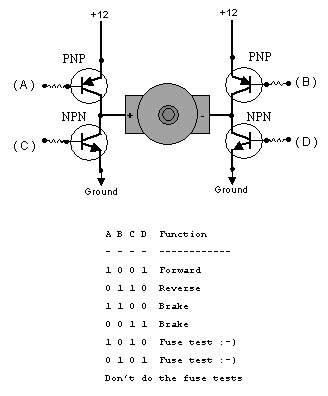 Using a small proto-board and five-volt regulator model 7805 (http://tinyurl.com/wqbv) from Radio Shack, I put together a small driver board. It had 10 wires coming out of it: two power wires connected directly to the drive battery, and four small wires connected to a telephone connector that plugged into the router (so the router wasn't soldered to the car).

The drive motors, however, were soldered directly to the board, providing the last four wires that came into the board. The first time I powered it up, I was sure to test all the connections, because I felt something bad would happen. It did; I made sure that the power wires were indeed the power wires, but I forgot to check the polarity! The chip went up in smoke, leaving charred remains. Undaunted, I rebuilt the circuit with one of the other chips that I ordered and, finally, the driver board worked. Figure 4-41 shows the finished driver board installed inside the Chevy.

I taped the router to the bare base of the car to test it out; it worked! It looked ugly, but after connecting to the car's access point, using an SSH client to start the RC car server program rcServ, and loading my VB client, the car moved! I could have finished there, but I decided to see if it could work with the Chevy Avalanche cover on, just for looks. 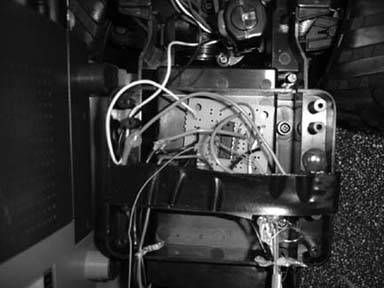 A friend of mine, Manny, decided to take it upon himself to do this part. Using a dremel, he cut holes in the side of the case for the legs of the router, and also two holes up front for the antennas. Although I calculated that the car would work up to a hundred feet without the antennas, he decided to put the holes in, anyway. Given that it was his first time using the tool, results were as expected: the case still has to be stretched to fit the router, and even so it scratches the sides, as well as the antennas.

Needless to say, the blue and black protrusions in the side of the red car are also an eyesore. Although it is better than without the cover, I would have chosen a better way to fit the router inside the case. Hey, if you want something done right, you have to do it yourself. But, as shown in Figure 4-42, it does look cool!

Here's the final result: the WiFiCar. It's far from perfect, but it does provide a base from which to expand; many people have contacted me about adding cameras, GPS, autonomy, and various other additions to the car. I'm also working on a bigger version using a 1/6th scale Hummer. But this is, to my knowledge, the first self-controlled wireless router. 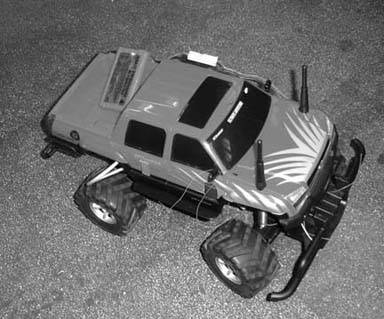