Significantly increase the range, sensitivity, and functionality of your WET11.

The Linksys WET11 (http://www.linksys.com/products/product.asp?prid=432) is one of the most inexpensive Ethernet client bridge products on the market. It works with virtually any Ethernet device, and doesn't require any special drivers to configure. Many people use the WET11 to connect devices that otherwise can't accommodate a radio with their wireless network. For example, they are ideal for connecting to networked appliances such as the PlayStation 2 or Xbox to avoid having to run Ethernet cable to your television.

Linksys has manufactured the WET11 for several years. Its popularity can be gauged by looking at the Linksys web page and noting how many other 802.11b-only devices are still being sold (hint: not many). It has a big brother called the WET54G, but it is expensive and is not hacked as easily as the WET11.

As with all embedded hardware devices (particularly those manufactured by Linksys), it is a good idea to keep up on firmware updates. Updated firmware usually resolves most flaky behavior and occasionally even gives you a couple of new features. Previous firmware updates have fixed problems with DHCP.

The WET11 even has a crossover switch for the Ethernet side, making it simple to install, regardless of whether you are using a straight-through or crossover cable. Its tiny size and simplicity make it an ideal component for any situation where you need to get an Ethernet device to act as a client to an access point.

A WET11 can also be used to get entire networks online when used in conjunction with inexpensive firewalls like the Linksys BEFSR41. Simply connect the WET11 to the WAN port on the firewall, and every device plugged into it can share the WET11's wireless connection. People have had mixed results when using the WET11 directly bridged to a hub or switch, due to the implementation of the tiny device's MAC address handling.

But these features aren't nearly enough for wireless hackers. Here are a couple of nifty hacks for this piece of hardware.

The WET11 can easily accommodate an external antenna. Simply unscrew the small rubber ducky antenna and replace it with an RP-SMA pigtail [Appendix B] and an omni antenna of your choice. This alone significantly improves the range of the WET11 and, when using a directional antenna, can help reject noise and cause less interference for nearby networks. Save the discarded antenna for use in other projects, such as an add-on antenna for your PCMCIA radio card [Hack #52].

Possibly the greatest drawback to the WET11 is the cheap radio card installed at the factory. It ships with a low-end, 80mW radio with less-than-average sensitivity. Fortunately, the card is based on the Prism 2 reference design. If you don't mind voiding your warranty, you can upgrade the card to a much more sensitive, higher power Senao or EnGenius card. The Senao (or EnGenius) 2511 Plus EXT 2 is an ideal card, as it even uses the same internal antenna connector, making the upgrade easy. Before you proceed, upgrade the replacement card with the latest firmware. Details on upgrading Prism 2 firmware can be found at http://linux.junsun.net/intersil-prism.

Unplug the Ethernet and power from the WET11. Remove the rubber feet from the bottom of the WET11 and open the case. Carefully unplug the antenna connector, unscrew the card from the brass stand-offs, and remove the internal card. Unfortunately, you won't be able to reuse the standoff screws, as the replacement card has a slightly different physical packaging.

Plug in the new card, and reconnect the antenna cable to it. If the PCMCIA card is oriented with the antenna connectors toward the right (and the Senao/EnGenius label is facing you), you want to use the connector on the top. This is the same side that was connected to the original card.

Finally, reassemble the case and power it up. You should now be enjoying the benefits of a much more sensitive radio and a full 200mW of power. Figure 4-12 shows an open WET11 with a Senao 200mw radio card and pigtail. 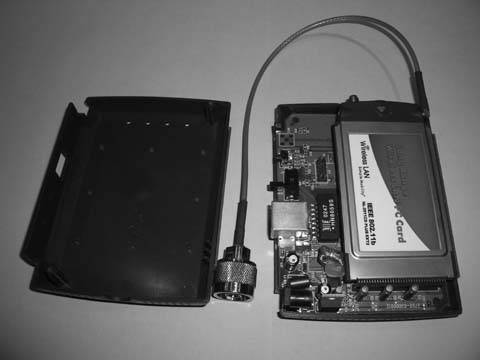 The WET11 is expecting a 5V DC power source. A number of people have reported success using the WET11 with a battery pack in the field. Using four NiMH batteries in a series (at approximately 1.2V each) yields a 4.8V battery, which seems to work fine for several hours with the WET11. The WET11 can accept voltages a bit higher than 5 volts (some say as high as 12V), so you could even theoretically use four Alkaline batteries (4 x 1.5V = 6V). If you make your own battery pack, be sure to observe the proper polarity! Also note that operating time will likely be significantly shorter if you transmit a lot and use the 200mW card as described previously.

An external battery pack can be handy for generating a signal source when doing a site survey, or for hiding a signal source in a game of wireless hide-and-seek. There is a detailed discussion, with photos, online from a Belgian site at http://reseaucitoyen.be/?SourcePortable (be warned; the entire site is in French). With the size and ubiquity of the WET11, it's no wonder that so many people are hacking on it.