Build yourself a motorized scanner that shows you all wireless networks in 360 degrees.

If you've done any number of wireless surveys, you know that one of the most time-consuming parts of the survey is moving the antenna. This is especially true if you are working with highly directional antennas. Sometimes, you might not have another person with you to move the antenna and take signal measurements.

The Automatic WLAN Scanner (AWS) is designed to help with these problems. It will perform a 360-degree scan for wireless networks and then give you the SSID, signal strength, noise, and best antenna position for all discovered networks.

An AWS can be built inexpensively. For my prototype system, I used a number of components, many of which were scavenged from old computers or from second-hand electronics stores. You will need:

Figure 4-13. Cantenna with magnetic base 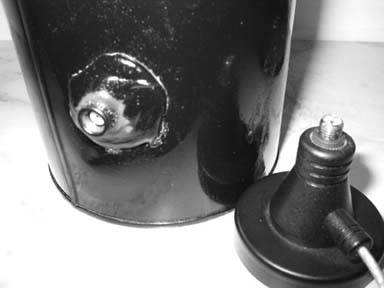 Once you have completed the cantenna, the next step is to build the base, which will house the motor, worm gear, cog-wheel, and ball bearings to drive the cantenna. Figure 4-14 shows an overview of the assembled base, turned upside down. I used a hard drive frame from an ATX computer case, but you could cut your own sheet metal as well.

Figure 4-14. Upside-down view of the base 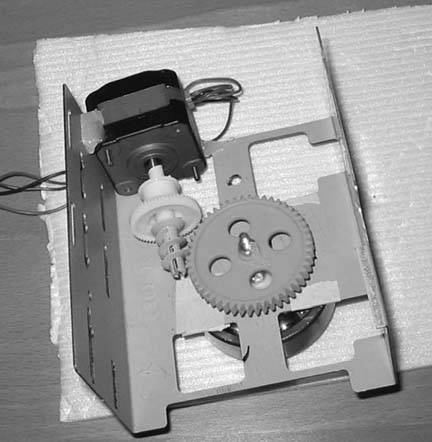 As you can see, placement of the motor is critical. You will want to first get the cog-wheel installed using a long bolt and nuts, and connect the bolt to the ball bearing on the other side of the base, as shown in Figure 4-15.

Now that the cog-wheel and ball bearing are in place, attach the worm drive to the motor shaft and experiment with the best placement for the motor. When you find the best place, make sure to mark it clearly on the base so you don't lose the location. Next, use the hot glue gun to hold the motor in place on the metal hard disk frame. 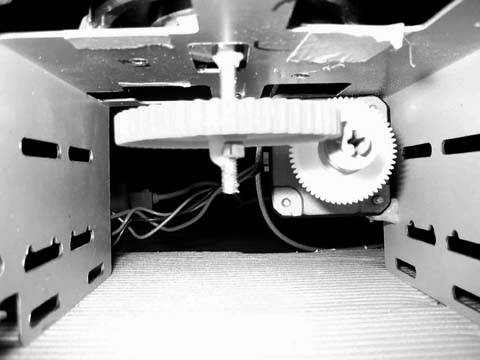 With the base constructed, you can now turn it over, as shown in Figure 4-16. The ball bearing will rotate under command of the stepper motor and worm drive, and the magnetic base of the antenna will hold the can firmly in place while the motor turns.

I chose to house the SMC800 card in a small metal tin, which gives the card protection when the lid is closed. One end of the tin is cut out to allow connection of the parallel cable to the SMC800. In the other end of the tin, I punched a small hole for the power cables. The three power cables from one side of the ATX power cable were ran through the tin and connected to the SMC800 card pins that drive the external motor, and the other side of the connector was wired directly to the motor.

Power is supplied to the SMC800 card using an external AC/DC adapter. Prior to the installation of the card in the red tin, I made a third hole to allow insertion of the power adapter to the card. Figure 4-17 shows the power and data connections to the card.

Figure 4-16. The base ready for antenna mounting 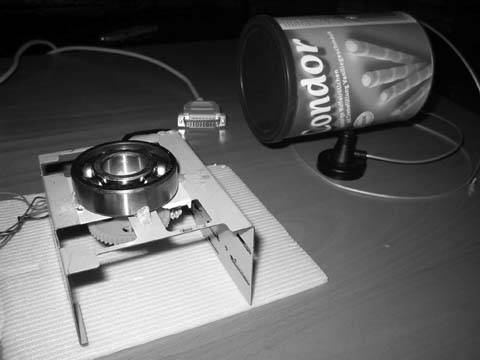 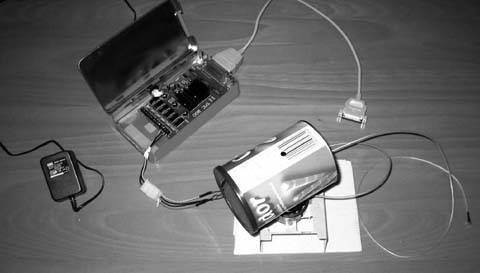 The hardware construction of the AWS is complete at this point. For my finished unit, shown in Figure 4-18, I spray-painted the tin and the cantenna and enclosed the base in waterproof vinyl. Lastly, I sealed the area between the ball bearing and the vinyl with hot glue. 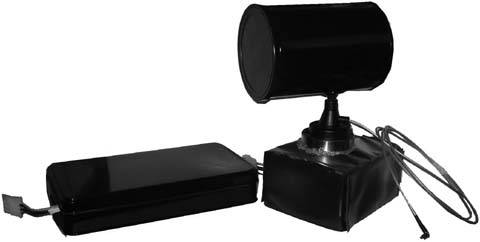 The SMC800 is an old card that has only DOS drivers available. Since my project relies on NetStumbler [Hack #24] to discover the wireless networks, I had to write new Windows XP drivers for the SMC800. These drivers, along with the other software I wrote for the project, are all available on my web site at http://aws.netzfund.de.

The second necessary piece of software is a Visual Basic script, which runs under NetStumbler and reads out the necessary wireless data.

The third piece is the AWS control software, which uses the new driver for the SMC800 to control the card over the parallel interface. Using the software, you can set your own scan speed, depending on your requirements. You can also start and stop the scan, and then go to a specific stepping position on the motor.

Figure 4-19. The AWS software in action 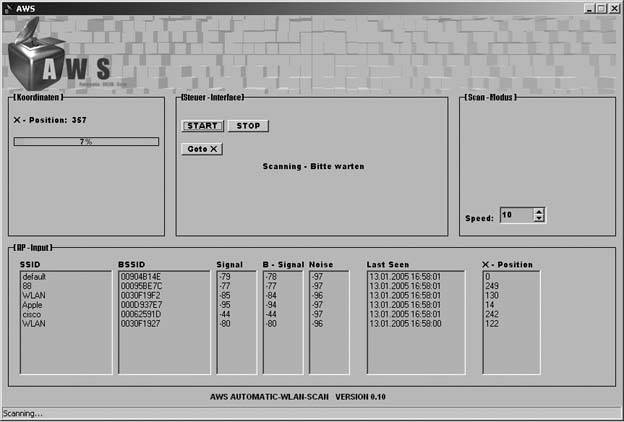 The next feature that I plan for AWS is a position-locating system, so that AWS will steer the antenna in real time to follow a moving wireless source. Obviously, one limitation of the AWS as built is that it is capable of scanning only on a single flat plane. In order to scan above or below the horizon, you will need a variable mount for the cantenna.