Make an even higher gain antenna out of a recycled Primestar dish.

The Primestar dishes [Hack #87] are high-gain, low-cost, parabolic reflectors with an offset feed. They have superior sidelobe performance when compared with a wire grid antenna, reducing the chance that somebody off of the axis of your link will be able to interfere with your signal.

However, the spacing between the feed slot and the feed mounting bar is small. It is about 55 mm, which is less than a half wavelength at 2.4 GHz. Failure to couple efficiently to the dish's wide aperture or to minimize radiation into the mounting bar results in poor gain and/or significant sidelobes.

The feed is oriented for vertical polarization, as shown in Figure 6-9. To make it horizontal, merely rotate the feed by 90 degrees. You will lose about 3 dB of gain when using the horizontal mode, as the biquad's radiation pattern is a better match for the dish's oblong shape when vertical polarization is used.

Figure 6-9. The biquad feed mounted on the dish 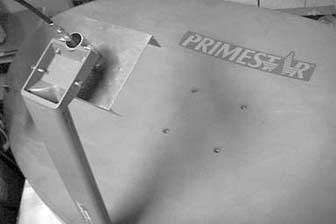 We used printed circuit (PC) board scraps for the 110 x 110 mm reflector, but it will be just as effective if made out of sheet brass or copper. Aluminum can be used if soldering of the rigid coax is not required at the feed point.

The reflector's lips are 30 mm high, and serve to reduce coupling into the mounting bar. Note that they are only required along the main edge axis of the reflector. The lips cut down radiation from the rear lobes of the biquad by about 6 dB. The best SWR is obtained when the biquad loop is about 15 mm above the ground plane, and the SWR may be adjusted by varying this distance.

A piece of 3/4-inch copper piping makes a tight fit with the mount supplied on the Primestar dish. The rigid 0.141-diameter coax is soldered to the ground plane to provide physical support for the structure. If the biquad element is constructed carefully, there will be no component of radiation along the axis of the coax, there will be no current induced into the coax outer conductor, and a balun is not needed.

To make the element, take a piece of 1.2 mm bare or enameled copper wire exactly 244 millimeters long. Bend it in half, and then make the bends at the halfway point on each leg (where the solder joints will be). Next, bend the four remaining right angles so that the element sides are rectangular and there is about a 1.5 mm gap for soldering to the feed. The widths of the two quad elements will be approximately 30.5 mm from wire center to wire center. Figure 6-10 shows the completed feed. 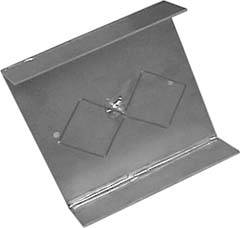 You can use a standard coax cable to connect at this point if you do not have rigid cable available, but you will have to figure out how to support the loop physically. The best SWR is obtained when the loop is about 15 mm above the ground plane and when the reflector is mounted about 10 mm in front of the Primestar's feed bracket.

That's all there is to it; you now have a dish with 2731 dBi of gain and negligible sidelobe radiation (<40 dB). The beam width is about 4 degrees. Figure 6-11 shows a model of the BiQuad's radiation pattern. 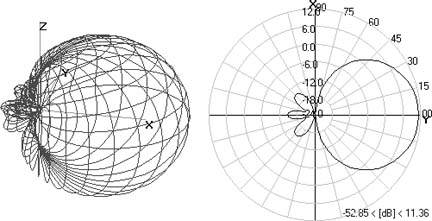 Need a little bit more range for your PCS or GSM phone? You can make a Biquad for 1,900 MHz exactly the same as the preceding one, but you must start with a 304 mm long piece of wire, and fold it into eight arms that are approximately 39.5 and 38.5 mm long. The ground plane needs to be a little larger; use one about 160 mm (6.2 inches) square.

If you don't have a coaxial RF input jack on your cell phone, you can couple the signal into its existing antenna using a single quad as a matching stub. It's not perfect, but in practice it works well. Solder an alligator clip to either of the high voltage apex (39 mm from the feed) of a single 152 mm loop, and clip that to the antenna stub you are currently using. Now you can put 100 feet of coax between your phone and the antenna on your roof to operate even in fringe areas.