Put your AP where everyone can see it: on the ceiling.

Back in May 2003, some friends and I were hanging out at a really good coffee shop in Sebastopol, CA. This particular coffee shop is housed in an old wooden train station building, with high ceilings, old-style hanging industrial lamps, and even a couple old trains still on the tracks, serving as small businesses.

Unfortunately, there's no wireless available at this shop. There was, once upon a time, back when the O'Reilly offices were located across the street. But that was ages ago, and even then the signal wasn't all that it could have been. As we sat around drinking our high-octane beverages, we got to talking about the best way to provide coverage in such a huge space. The room we were in was a common room, open at all hours (the front entrance is huge, and doesn't even have a door.) While you could put an access point in one of the enclosed shops in the building, coverage in the open area would likely be spotty at best. You would want the AP to be located high up off the ground, where everyone could see it.

Almost simultaneously, we all looked up and noticed the lamps hanging from the wooden rafters. What if you could house an AP in a package the size of a large light bulb and install it in an existing light socket? This seemed like a good idea, but how would you get network access to it without running CAT5 to the socket? Easy: Powerline Ethernet.

With the recent release of the Siemens' SpeedStream series of tiny access points and other Powerline Ethernet devices, such an insane, caffeine-induced idea as an AP in a light bulb might be a possibility. These devices are quite small, about the size of a standard wall wart, as shown in Figure 4-9. They sport a Compact Flash wireless adapter that acts as the AP. It's the same card as the popular Linksys WCF11 but with a different sticker.

The brilliant bit is that the wireless network bridges directly to the AC power, so a standard Powerline Ethernet adapter anywhere on the same power circuit can provide Internet access to as many APs as you care to plug in. At a mere $85 retail, we couldn't resist picking one up and seeing what we could do with it. 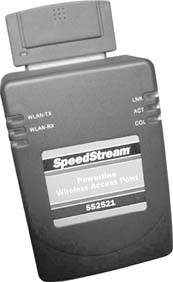 One of our first concerns was practical rather than technical. Obviously, if you're going to replace a light bulb with an access point, the room will likely get darker. That is, unless the AP can also provide light as well. After fooling with a couple of lighting ideas, we finally soldered some copper romex onto a fluorescent bulb as a prototype. The romex is rigid enough to hold the lamp steady, and easy to solder. The fluorescent bulb would obviously be dimmer than a 300-Watt spot lamp, but it would be better than nothing. And as a flourescent runs much cooler, it probably wouldn't turn the guts of the access point to liquid. This solved the light issue well enough for the moment, but how could we connect the whole thing to a standard light bulb socket?

One trip to the hardware store later, we had a variety of Edison plugs, sockets, and adapters. We settled on a simple extender type of device, with a female socket on one side and a male plug on the other. Again, the contacts were copper, making it easy to solder on more romex, as shown in Figure 4-10. We had the basic design together, but what could we possibly use for housing?

Tupperware, of course. Adam painted the inside of a Tupperware bowl white, and the entire device just managed to squeeze inside. We first attempted to take the SpeedStream unit apart to save space, but it's already tightly packed inside; much of the unit is occupied by a large transformer. Besides, keeping the original enclosure made us all feel a bit more relaxed about plugging the thing in. The Edison plug poked through the bottom of the bowl, where we simply screwed on another connector to keep it tightly attached.

Figure 4-10. The AP, Edison connector, and bulb connected with romex 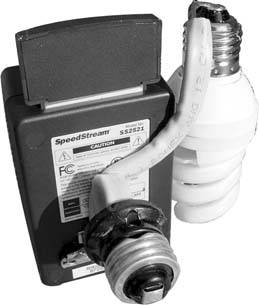 So, with all of the technical considerations accounted for, all that was left was the all-important marketing phase of the project. Some electrical tape and one vinyl sticker later, the NoCat Night Light was born! See it in all of its glory in Figure 4-11.

But how well would it actually work? Wouldn't the fluorescent throw off all sorts of noise that would interfere with the AP? We certainly thought so. Unfortunately, we didn't have a machine handy with which to do real throughput testing, but DSL Reports (http://www.dslreports.com/stest) showed a very respectable 2Mbps or so. This was well above the rated capacity of the cable modem network we were using, so we were definitely satisfied with the results.

One big improvement to the design would be to replace the fluorescent bulb with a bright LED array, or even a simple socket so you could use whatever (low temperature) light source you like. Our design makes much more sense than Siemen's original, as it gets the AP up off of the ground and above your head, where presumably many more people can see it. Adding more APs is as simple as screwing in a light bulb, as they bridge directly to the same AC Powerline segment, and terminate at the same Ethernet.

Keep in mind that this design is a prototype, and while it works in casual testing, it hasn't been tested for hours of continuous use. At the very least, it would be a good idea to insulate the bare contacts and find a better way of ventilating the fluorescent bulb (or replacing it altogether with an LED array). Build it at your own risk, but by all means have fun while doing it. 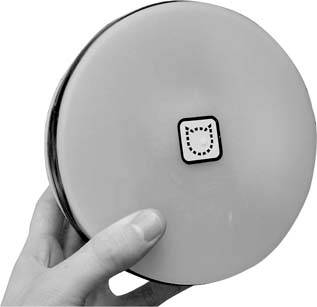