Hack 95. Build a Wireless Network for the Large House

If you have a large home (or even a smaller one with outbuildings that you want to cover with your wireless network), building a wireless network that covers the whole thing is not impossible.

Large houses can be a problem for wireless networks. Apart from the issue of trying to remember which bedroom is yours, most consumer-grade wireless access points aren't powerful enough to provide wireless access over a home that's bigger than your typical split-level house. And you don't have to be a dot-com millionaire to have problems: if you have outbuildings or a large garden that you want covered by your wireless network, a single router probably won't cut it. Fortunately, it isn't difficult to extend the range of a wireless network to cover the entire house and garden.

Let's take a typical example. Say you live in a large house or apartment that's spread over several floors, as shown in Figure 7-4. You've bought a wireless router or access point and tried it in several locations, surveying the signal strength around the house. The signal won't go between floors, because it can't penetrate the floor. If you put the router on one floor, you get no signal (or a signal too weak to use) on the next.

So, we are going to put the wireless router on one floor, and then run an Ethernet cable from the router up to the next floor and add an access point that provides wireless signal upstairs. Similarly, you might find that there is a dead spot in one room of a smaller house that you want to add wireless coverage to, and adding an access point can easily do this.

Figure 7-4. Wireless coverage that does not span the whole house Router 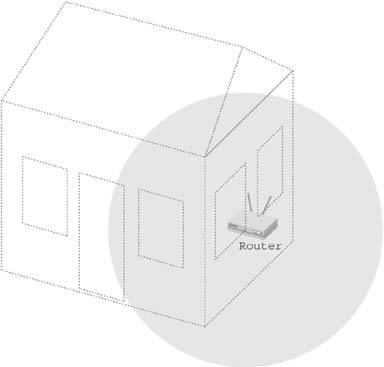 Next, you'll need to run an Ethernet cable from the wireless router to the access point. You can either buy a pre-made cable or make your own. There's a good guide to rolling your own at http://www.groundcontrol.com/galileo/ch5-ethernet.htm. For this hack, you'll need a standard cable, not the crossover type. Either way, use a Category-5 cable that can support gigabit networking speeds. (Even if your network isn't that fast, it is easier to use a cable that supports it than running a new cable when you upgrade.)

You'll also need to find a way to run the cable between the floors. If you have air conditioning or other pipes that run between floors, they provide a handy prebuilt route, and there's usually enough room to run a cable or two alongside them. 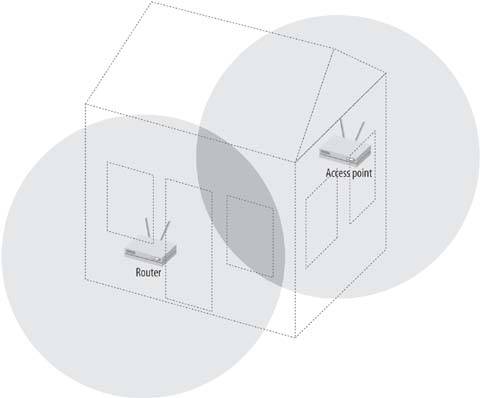 You can use the same SSID for both networks if you want, but I generally recommend that you use a variation to avoid confusion. If, for instance, your network is called HomeNet, set the router to use the SSID of HomeNet-first and the access point to use HomeNet-second.

You can also adapt this to provide coverage to outbuildings and outdoor areas. Instead of running the Ethernet cable between floors, run the cable to the outbuilding or a location that provides coverage to the area. If you need to run the cable outdoors, either bury it in conduit at least eight inches underground or use special hardened outdoor Ethernet cable running along a fence or between poles. Gel-filled direct burial Ethernet cable is also available, budget permitting. In any case, the maximum length you can run is around 100 meters. Any longer than that and you will need to add a switch or hub to the run, or look at using a wireless link [Hack #69].