Install wireless gear on your roof without piercing it with mounting hardware.

If you intend to build a long distance wireless link, you will likely need to get your antennas up as high as they can comfortably go. For many people, adding a dedicated tower is out of the question (for aesthetic and local ordinance reasons), so the next logical place for gear is the rooftop.

Ideally, the equipment should be installed in such a way that it doesn't pierce the roof of the building, lest the rainy season come and bring expensive roof repair bills with it. If you are working with a flat roof, you may find it useful to build a small sled on which to mount your gear. Figure 6-21 shows a typical plywood sled with a 24 dBi dish mounted on it.

It consists of a piece of plywood that is a few feet square around with sections of 2 4 screwed to it from above. This gets the wood slightly up and off of the roof's surface to allow rainwater to flow past as it normally would. The sled is weighed down with cinder blocks, and has an inexpensive aluminum tripod mount (found at Radio Shack) bolted to it. Figure 6-22 shows a detail of the experimental equipment housing.

Figure 6-22. A rubber mailbox, a cheap and effective solution 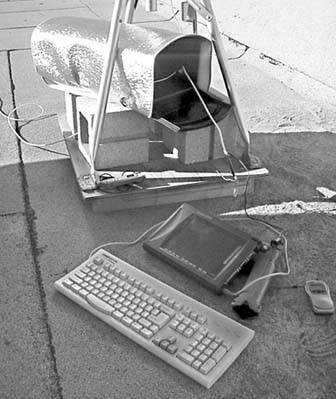 In this installation, cost was one of the primary concerns. The owner had a Stylistic 1000 that needed housing, and the cheapest deal we could find at the time was a rubberized mailbox (just a few dollars at the hardware store). When closed, the mailbox is practically water tight, but unfortunately, it has a matte black finish, which will soak up the sun and overheat the electronics inside. This was mitigated by wrapping the box in a cheap Mylar wind-shield reflector, which keeps the inside of the box surprisingly cool, even on hot summer days. Note that the Stylistic has no ventilation requirements, so an airtight box was an ideal choice. The cables were run through a hole cut in the side of the mailbox that was then filled in with silicone compound.

This choice of mounting hardware might sound ridiculous, but you can't argue with this node's uptime: over two years! Granted, this is in Northern California, where the winters are quite mild and the summers aren't boiling too hot. But then again, this node isn't running on a Compact Flash card, but instead uses an eight-year-old PCMCIA hard drive (found installed in the Stylistic when purchased from the local surplus electronics store). We originally installed it just to see how long such a setup would last and were pleasantly surprised at the results. The only downtime this node has suffered has been to upgrade the radio card.

The other end of the link isn't on a flat roof, so we couldn't use a sled. Fortunately, there was plenty of signal available at the pitched edge of the roof, allowing us to use a recycled DSS dish mount. You can see it in action in Figure 6-23. 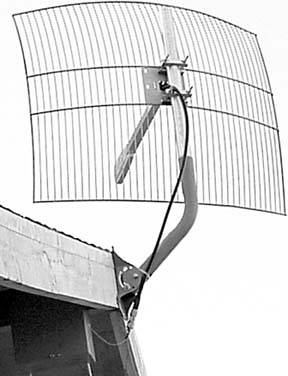 By adding a short piece of pipe, the DSS dish mount was extended enough to accommodate a 24 dBi dish. The metal box beneath the eaves is a $10 metal sprinkler box with an Orinoco RG-1100 installed in it. By bolting directly to wooden studs, we avoided piercing the tar paper on the roof. The two white lines running to the box are Ethernet and power for the RG-1100.

The owner had a considerable amount of Ethernet cable on hand, and decided to run the data separate from power, rather than bother with power over Ethernet [Hack #56]. These cables were later tacked back and run under the eaves, and were virtually invisible from the ground.

Another approach is to avoid the use of plywood altogether and simply make a base out of wide wooden planks, as shown in Figure 6-24. These can be weighed down with sandbags or cinder blocks, and the pole steadied with guy wires if necessary. These materials can be easier to get up on a roof than a sheet of plywood and won't have as much potential wind load. 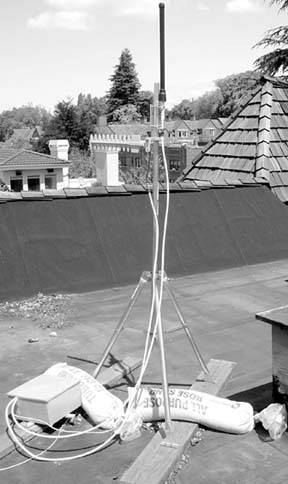 If you're curious about the white antenna feed line in the photo, yes, it is in fact Heliax. The omni and yagi terminate in a metal sprinkler box (screwed to one of the boards), which contains a Soekris net4511 [Hack #53]. The Soekris is fed Ethernet and power over a piece of outdoor CAT5, which enters the building through a skylight. The 12 dBi yagi feeds a link to another part of town a couple of miles away, and the 9 dBi omni provides local service.

Another popular choice for roof mounting is the metal chimney mount. This type of mount consists of metal bands that are tightened around an existing vertical structure, such as an unused chimney or metal pipe. This kind of mount requires no additional weight, and makes no actual contact with the roof surface. When using this style of mount, be sure to observe fire codes, and only attach equipment to surfaces that do not heat up.

Roof mounts don't necessarily need to be elaborate. Antennas for 2.4-GHz gear tend to be small and have little wind load, allowing you to get away with surprisingly little for structural support. Whenever working on roofs, remember to take your time, bring a friend, and work only in good weather when you have plenty of daylight. Building your own rooftop node can be very exciting, but remember that roofs can be dangerous places, no matter how many times you have been up on them.