Use a cantenna waveguide in conjunction with a recycled satellite dish.

Primestar was purchased a few years ago by DirecTV, who phased out all the Primestar equipment. This means that the dishes have been trashed and are available for other uses such as the one I describe here. It is easy to turn a surplus Primestar dish into a highly directional antenna for 802.11b/g wireless networking. The resulting antenna has about 22 dB of gain and is fed with 50 ohm coaxial cable. LMR400 or 9913 low-loss cable should be used if the radio source is more than a few feet from the antenna. (See Appendix B for more details on cabling options.)

Figure 6-7. Primestar dish on the roof 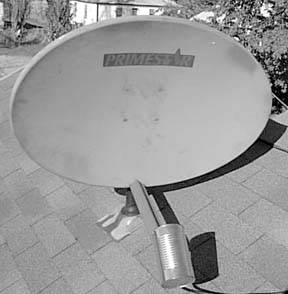 To build your own, you'll need the following parts and a couple of hours:

After deciding on a place to mount your antenna, remove the apparatus at the feed position of the dish. Be sure to save the mounting hardware. Using a can opener, cut one end of the juice can out, drink the juice, and wash the can out. Solder a quarter wavelength (1.15") of wire onto the center conductor of the chassis-mount N connector.

Using a punch or whatever other tools you deem necessary, mount the N connector so that it is about 1.2" from the closed end of the juice can. It is also a good idea to put a drip hole at the lowest point of the can to ensure that water doesn't build up inside. After having one of these on my roof for a few months, it seemed to be a good idea to put a plastic lid on the open end of the can so that the inside doesn't rust. During the time mine has been up, it has rusted and I have lost a couple of dB of signal strength. These two details may be correlated.

Mount the juice can so that the opening is just at the focus of the dish. In my installation (see Figure 6-8), I didn't quite achieve this, but I only lost a dB or two by taking the easy route. I still have about 25 dB signal-to-noise ratio, so the loss wasn't important to me. The easy route is to mount the can as far back as you can along the mount, by punching two holes through the can and bolting it in. The perfectionist's method would be to find the best feed place (which I found to be just a little farther back) and use some PVC tubing to extend the mount so the feed is in the perfect position. In some installations, every dB will count, which should be taken into consideration.

This antenna is very directional. You must have it aligned very carefully or you will lose a lot of signal. It also needs to be mounted securely, so the wind won't be able to rotate it even a few degrees.

This antenna is an offset fed dish, which means that the feed horn (the juice can) is not positioned as much in the way of an incoming signal, so it doesn't shadow the dish. This makes the aiming a bit tricky, because it actually looks like it is aimed down when it is aimed for the horizon (as you can see in Figure 6-7).

You can use the scale on the dish mount to determine the elevation it is aimed at. The dish isn't as directional in the up/down directions as it is side to side. This is fortunate, because without turning the mounting upside down, a standard mount will only get it a few degrees above the horizon. I sacrificed a dB of gain here by not turning it over, mostly because I mounted it on a vent pipe, and didn't want to put that kind of wind load on it. As already mentioned, I don't really need the extra signal either.

Figure 6-8. The inside of the feed can 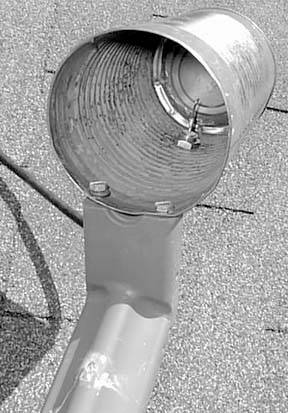 As if this hack weren't already hackish enough, this antenna is easily adapted for use with 802.11a gear at 5.8 GHz. Simply scale the dimensions on the feed can and the excitation antenna to 2.4 / 5 = 48% of the dimensions just mentioned. Remember that wavelength goes down as frequency increases, so antennas of equivalent gain at higher frequencies are actually smaller.