The single most effective way to extend the range of your access point or client radio is to add an external antenna. Contrary to popular belief, antennas do not give you more signal than you started with (that's what amplifiers are for). They focus the available signal in a particular direction, much like what happens when you turn the focus head of a flashlight. It doesn't make the bulb any brighter, it just focuses what you have into a tighter space. 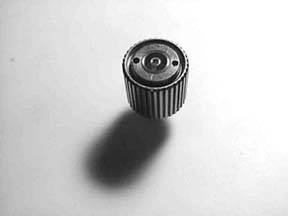 Focusing a flashlight gives you a brighter beam that covers a smaller total area, and likewise, more directional antennas give you a stronger perceived signal in a smaller area. All antennas are somewhat directional, and the measure of their directionality is referred to as gain. Typically, the higher the gain, the better the range (in the direction that the antenna radiates best in).

Another important characteristic of antennas is the phenomenon of polarization [Hack #100].

There are a few general types of antennas suitable for use at microwave frequencies. Each works well for its own application, and no single antenna works best for every application. When shopping for antennas, be sure to look at the actual radiation pattern of the antenna to be sure that it fits your needs.

Plan your goals ahead of time, and configure your network to meet those goals. The following sections describe the most common types of antennas, listed in rough order of increasing gain.

Omnidirectional antennas (or omnis) radiate outward in horizontal directions in a roughly equal manner. Imagine putting an enormous donut around the center pole of an omni: that's what the radiation pattern looks like. Omnis are good for covering a large area when you don't know which direction your clients might come from. The downside is that they also receive noise from every direction, and so typically aren't as efficient as more directional antennas.

As you can see in Figure B-9, they look like tall, thin poles (anywhere from a few inches to several feet long), and tend to be expensive.

The longer they are, the more elements they have (and usually the more gain and the higher the price). Small "rubber ducky" antennas ship standard with many access points, such as the Linksys WAP11 or the Cisco 350. Omni antennas are mounted vertically, like a Popsicle stick reaching skyward. They gain in the horizontal, at the expense of the vertical. This means that the worst place to be in relation to an omni is directly beneath (or above) it.

The vertical response improves dramatically as you move away from the antenna.

Sector antennas come in a variety of packages, from flattened omnis (tall, thin, and rectangular) to small flat squares or circles (Figure B-10). A close cousin of the sector is the patch antenna, which shares most of the same properties. Some are only a few inches across, and mount flat against a vertical wall or on a swivel mount. They can also be ceiling mounted to provide access to a single room, such as a meeting room, classroom, or tradeshow floor. As with omnis, cost is usually proportional to gain.

Figure B-10. A sector antenna, flat and thin

Picture an omni with a mirror behind it, and you'll have the radiation pattern of a sector antenna. Sectors radiate best in one direction, with a beam as wide as 180 degrees or as narrow as you like. They excel in point-to-multipoint applications, where several clients will be accessing the wireless network, all coming from the same general direction.

As you can see in Figure B-11, a yagi looks something like an old television aerial. Some yagis are simply bare, like a flat Christmas tree, and are pointed vaguely in the direction of communications. Others are mounted in long horizontal PVC housings. They can work well in point-to-point or point-to-multipoint applications, and can usually achieve higher gain than sectors. 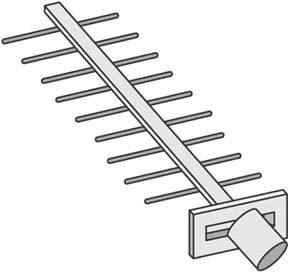 The typical beam width can vary from 15 degrees to as much as 60, depending on the type of yagi design. As with omnis, adding more elements means more gain, a longer antenna, and higher cost.

An increasingly popular antenna design is the waveguide. The so-called cantennas are simple antennas for home-brew designers to build, which offer very high gain for relatively little effort. Waveguides most closely resemble plumbing, in that they are boxes or cans with nothing in them but a tiny radiator. Figure B-12 shows an ambitious design, made from extruded and milled aluminum.

The Pringles can and coffee can antennas are examples of simple (but effective) home-brew cylindrical waveguide antennas. A rectangular waveguide can behave like a sector or an omni, depending on how it is constructed.

In some ways, a dish is the opposite of an omni. Rather than try to cover a wide area, a dish focuses on a very tight space. Dishes typically have the highest gain and most directionality of any antenna. They are ideal for a point-to-point link, and nearly useless for anything else.

Figure B-13 shows a mesh antenna, although solid variations exist. Dishes come as small as 18" across or as big as you like (a 30-foot dish is possible, but probably not very convenient). A dish that can send an 802.11b/g signal more than 20 miles can be as small as a few feet across. In terms of gain for the buck, dishes are probably the cheapest type of antenna. Many people have been successful in converting old satellite and DSS dishes into 2.4 GHz dishes. Generally speaking, the difference between a mesh reflector and a solid reflector has little to do with gain, but is a consideration when mounting your dish, as solid dishes tend to pick up more load from the wind.

B.3.6. Putting It All Together

When trying to estimate what antennas will be required for a particular installation, I find it helpful to draw an overhead picture of the project site. Sketch out where you intend to install your equipment and where you expect your network clients to come from. Also include any obstacles (such as walls containing metal, or intervening buildings and trees on a long distance shot). This should help to determine your desired coverage area, as well as help suggest optimal placement of your access points and antennas. 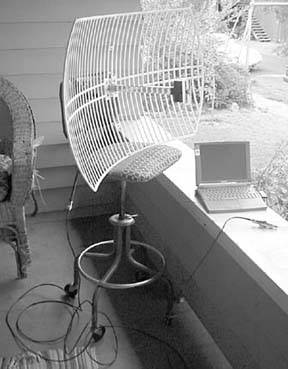 For example, if you are trying to cover a large office with obstacles in the center (such as an elevator shaft or bathrooms), access points at opposite ends of the room with sector antennas pointed inward might make more sense than a single AP in the center with an omni. On a long distance shot, it might make more sense to go around an intervening tree or building by adding an extra hop, rather than trying to shoot through it with high gain dishes. Knowing the approximate radiation pattern and gain of your antennas ahead of time will help to focus your energy in the direction that you intend to use it, so you can design the most efficient network possible.