Sift through network data with one of the most advanced protocol analyzers available.

Ethereal is one of the most popular protocol analyzers on the planet. It runs on all major platforms, including Linux, BSD, Mac OS X, and Windows. Like tcpdump [Hack #33], it can capture packets directly from a network interface, or analyze data from a previously saved file.

Linux users can install the ethereal and ethereal-gnome packages using your distribution's package manager. BSD users can get ethereal from the packages or ports repositories depending on your BSD flavor. The Ethereal web pages at http://www.ethereal.com/download.html provide installers for Windows and Solaris, pointers to binary installers for many other operating systems, as well as the source code should you feel inclined to do some compiling.

While capturing data, Ethereal can give you real-time statistics about which protocols are actively in use (Figure 2-33). Start capturing by selecting Capture

If you would like to see these statistics again, with even more detail, after you have finished capturing packets, go to Tools

Protocol Hierarchy Statistics. You can use this on previously captured dump files as well. If you already have some captured data you can simply click File

images/U2192.jpg border=0> Open…and select the file youd like to analyze.

Ethereal displays the data it has collected in three ways. The top part of the window shows a summary of the data, with one packet per line. This lists the sequence, time, IP data, protocol, and general description of the packet. The data can be sorted on any of these fields by clicking the field name at the top. Selecting one packet displays more information in the other two window areas. The middle part of the window shows a hierarchical dissection of the packet, including the Ethernet, IP, TCP, and other layers. This allows you to quickly "drill down" into the particular piece of the packet that you are interested in. The bottom portion of the window shows a hex dump of the actual packet. Bits of the packet are automatically highlighted by selecting parts of the packet in the middle section. For example, selecting the IP source address in the middle section highlights the corresponding 4 bytes in the hex dump at the bottom. 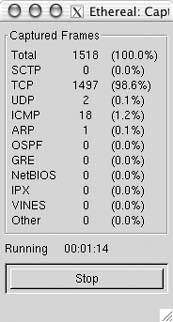 Figure 2-34 shows Ethereal's ability to dissect high-level protocols such as HTTP. Select an HTTP packet at the top, and open the Hypertext Transfer Protocol drop-down in the middle section. This shows the contents of the packet in plain ASCII.

Of course, most TCP conversations are spread across several packets. Ethereal reassembles the entire stream for you by selecting one packet and clicking Tools

It is difficult to tell in black and white, but the two conversations are actually displayed in different colors, making it simple to tell at a glance which side is speaking.

Speaking of colors, Ethereal can even display its packet data with color coding, defined by a rich pattern-matching language. This can make any data you are searching for leap out in bold red while showing everything else in pale gray, for example. It uses the same pattern-matching language to specify display filters, which unfortunately isn't the same language used by tcpdump. For an example of how to build a display filter in Ethereal, see "Track 802.11 Frames in Ethereal" [Hack #32]. 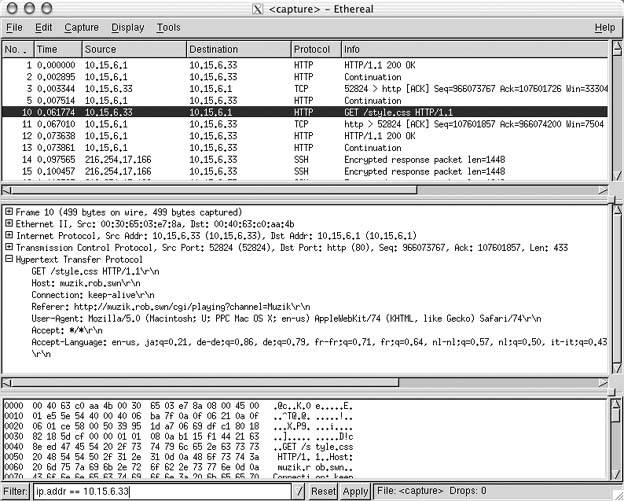 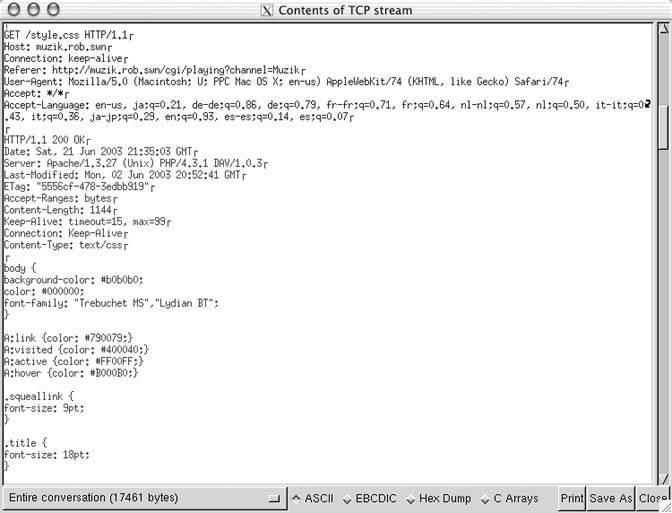 This is just a simple demonstration of Ethereal's basic features. It can show you as much detail as you care to know about the packets flying around on your wireless network, and is one of the most powerful tools available for tracking down network problems. See the documentation and example capture files at http://www.ethereal.com for some other creative uses for Ethereal.