Managing one AirPort Base Station is easy enough, but managing multiple stations can be an exercise in repetition. But it doesn't have to be.

At first glance, the ability to save and reload an AirPort Base Station's configuration might seem superfluous. After all, once the base station is configured, what's the point? Well, there's at least three that we can think of:

To save your configuration, open your base station in AirPort Admin Utility and go to File

Save a Copy As. This saves a file with the extension To upload a configuration to a base station, completely replacing its current configuration, go to the File

Import and select the 5.16.1. A Power Tool for Configuration Management

As nice as it is to be able to store and modify .baseconfig files for individual base stations, it's not the greatest solution for network administrators who need to take care of multiple base stations, especially when they need to update a particular setting across all of their base stations at once. In April 2004, Apple released a new tool, the AirPort Management Utility, to help manage networks with a number of base stations. You can download this tool as part of the AirPort Management Tools download located at http://www.apple.com/support/airport/.

AirPort Management Utility trades the hand-holding interface of AirPort Admin Utility for a power user's interface that gives you direct access to all of the tweakable properties of each base station, as shown in Figure 5-24.

Where AirPort Management Utility really shines is in its ability to edit the same property on more than one base station at once. For example, if you want to change the network name for multiple base stations on the local network, you can select the base stations and make a change to a single line, as shown in Figure 5-25. 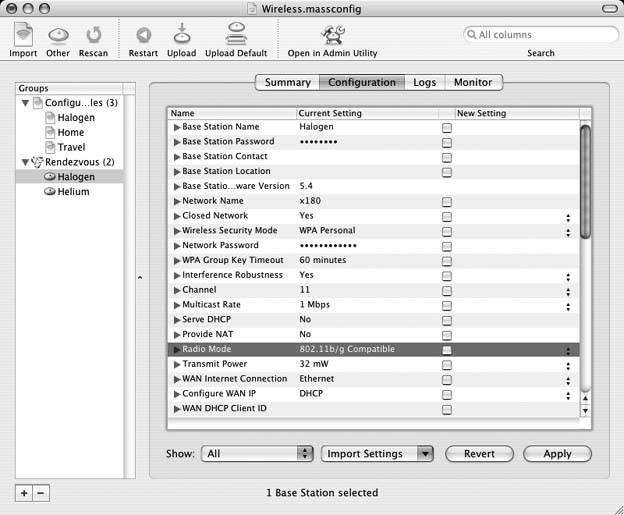 AirPort Management Utility will take care of updating the value on all of the base stations simultaneously.

5.16.2. Tweaking Placement of Base Stations

Another task that falls to administrators of wireless networks is the placement of base stations to best serve the machines for the network. Quite frankly, the signal strength meter on the menu bar leaves quite a bit to be desired as a tool to help get the best signal possible. Luckily, we now have the AirPort Client Monitor, another tool that comes as part of the AirPort Management Tools package. This tool not only reports signal strength much more accurately than the menu bar meter, but it also reports the noise on the connection, as well as the bandwidth available, as shown in Figure 5-26.

By using the AirPort Client Monitor, you can gather information about any computer and position it for best network performance. This tool fails, however, when you need to balance the position of a base station against multiple machines. Sure, you could run back and forth between Macs and see their signal strengths one at a time as you make adjustments. But that would be the proverbial pain in the rear, not to mention a major threat to the soles of your shoes. 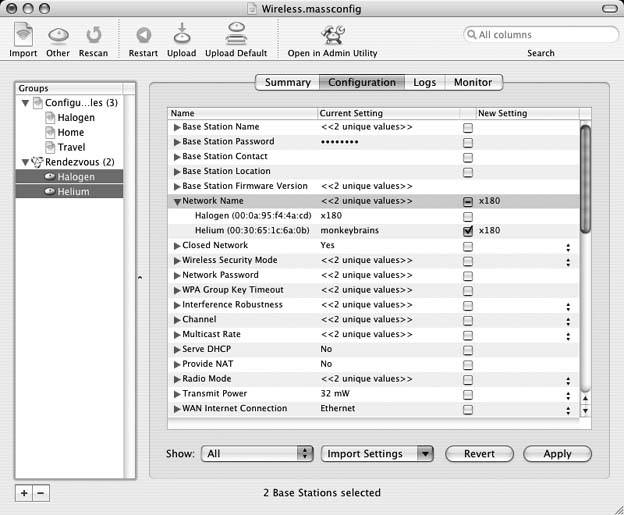 Never fear; your soles are safe. Simply fire up AirPort Management Utility, select a base station, and click on the Monitor tab. This produces a chart of the signal strengths of all of the computers that are using that base station, as shown in Figure 5-27.

The only thing needed from you is a translation of the AirPort IDs reported to the actual machines, but once you know which AirPort ID belongs to which machine, you'll be able to tweak the position of the computers and the base station to get the best signal possible to all machines.

Figure 5-26. Tracking the performance of an AirPort connection 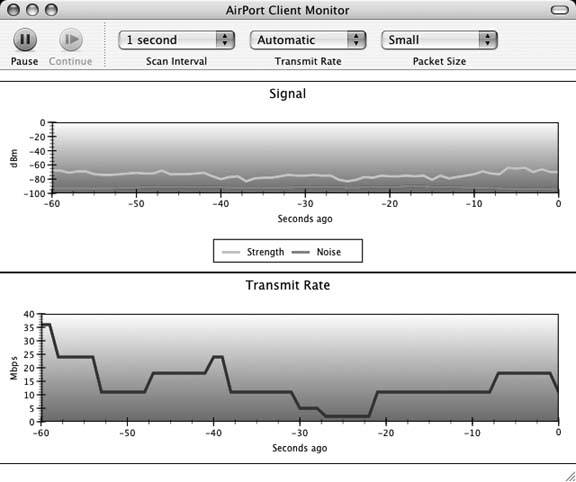