Here's how to make the infamous Pringles cantenna.

At the Portland Summit in June 2001, Andrew Clapp presented a novel yagi antenna design (http://www.aeonic.com/~clapp/wireless). It used a bolt, metal tubing, washers, and PVC tubing to make an inexpensive shotgun yagi, either 18" or 36" long. While his antenna shows between 12 and 15 dBi gain (which is impressive for such a simple design), it's also quite large. When we returned from Portland, some members of our local group realized that, if we were careful, we could fit a full wavelength inside of a Pringles can (see Figure 6-5). This would show a reduced total gain, but it would also make the entire antenna much more compact.

This now infamous hack takes about an hour to construct. Table 6-1 shows a list of the parts you need to get started.

Figure 6-5. The complete Pringles can antenna 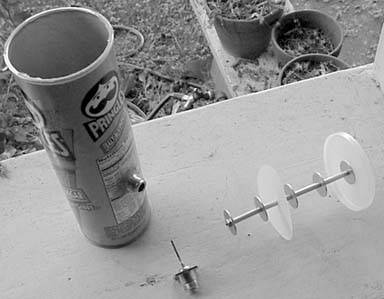 Of course, buying in bulk helps a lot. You probably won't be able to find a 6" piece of all-thread; buy the standard size (usually one or two feet) and a 10-pack of washers and nuts while you're at it. Then you'll have more than enough parts to make two antennas, all for about $10.

Mark and cut four pieces of tubing, about 1.2" (1 15/64"). Where did I get this number? First figure out the wavelength at the bottom of the frequency range we're using (2.412 GHz, or Channel One). This will be the longest that the pipe should be:

We'll be cutting the pipe to quarter wavelength, so:

Practically speaking, what's the difference between the shortest pipe and the longest pipe length? The answer is about 0.02" or less than 1/32". That's probably about the size of the pipe cutter blade you're using. So, just shoot for 1.2" and you'll get it close enough.

Cut the all-thread to exactly 5 5/8". The washers we used are about 1/16" thick, so that should leave just enough room for the pipe, washers, and nuts.

Pierce a hole in the center of the Pringles can lid big enough for the all-thread to pass through. Now is probably a good time to start eating Pringles.

Cut a 3" plastic disc, just big enough to fit snugly inside the can. We found that another Pringles lid, with the outer ridge trimmed off, works just fine. Poke a hole in the center of it, and slip it over one of the lengths of pipe.

Now, assemble the pipe. You might have to use a file or dremel tool to shave the tips of the thread, if you have trouble getting the nuts on. The pipe is a sandwich that goes on the all-thread like this:

You can see the collector assembly clearly in Figure 6-5. Tighten down the nuts to be snug, but don't overtighten (I bent the tubing on our first try; aluminum bends very easily). Just get it snug. Congratulations; you now you have the front collector.

By now, you should have eaten (or tossed) the actual chips. Wipe out the can, and measure 3 3/8" up from the bottom of the can. Cut a hole just big enough for the connector to pass through. We found through trial and error that this seems to be the sweet spot of the can. On our Pringles "Salt & Vinegar" can, the N connector sat directly between "Sodium" and "Protein."

Straighten the heavy copper wire and solder it to the connector. When inside the can, the wire should be just below its midpoint (ours turned out to be about 1 1/16"). You lose a few dB by going longer, so cut it just shy of the middle of the can.

We were in a hurry, so we used hot glue to hold the connector in place on our first antenna. If you have a connector that uses a nut and washer, and you're really careful about cutting the hole, these work very well (and aren't nearly as messy as hot glue). Just remember that you're screwing into cardboard when you connect your pigtail. It's easy to forget and accidentally tear the wall of the can.

Now, insert the collector assembly into the can and close the lid. The inside end of the pipe should not touch the copper element; it should be just forward of it. If it touches, your all-thread is probably too long.

How can you estimate gain without access to high-end radio analysis gear? Using the Link Test software that comes with the Orinoco Silver cards, you can see the signal and noise readings (in dB) of a received signal, as well as your test partner's reception of your signal. As I happen to live 0.6 mile (with clean line of sight) from O'Reilly headquarters, we had a fairly controlled test bed to experiment with. We shot at the omni on the roof and used the access point at O'Reilly as our link test partner.

To estimate antenna performance, we started by connecting commercial antennas of known gain and taking readings. Then, we connected our test antennas and compared the results. We had the following at our disposal:

Table 6-2 shows the average received signal and noise readings from each, in approximately the same physical position.

The test partner (AP side) signal results were virtually the same. Interestingly, even at only 0.6 mile, we saw some thermal fade effect; as the evening turned into night, we saw about a 3 dB gain across the board.

The Pringles can seemed to have large side lobes that extend about 45 degrees from the center of the can. Don't point the can directly at where you're trying to go; instead, aim slightly to the left or the right. We also found that elevating the antenna helped a bit as well. When aiming the antenna, hold it behind the connector, and slowly sweep from left to right, with the Link Test program running. When you get the maximum signal, slowly raise the end of the can to see whether it makes a difference. Go slowly, changing only one variable at a time.

Remember that the can is polarized, so match the phase of the antenna you're talking to (for example, if shooting at an omni, be sure the element is on the bottom or the top of the can; otherwise, you won't be able to see it). See [Hack #100] for how you can use this effect to your advantage.

We were fortunate enough to have a member of our community group bring a return loss meter to one of our meetings, and were able to get some actual measurements of how much signal was returning to the radio. The results weren't as good as I had hoped, but they showed that the antenna was usable, particularly at lower frequencies. Most likely, failing to take into account the thickness of the washers made the entire front element a little too long. There isn't nearly enough power leaving the radio to cause damage due to high return loss, but it does point out that the antenna isn't as well-tuned as it could be.