So you have the radio, an antenna, and a length of cable. How do you connect them together? You need to use connectors that work well in the 2.4 GHz range, fit the kind of cabling you're using, and mate with each other. Practically all common connectors have two halves, a male and a female (or a pin and a socket). A few of the more exotic types (such as the APC-7; see later in this section) are sexless, so any connector will match up with any other. Here are the most common connectors you are likely to encounter in the microwave bestiary.

The BNC (Bayonet Neill Concelman) connector, as shown in Figure B-1, is a small, cheap connector using a quick-connect half turn (the same connector found on 10base2 Ethernet). The BNC isn't well suited for 2.4 GHz use, but is mentioned here because, with the death of 10base2, the connectors are frequently sold for pennies per pound. Don't be tempted. 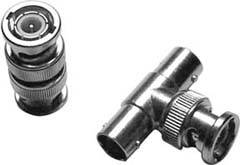 The TNC (Figure B-2) is a threaded version of the BNC. The fine threads help eliminate leakage at microwave frequencies. TNCs work well all the way through 12 GHz, and are usually used with smaller (and higher-loss) cable.

An N (Neill) connector (Figure B-3) is a larger, threaded connector found on many commercial 2.4 GHz antennas. It is much larger than the TNC. It works very well on thicker cable (such as LMR-400) and operates well up to 10 GHz. The N is probably the most commonly encountered connector when dealing with 802.11b/g-compatible gear.

The connector commonly referred to as a "UHF" connector looks like a coarse-thread version of the N (Figure B-4). It is not usable for 2.4 GHz, but is sometimes confused with the N. According to the ARRL Microwave manual, it's a PL-259 (which mates with the SO-239 socket). It's not designed to work at microwave frequencies. Avoid this connector. 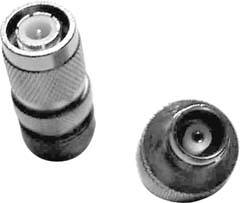 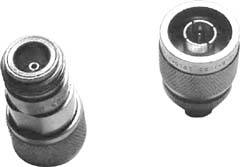 SMA (Sub-Miniature, variation A) connectors (Figure B-5) are very popular, small, threaded connectors that work great through 18 GHz. Their small size precludes using them with large, low-loss cable without using a pigtail.

The SMB (Figure B-6) is a quick-connect version of the SMC.

The SMC (Figure B-7) is a very small version of the SMA. It is designed to work well through 10 GHz, but accepts only very small cables.

The APC-7 (Amphenol Precision) connector, as shown in Figure B-8, is a 7mm sexless connector, usable through 18 GHz. It is a high grade connector manufactured by Amphenol, and is expensive, fairly rare, and very low loss.

Figure B-4. The so-called "UHF" connector 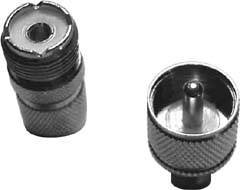 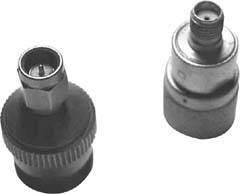 Remember that each connector in the system introduces some loss. Avoid adapters and unnecessary connectors whenever possible. Also, commercially built cables tend to be of higher quality than cables you terminate yourself (unless you're really good and have the right tools). Whenever possible, try to buy a pre-made cable with the proper connectors already attached, at the shortest length you can stand. 802.11b gear doesn't put out much power, and every little bit helps extend your range and reliability. It's very easy to make a bad cable, and bad cables can cause no end of trouble.

When matching cables to your equipment, you may encounter connectors of reverse gender (sometimes called "reverse polarity," or male and female ends swapped with the same threads), reverse threading (lefthand instead of righthand thread), or even reverse gender reverse threading (both). For example, the popular WAP11 uses an RP-TNC. Make sure you know what you're getting before you order parts online! 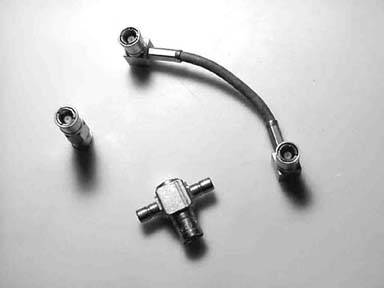