A tier -1 automotive supplier was in the process of expanding one of its manufacturing plants. To support higher levels of production in the expanded plant, four new extrusion lines were going to be added (taking the number of lines from three to seven). Large reductions in work-in-process inventory were required to facilitate this expansion (due to floor space limitations and working capital constraints). Additionally, the ability to mold extruded rubber parts decreases as the parts age, with the secondary molding operations experiencing higher rates of scrap the longer the extrudate ages. The plant also wished to develop a scheduling process that would allow for easy scheduling of the larger department and improved flow between operations. The manual scheduling system used previously was no longer viable , and management did not want to add any more indirect scheduling labor.

The plant decided to implement a kanban system to schedule production and control WIP inventory levels. They followed the Seven Steps for Implementing Kanban, as described in Chapter 1.

Since data already existed for extrusion line 1, this line was chosen for the first kanban. Scrap, changeover times, line speed, and downtime data for the previous three months were available, as well as production estimates for the next three months.

In this step, the production requirements, scrap rates (for both extrusion and the secondary operations), line speed, downtime, and changeover time were used to calculate a replenishment interval. The kanban team followed the same process that was described in Chapter 4. Figure I-1 shows the results of these calculations (note that some of the data has been hidden to protect confidential company information).

In designing the kanban, the plant had several priorities. First, they wanted the kanban to be visual and simple to operate . They also wanted the production workers on the line to schedule their own production. And with fourteen different parts being run on the extrusion line, they did not want to use kanban cards, which they felt would be likely to get lost or destroyed . They decided to design a magnetic kanban board that would be located at the end of the extrusion line (see Figure I-2). 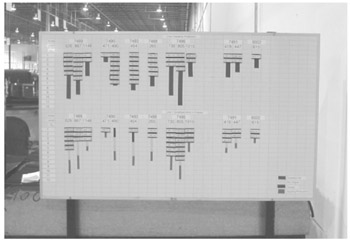 The team designed a magnetic board with two sections: the bottom portion, which showed completed buggies, and the top portion, which showed buggies left to produce (see Figure I-4). Each part number was given a column with the allowed number of kanban buggies marked on it. On the scheduling half of the board, colored zones were marked (red, yellow, and green). On the top half of the board, the area equating to the maximum number of kanbans allowed was marked off to provide a visual check if any magnets are missing. (If all of the production kanbans have been used, and the top portion of the board is not full, some magnets must be missing.) 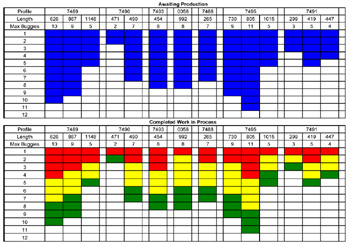 The team developed a detailed set of rules that explained how the kanban was going to operate. The rules were simple and specific, detailing exactly who was to do what, and when (see Figure I-5 for details). Basically, when a buggy was filled, the line operators moved a magnet from the scheduling portion of the board to the inventory portion of the board. When they ran out of kanban magnets for the parts they were running, they changed over to the next part. The board was designed to run from left-to-right , reflecting the desired operating sequence. The sequence was selected to reduce change-over time and scrap. Thus, for any given part, the part immediately to its right was the most similar in terms of line settings and materials. If you proceeded to the part to the right of the current part, you minimized change over time. Using the rules, the operators were able to schedule their own line and control the WIP inventory without leaving their workstations.

When a material handler removed a buggy of material from the extrusion line and took it to a secondary customer, he simply stopped his forklift in front of the kanban board and moved the appropriate magnet from the top inventory portion of the board to the bottom production-scheduling portion. Thus, the operator received a real-time signal of the production status of all of the parts run on the line (simply by seeing the red-yellow-green status of each part). Additionally, the top inventory portion of the board always displayed the current inventory level for each part.

Once the system was designed, everyone involved was trained. The training involved all of the extrusion line operators, as well as all extrusion supervisors and the materials handlers. The training involved a simple presentation demonstrating the functioning of the board. Special attention was paid to training every individual on his or her specific role. This is a critical step. Understanding the way the entire system works is important for buy-in, but each individual understanding his or her role is critical to actually making the kanban work. The group was also taken through what-if scenarios that described the kinds of situations they were going to face. This step helped the associates demonstrate their understanding of the system (while not feeling the pressure to say they understood even if they did not).

Once the training was completed, the kanban was started. All the rules and signs were posted, and the old scheduling system was stopped. The old daily schedules used by the line were not produced, so they had no scheduling information except that given by the board. As a precaution, the inventory level was taken to the maximum allowed by the kanban board before the implementation began . This provided a little cushion in case problems were encountered during the transition.

Step 6 Audit and Maintain the Kanban

The department scheduler was assigned the task of auditing the kanban each week. Figure I-6 shows the actual kanban audit sheet she developed. This sheet forced a reconciliation of actual inventory with the magnets on the kanban board. When problems were found, they were addressed and retraining was conducted . 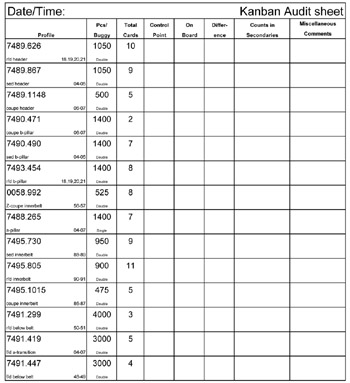 Once the kanban had been running smoothly for two months, the quantities on the board were reduced. This was accomplished by monitoring how many of the different part numbers were staying in the green zone. This number was determined to be too high, which indicated that there was room to reduce inventories even further. The number of buggies in the loop was decreased by 21 percent, from 136 buggies to 108 (see Figure I-7). Five other parts were marked for possible future inventory reductions. The designers recognized the need to be careful not to reduce inventories too fast, which risked problems developing and people losing confidence in the kanban system.

Three months after the kanban was implemented, an inventory was taken in order to document the actual, sustained inventory reductions achieved. The results are documented in Figure I-8. The inventory level was $82,604 before kanban implementation, consisting of 106 buggies of product taking up 1,060 square feet of storage space.

After full implementation, the inventory level was $47,518, consisting of 56 buggies of product taking up 560 square feet of floor space. (See Figures I-9 and I-10 for illustrations of a buggy and of the floor space freed up due to kanban-driven inventory reductions.) Thus, in a span of three months, WIP was reduced by 42 percent, $35,086 in working capital was freed up, and 560 square feet of floor space was opened up for alternative uses (such as new business). 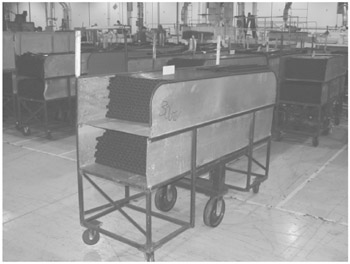 Example of the 50 buggies of inventory eliminated by the kanban. 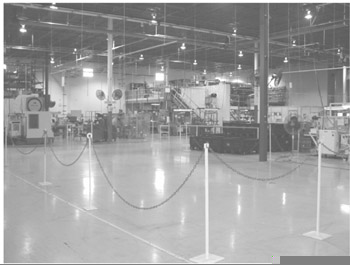 Kanban for the Shopfloor (Shopfloor Series)

Kanban for the Shopfloor Learning Package: Kanban Just-in Time at Toyota: Management Begins at the Workplace