Design falls into two very broad categoriesrealistic and stylizedwith a lot of gray area in between. Realistic designs mimic nature as closely as possible, while stylized designs caricature reality. Your decisions about how realistic you want your characters to be will affect every part of the filmmaking process.

If you want to create characters that closely mimic reality, then digital animation is certainly the medium you should choose. Feature-film animators and special effects teams can create characters and creatures that look completely real and integrate them into live-action environments.

Realism, however, comes with a price tag. The rule of thumb is that the more realistic something is, the more difficult it will be to animate. This is particularly true for realistic humans. Audience members interact with people every day and are experts in human behavior, so they will pick up on anything even slightly "off" about a realistic human character. While you might be able to get away with realistic humans in crowd scenes and as virtual stuntmen without a lot of extra effort, the more screen time the characters get, the more work you'll have to do to sell a realistic character to the audience.

When considering realism, make sure you don't bite off more than you can chew. Nothing looks creepier to an audience than a realistic character that doesn't move realistically; that last 10 percent of realism takes more than 90 percent of the effort.

Getting a still 3D model to look real is a much different task than getting the same model to move convincingly. 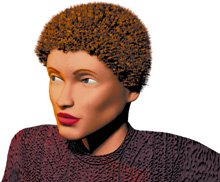 Stylizing a character avoids some of the problems involved with realism. If a character doesn't look completely photorealistic, the audience will be more willing to accept unrealistic movement and expression. This gives you the opportunity to write your own rules for the character and the world.

A good example of stylized designs can be drawn from the classic cartoons of the 1940s. Daffy Duck hardly looks like a real duck, but he's certainly a very real character. Daffy moves in a very stylized way, and his body can stretch to cartoon extremes, but the audience accepts these wild motions because that's how Daffy's world works.

3D animation can certainly mimic reality, but animation is always at its best when it creates its own reality. A caricatured design, however, is not a license to animate your characters poorly. Good animation will make even the simplest character seem to live and breathe.

This stylized dog doesn't really look like a canine, but the audience will accept it.

Stylized doesn't have to mean cartoony. A creature for a science fiction movie may look photorealistic, but is stylized in its own way. Even if the designer is inspired by nature, the end result is a new, stylized version of reality. This is the gray area between stylization and reality. Since the audience has never seenz this creature, you can decide how it will behavebut if the character looks realistic, its behavior should feel correspondingly realistic to the audience.

Cartoony characters can squash and stretch to extremes without losing audience acceptance. 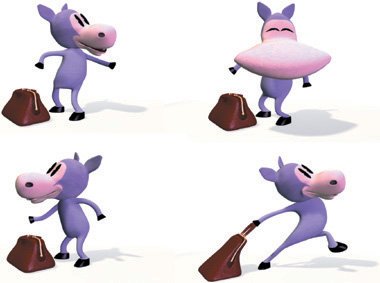