Now that you understand the underlying mechanics of walking, you can attempt to animate a walk. You'll need to understand how the walk is timed as well as the length of your character's stride. The mood and demeanor of the character will affect the style of the walk as well.

The first thing you need to concern yourself with is the timing of the walk. How many frames does a step take? That's not an easy question to answer, because you'll have to make a series of other decisions about your character. Is your character large and lumbering, or small and scrappy? Is your character running or walking? Happy or sad? All these factors determine the amount of time it takes your character to take a step.

At a normal walking gait, a step takes anywhere from one-third to two-thirds of a second, (8 to 16 frames at 24 fps, or 10 to 20 frames at 30 fps), with a half second per step being about average. A full cycle (both right and left steps) takes about a second per cycle. Larger characters tend to walk slower, and smaller characters walk faster. In general, men have slightly slower gaits than women, and sad people walk more slowly than happy people.

One nice thing about working with a computer is that many programs enable you to scale the length of your animation. If your character is walking too slowly, you can speed him up a bit by reworking the keys.

In a basic walk, the length of the legs and the speed of the walk will determine your character's stride. Generally, the faster a character walks, the longer the step. When animating a walk, the first pose you'll want to create is the extended position, where the legs transfer the weight from one leg to another.

The best way to create a walk is by working from the extreme poses and filling in the middle. You should create the two extended poses first, and then create the passing pose in the middle of these. Additional poses are created in between the extended and passing positions.

A character can take shorter steps if the mood calls for it.

When animating a walk, the first pose created is usually the extended position.

This extended pose is then mirrored with the opposite foot forward.

In the middle of these two poses, we create the passing position in which the free foot passes the supporting leg.

Halfway between the first extended position and passing position, we create a recoil, where the forward leg absorbs the weight of the body.

Looking at the way the body moves, we notice that the hips follow an up and down motion.

Once you've animated the basic leg movements, the next step is to create the upper body poses. The arms and shoulders mirror the motion of the hips and legs. When the right leg is forward, the right arm is back. The best way to create these poses is to use the same process as the legsstart with the extended positions and then do a middle pose. The arm motion drags behind the motion of the legs by a few frames, and always follows an arc.

Because walking is a cyclical motion, it may behoove you to create the walking motion as a cycle rather than as straight-ahead animation. If done properly, a cycle can save a great deal of time. One cycle can be applied to a number of different environments. Your character and his cycle can be placed just as easily in a cityscape as on a country road, because the walk motion is essentially the same. Why duplicate your efforts? Classical animators use this trick a lot, simply repeating the same sequence of drawings and swapping only the background painting, placing the character in a different location. In 3D, you have the flexibility to change the cameras, lighting, and environment to make the shot look completely different.

Those who work in the interactive and gaming industries deal with cycles every day. Most game engines require that you animate your characters in cycles, which are then called up as the player uses the game controls. In these cases, you may also need little animations to bridge the gap between cyclesbetween a walk and a run, for example.

When the right leg is forward, the right arm is back.

As the arm sweeps forward, it follows an arc.

As the arm moves back, it will tend to bend at the elbow.

There are two downsides to using cycles. First, because the cycle is repetitive, it can seem sterile and flat, particularly when viewed for an extended period of time. Second, cycles work best on level terrain. If your character has to walk around a corner or over a hill, the cycle might not match up properly.

Animating a cycle is similar to making your character walk on a treadmill. The body does not move forward; the feet simply move beneath it. To maintain the illusion of walking, the entire character must be moved across the ground (or the ground moved past the character) at the exact same rate that the feet are moving. Otherwise, the character's feet appear to slip. Also, the foot on the ground needs to move the exact same distance on each frame. Again, if the length of the steps varies, the feet appear to slip.

When you're animating multiple characters, it's always tempting to make them walk at the same rate to simplify the animation processbut it's not a good idea. Giving your characters the same gait makes them look as though they're marching in unison, which can detract from the shot. It's always best to stagger walk cycles and to give characters different gaits. If one character is walking at 12 frames per step, give the other a gait that's slightly slower or faster, maybe 10 frames per step or 15. By mixing it up, you make your shots more varied and interesting.

This "multiple exposure" of a walk cycle shows that the body does not move forward; instead, the feet move beneath it. The red marks show how the foot on the ground moves the exact same distance on each frame to prevent the appearance of slipping. 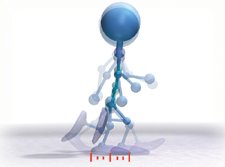