A character's design will depend largely on the character's personality and its role in the film. A character that is big and mean might have broad shoulders and beady eyes; a character with big eyes and a potbelly will seem meek in comparison. The relative proportions of your characters can tell the audience a lot about them.

Perhaps the most important proportion in a character design is the ratio of the head to the body. An average adult human is seven to eight heads tall, while an infant may be only a few heads tall. If the character is taller than average, it may look more lithe, graceful, or powerful, like a fashion model or superhero.

Stylized characters can have larger heads in relation to their bodies. One reason their heads are often larger is that the head and face communicate a lot of information about the character's mood and personality, and a bigger head makes these features more readable to the audience.

A realistic human stands about 7 to 8 heads tall. Exaggerated characters, such as bodybuilders, superheroes, and fashion models, may be as many as 9 or 10 heads tall. A stylized human usually has a slightly exaggerated head, making the character 4 to 5 heads tall. This makes the face bigger and more readable. A highly stylized character may have a head that's almost as big as its body.

The face is the very center of your character, and a good design will instantly tell the audience who the character is and what the character is feeling. Faces can take on a huge variety of shapes, and achieving this flexibility is a formidable design task as well as a technical and modeling challenge.

Make sure your character has enough room for the features to move around within the face. Some characters have an expression fixed on their faces; if your character is perpetually sunny or grumpy, don't hesitate to put this into the design.

The eyes are the windows to the soul, and your character's eyes will give the audience a lot of information. Because eyes are so important, many designers make them quite large so the audience can see them more clearly. This is particularly true in genres like anime, in which the eyes can take up almost half the head. The size of the eyes in relation to the face also gives clues to the character's personality. Typically, larger eyes are cuter and more childlike, whereas small, beady eyes may indicate a villain.

Eyes express emotion mainly through the lids, which can narrow or widen to change the shape of the eyes. Many characters have eyes modeled as part of the face, but some use "clamshell" lids: essentially half-spheres used much like a puppet's eyes. Other characters simply use replacement animation, in which different expressions are swapped in as needed, to create the eyes.

Animal eyes can be tricky to design because many animals have eyes on the side of their head. This can make the animation task of conveying emotion difficult because the audience can see only one eye at a time. Many designers stylize animal eyes by "humanizing" them and moving them toward the front of the face.

The eyes on the left use clamshell lids, which are easy to construct and animate but not as realistic as the lids on the right, which are part of the face.

This simple set of eyes can squash and stretch for more cartoony effects.

In the real world, many animals have eyes on the side of their head, such as the fish on the left. To design eyes that are more expressive, move them toward the front to "humanize" them. 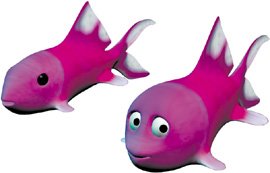 A character's brows work in concert with the eyes to convey emotion. Raising the brows might indicate surprise, while lowering them might indicate anger. Creating good brow motion is very important, and your design will affect the way your brows work.

Realistic character designs model the brow as part of the surface of the face. To manipulate the brows, a modeler may need to create a number of different shapes or "morph targets" that can be blended or morphed together to create animation. Other characters use design to work around this complexity, creating cartoon brows that float on the surface of the faceor, in extreme cases, float above it.

Realistic eyebrows are modeled as part of the surface of the face.

The mouth can be highly expressive and take on a huge variety of shapes, so proper design is very important. Most characters have mouths that are integral to the surface of the face. As with eyes and brows, this makes the creation of proper shapes and morph targets a significant modeling task. Some characters sidestep this issue and use replacement animation for the mouths, which isn't realistic but can lend the project a stop-motion feel.

Stylized brows can be modeled as separate geometry that floats on the surface of the face.

Extremely stylized brows don't even have to be attached to the face. 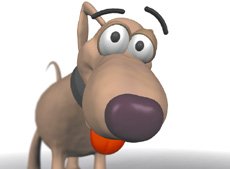 Mouths can take a wide variety of shapes. Be sure to plan for this when designing.

Some animators use replacement mouths that simply replace the character's entire mouth, a technique used frequently in stop-motion, cut-out, and clay animation.

Outside of the face, the hands are probably the most expressive part of the body. Many characters gesture a lot with their hands, and a well-designed hand will allow your character to express itself more clearly. As with heads, you can use slightly oversized hands on a stylized character for a cartoony look. If your design is more realistic, you'll want to proportion the hands realistically as well.

Here we have a character whose hand and body are one seamless mesh.

One challenge with hands is attaching the hand to the arm or the wrist. This is an extremely flexible joint, and proper deformations can be tricky. A long sleeve or wristband can be used to hide a seam, which allows you to create the hand separately and avoid this technical problem.

If you want, you can give your character cartoon gloves for hands. In the 1920s and '30s, animators found that white gloves made their characters' hands easier to see and therefore more expressive. For a 3D animator, cartoon gloves can serve the same purpose, while also hiding a telltale seam.

This character hides the seam under the sleeve, which may simplify deformation and rigging of the character.

Many characters are built using a single mesh. Although this is a natural way to create a character, it forces you to deform every part of the mesh when you animate the character. Mesh deformation is always a little problematic and can be resource-intensive, so sometimes breaking your character into manageable parts can simplify the rigging and animation process. It's very easy to design collars, clothing, and other accessories to help hide seams for your characters.

Some characters are designed from the ground up as segmented characters. A character such as a robot would actually be built with body parts as individual objects and might not even need mesh deformation at the joints. This makes the setup and rigging of the character very straightforward.

A cartoon glove is stylish, and it helps you design around the tricky problem of seamlessly attaching your character's hand to the wrist.

A segmented character like this robot is built out of individual parts, eliminating the need for mesh deformation. 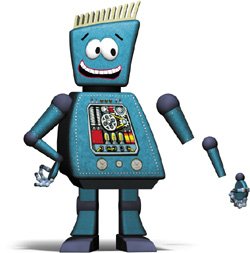 Even organic meshes can be segmented. A neck can be hidden under a collar, while clothing can hide other joints.