The face is a very complex surface that can assume a huge variety of shapes. Facial animation is probably the most difficult task an animator faces, and having a good rig will help the process along considerably.

While tools such as wire deformers, bones, and clusters have been used for facial animation, the most popular method by far is a process called morphing, which allows one object to assume the shape of another. Since the face is so complicated, it is best to sculpt the individual poses a character's face may take. This allows for precise control of the specific shapes. A morphing utility will allow you to smoothly animate between these shapes.

Multiple-target morphing lets you mix and blend multiple shapes to create new shapes. In facial animation, this provides even greater control over the shape of the face, because it allows you to mix and blend shapes representing the extremes in any ratio or combination.

Morphing allows you to take two or more shapes and combine them. 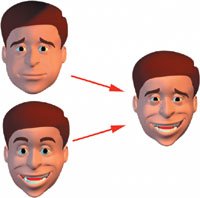 Most 3D packages provide a slider-based interface to control the weights of the individual morphs.

The best way to model morph targets for animation is to study the underlying anatomy of the face. Since each muscle is connected to the face in a specific place, flexing just that muscle will change the shape of only part of the face. If you model the exact shape that one muscle would create when tensed, you will have an anatomically correct animation, once all of the shapes and hence all of the muscles are mixed together.

Ideally, you could model targets for every single muscle in the face, which amounts to several dozen targets. For ease of use, this book will outline a dozen or so of the most useful shapes. While some of these poses combine several muscles, the theory is the same: each slider controls only part of the face. ("Slider" is a generic term for an object or interface element that, when manipulated, controls another object.)

When modeling for a morph system, be careful to move only those vertices that need to be affected by any particular muscle. If, for example, you accidentally move a vertex on the ear while working on a mouth motion, the character's ear may change shape every time the jaw opens. Also be sure to make smooth transitions from the right to left sides of the face. When you model a right-side smile, make sure that the smile transitions smoothly to the left side of the face, and vice versa. If the same part of the face is manipulated by more than one slider, you may get unwanted results, like a top lip that goes bonkers when both smile sliders are moved.

These target poses are extremes, so try to model the biggest smile, the saddest frown, and so on. Try looking in the mirror and using your own face as a reference.

For almost any character, you'll need to model a number of basic facial poses. These poses are fundamental to proper facial animation and are based on the motion of the major muscles of the face. In addition to the basic poses, you can create additional poses to help speed animation.

This first pose is the open jaw. Model it by selecting the vertices of the lower face and then moving them down and slightly back to simulate the effect of the jaw rotating open. The pursed lip, or "oooh" shape is the product of the orbicularis oris muscle. When you model this shape, be sure to maintain volume in the lips, which get slightly thicker as the muscle contracts.

Smiles are primarily the action of the zygomatic major muscle. In a smile, the corner of the mouth is pulled up into the cheek, which creates a smile line and expands the volume of the cheek.

This frown is a combination of the triangularis and depressor labii inferioris muscles. These muscles pull the corner of the mouth down.

The depressor anguli oris muscle pulls the mouth out to express disgust or fear. When tightened, this muscle can also affect the tendons in the neck. Again, separating this into right and left will give you more options when animating.

The sneer is the product of the levator labii superioris muscle. It pulls the lip up toward the edge of the nose. It also affects the skin along the side of the nose all the way up to the corner of the eye.

While many animators concentrate on the mouth and lip sync, true emotion is communicated through the eyes, brows, and upper face. Good upper-face animation is critical to any facial animation.

The corrugator pulls the brow down and in toward the bridge of the nose. In an extreme position, the character looks angry, though this shape is also used for many other emotions.

The left and right eyebrows are lifted by the frontalis. Model each brow separately to achieve maximum control.

Another pose to model is worry, with the brow furrowed and the eyebrows down.

For the eyes, blinks are always important.

Creating an extra pose for the lower lids can help with squinting and other actions.

It also helps to make a pose in which the eyes widen.

You can create all sorts of other poses to get very specific expressions. You'd usually create these poses as needed and for specific scenes or situations.

The number of facial poses can add up very quickly. 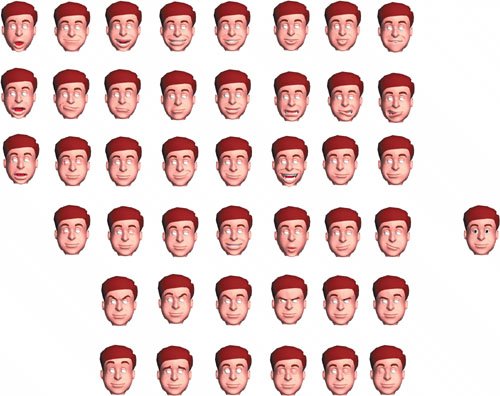