The common objective is to establish a high level of confidence in the configuration documentation used as the basis for configuration control and support of the product throughout its life cycle. Configuration verification should be an imbedded function of the process for creating and modifying the CI or CSCI.

As shown in Figure 8.1, inputs to the configuration verification and audit activity include: 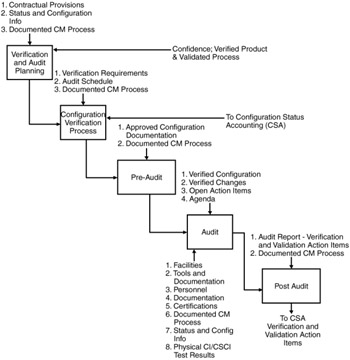 Successful completion of verification and audit activities results in a verified system/CI(s) and a documentation set that can be confidently considered a product baseline. It also results in a validated process to maintain the continuing consistency of product to documentation. Appendices V and W provide sample checklists for performing both a functional configuration and physical configuration audit.

Configuration verification is a process that is common to configuration management, systems engineering, design engineering, manufacturing, and quality assurance. It is the means by which a developer verifies his or her design solution. 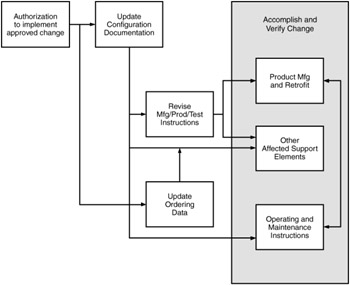 Change verification may involve a detailed audit, a series of tests, a validation of operation, maintenance, installation, or modification instructions, or a simple inspection. The choice of the appropriate method depends on the nature of the CI, the complexity of the change, and the support commodities that the change impacts.

For complex systems and CIs, a "performance" audit is necessary to make this determination. Also, because development of an item involves the generation of product documentation, it is prudent to ascertain that the documentation is an accurate representation of the design being delivered.

Configuration audits provide the framework, and the detailed requirements, for verifying that the development effort has successfully achieved all the requirements specified in the configuration baselines. If there are any problems, it is the auditing activity's responsibility to ensure that all action items are identified, addressed, and closed out before the design activity can be deemed to have successfully fulfilled the requirements.

There are three phases to the audit process, and each is very important. The pre-audit part of the process sets the schedule, agenda, facilities, and rules of conduct and identifies the participants for the audit. The actual audit itself is the second phase; and the third phase is the post-audit phase, in which diligent follow-up of the audit action items must take place. For complex products, the configuration audit process may be a series of sequential/parallel audits of various CIs conducted over a period of time to verify all relevant elements in the system product structure. Audit of a CI can include incremental audits of lower-level items to assess the degree of achievement of requirements defined in specifications/documentation.

Application of Audits During Life Cycle

It is extremely unlikely that FCAs or PCAs will be accomplished during the Concept Exploration and Definition phase or the Program Definition and Risk Reduction phase of the life cycle. Audits are intended to address the acceptability of a final, production-ready design and that is hardly the case for any design developed this early in the life cycle.

It is during the Engineering and Manufacturing Development (EMD) phase that the final, production, operationally ready design is developed. Thus, this phase is normally the focus for the auditing activity. A PCA will be preformed for each HW CI that has completed the FCA process to "lock down" the detail design by establishing a product baseline. Hardware CIs built during this phase are sometimes "pre-production prototypes " and are not necessarily representative of the production hardware. Therefore, it is very common for the PCAs to be delayed until early in the Production phase of the program.

Because the final tested software design verified at the FCA normally becomes the production design, the PCAs for CSCIs are normally included as a part of the SOW tasking for the EMD phase. CSCI FCAs and PCAs can be conducted simultaneously to conserve resources and to shorten schedules.

During a PCA, the deliverable item (hardware or software) is compared to the product configuration documentation to ensure that the documentation matches the design. This ensures that the exact design that will require support is documented. The intent is that an exact record of the configuration will be maintained as various repair and modification actions are completed. The basic goal is sometimes compromised in the actual operation and maintenance environment. Expediency, unauthorized changes, cannibalization, overwork, failure to complete paperwork, and carelessness can cause the record of the configuration of operational software or hardware to become inaccurate. In some situations, a unit cannot be maintained or modified until its configuration is determined. In these kinds of circumstances, it is often necessary to inspect the unit against approved product configuration documentation, as in a PCA, to determine where differences exist. Then the unit can be brought back into conformance with the documentation, or the records corrected to reflect the actual unit configuration.

Audit checklists are provided in Table 8.1.

Testing is a critical component of software engineering. It is the final step taken prior to deploying the system. Configuration Verification and Audit organizes this process to ensure that the deployed system is as expected by the end users.

This chapter is based on the following report: MIL-HDBK-61A(SE), February 7, 2001 , Military Handbook: Configuration Management Guidance .