The performance improvementsin speed, cost, and capacityof fiber have been fast and furious. The number of bits per second that fiber can carry doubles every 9 months for every dollar spent on the technology. The number of bits per second per lambda (λ), or wavelength, doubles every 12 months. The cost of transmitting a bit of information optically drops by 50% every 9 months, and fiber prices, on a per-megabits-per-second basis, are falling by 60% each year. In comparison, the number of transistors on a computer chip doubles only every 18 months. Therefore, over a 5-year period, optical technology far outpaces silicon chips and data storage. New fiber networks are increasing long-distance transmission capacity incredibly quickly and relatively inexpensively.

The following sections discuss the factors driving the optical networking boom, what today's networks actually look like, and the abundance of bandwidth.

A number of factors are driving the interest in and deployment of optical networking. First, carriers want to boost capacity by orders of magnitude. Dense Wavelength Division Multiplexing (DWDM) enables multiple wavelengths of light to be carried over a single strand of fiber, which allows for the elegant expansion of capacity. We're also seeing developments in the application of Frequency Division Multiplexing (FDM) to WDM systems, whereby we can combine more streams of traffic onto the same wavelength, promising a several-fold boost to the carrying capacity of fiber. (DWDM, FDM, and other multiplexing techniques are discussed in Chapter 1, "Telecommunications Technology Fundamentals.") Thus, we can extract more wavelengths, and over each wavelength we can derive more channels, and on each channel we can achieve more bits per second.

Second, carriers want to slash costs. Advances are being made in eliminating the need for regeneration stations on long-haul networks. Because many optical networks still use electronic repeaters, every 200 miles (320 km) a light signal has to be converted back into an electrical signal in order to be reshaped, resynchronized, and retimed. Then the signal is again converted back into a light pulse. This process accounts for about half the cost of optical networking. Advances in optical amplifiers, solitons (laser pulses that retain their shape in a fiber over long distances), and optical add/drop multiplexers (OADMs) and cross-connects (which eliminate the need for any conversions for signals passing through the nodes) are vastly improving the performance of optical infrastructures while also reducing the costs of deployment and ongoing operation.

Third, the provisioning of services needs to occur in minutes. But at this point, a carrier may have to wait six to nine months for an OC-3 (i.e., 155Mbps) circuit to be provisioned. Optical switches will automate the provisioning process while also boosting capacities to handle thousands of wavelengths; that is the promise of end-to-end optical networking.

As described in Chapter 2, "Traditional Transmission Media," today's networks maintain mostly separate electronic connections for voice and data (see Figure 11.1). They achieve reliability in the network by using dual-counter-rotating rings based on the SDH/SONET communications standard (which is discussed in Chapter 4, "The PSTN"). With dual-counter-rotating rings, traffic normally flows in a clockwise direction over the primary fiber. A protect fiber is designed to carry traffic in a counterclockwise direction. An SDH/SONET multiplexer aggregates traffic onto the rings. If the primary link is cut, traffic is switched to the protect fiber very quicklyin about 50 milliseconds. This ensures a high degree of network survivability, and it is a major strength of SDH/SONET. The first generations of WDM equipment did not address network restoration, but newer equipment now possesses such features as well. 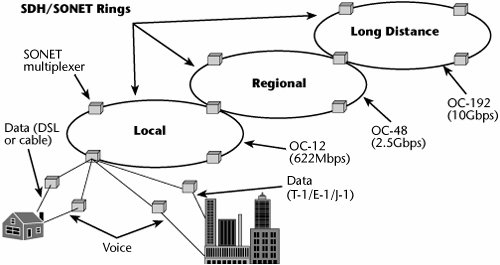 Optical networks in the near future will channel all traffic over a single fiber connection and will provide redundancy by using the Internet's mesh of interlocking pathways. When a line breaks, traffic can flow down a number of different pathways. Optical switching will become the foundation for building these types of integrated networks (see Figure 11.2). 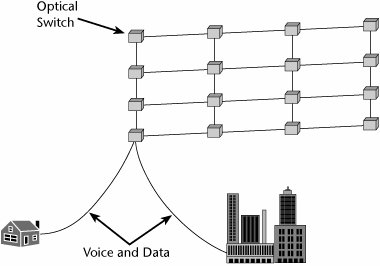 Today's network reality involves a complex layering of many different architectures and their individual control planes. As shown in Figure 11.3, today's network has many layers of packet data networksincluding IP, Frame Relay, ATM, and MPLSall operating over mesh topologies. These packet networks sit on top of SDH/SONET rings. The rings themselves are stacked, addressing the specific requirements of access networks, metro networks, or core networks. They facilitate fast restoration in the event of failure, but adding capacity is an intensive manual process. The SDH/SONET rings further sit on top of DWDM networks, which are point-to-point systems that involve link-by-link management and massive traffic connections at the tandem offices. The management and traffic problems will get worse as systems grow in capacity. Today's systems carry 160 wavelengths or more, and at 10Gbps per wavelength, a 160-wavelength system offers 1.6Tbps of traffic; the capacitiesthat is, the number of wavelengths and bits per second per wavelengthare increasing every year.

Multiple packet data networks run over SDH/SONET, which runs over DWDM. Packet networks are naturally resilient. Therefore, the cost of overbuilding SDH/SONET may not be justified. Some services still expect 50-millisecond restoration, but not all require it. In order to remain profitable and retain market share, most service providers must offer voice, private-line, and packet data services on the same infrastructure.

Service providers are experiencing a new dilemma. In order to understand the problem, we must first examine where the bandwidth demand is coming from: the Internet, other data protocols, and voice. Packet traffic has overtaken circuit-switched voice as the dominant source of demand. Data traffic today constitutes some 90% of all traffic. Data unit growth is approximately 100% per year, and IP is the dominant form of data growth. However, other data protocols are also still being used, such as ATM and Frame Relay. The greatest bandwidth demand is coming from the Internet, yet voice represents about 80% of the revenues and dwarfs the data revenue, which is estimated at just 20%. So, while the Internet is the largest source of traffic growth, at the same time, the Internet is today a low-margin service. For example, in the United States, revenues for IP are expected to be only 5% of total Frame Relay and ATM revenues. To address this dilemma, service providers are moving from time and distance orientation to bandwidth and services orientation. They are also recognizing that the ability to deploy and support tomorrow's high-value services requires a new generation of network, an intelligent optical network platform.

The carriers are taking a number of steps to find new high-margin services. The traditional approach has been to offer new services, such as Frame Relay VPNs, IP VPNs, and MPLS offerings. Premium service revenue is driven by value. The offer of higher bandwidth is added value, as is the offer of guaranteed and measurable performance via service-level agreements (SLAs) or the offer of expedited service installation. However, even these advanced services eventually become commodities, and prices begin to drop.

Carriers need to migrate to an intelligent optical network, a new infrastructure composed of intelligent optical switches, reconfigurable optical add/drop multiplexers (ROADMs) that include the functionality of SDH/SONET restoration, DWDM and Coarse Wavelength Division Multiplexing (CWDM) systems, optical cross-connects, and new maintenance and management tools for optical networks. In an intelligent optical network, these devices can communicate with each other to discover the topology, enabling simple A-through-Z provisioning. The strategic direction is to migrate to mesh topology where and when appropriate, choosing expenses that reflect revenue margins. For example, carriers should continue to dedicate a source of restoration for those services that expect it, such as private line or voice, but rely on shared mesh protection or even unprotection for resilient protocol services such as IP, Frame Relay, or ATM.

The new-generation service provider's solution is to offer new, high-bandwidth services, optical VPNs, and public services that act like private networks. Optical networks are the only architecture that can allow IP to scale to meet the demands of the new generation, and this implies the marriage of IP and optical networks, which is discussed later in this chapter.

As mentioned earlier in this chapter, service providers may choose to pursue the strategy of migrating to intelligent optical networks to guarantee growing revenues. Optical technology is revolutionizing networking and introducing a new era of abundant capacity, stimulating developments and growth of bandwidth-hungry applications. These bandwidth-intensive applications, however, are much more cost-effective when the network provides just-in-time bandwidth management options as well. And, of course, these advanced applications demand more than bandwidth; they look for service qualities that allow control of parameters such as delay, jitter, loss ratio, and throughput.

Next-generation SDH/SONET quadruples the bandwidth per channel about every two years. In addition, DWDM improvements are resulting in twice the number of wavelengths per fiber every year. Also, light sources can pulse more bits per second all the time. To top it off, new generations of fiber cable are growing in size, with more than 100 fibers per cable becoming the norm. The result is that optical bandwidth is even outpacing Moore's Law governing growth and processing power.

Internet backbones now account for over 85% of the world's cross-border capacity used in fiber-optic networks. The balance of used capacity is dedicated to private corporate networks and international telephone traffic. The submarine capacity currently deployed worldwide provides on the order of 40Tbps of capacity. Not all of this capacity is being used. Only some 11% to 25% of current fiber capacity is lit. The remainder lies idle, either unpurchased or unused by service providers, although recent trends suggest that bandwidth demand is growing and the unlit fibers will soon be put into action. Nonetheless, the increase in capacity has resulted in dramatic declines in prices. Customer demand for broadband is growing as prices are falling, and carriers are constantly investing in newer technology.