The Optical Core Overlay Versus Peer to Peer Networking Models

Today's advanced networks maintain mostly separate electronic connections for voice and data and achieve reliability by using rings based on the SDH/SONET communication standard. In this configuration, if one link is cut, traffic flows down the other half of the ring. The SDH/SONET multiplexer aggregates the traffic onto the ring, so there's a stack, or hierarchy, of rings, depending on the scope of the network they're serving (refer to Figure 11.1).

In the local realm, which might be a small city or metro area environment, traditionally the rings are based on a capacity of OC-12, or 622Mbps. For slightly larger-scale rings, such as regional rings, OC-48, or 2.5Gbps, is often the capacity. Core backbone rings provide OC-192, or 10Gbps. Currently, as metro capacity requirements are increasing, we're migrating from OC-12 to OC-48. Similarly, some of the regional rings are migrating from OC-48 to OC-192, and we're looking at ways to expand the capacity of the backbone core, generally through the addition of dense wavelength division multiplexers, which allow multiple 10Gbps streams to coexist on one fiber. Although some systems can now offer up to 40Gbps, they are in early stages of deployment.

Rather than using rings, tomorrow's networks will channel all traffic over the same fiber connection and will provide redundancy by using the Internet's mesh approach of interlocking pathways. In that case, when a line breaks, traffic can flow down several alternating pathways. Optical switches will be the foundation for building these integrated networks. Optical switches all have point-to-point links between them (refer to Figure 11.2). If there is a failure in a given link or node, traffic can be quickly rerouted over any other alternative in the network configuration.

There are several problems with the first generation of optical networks. Bandwidth efficiency is an issue at the higher capacities of SDH/SONET. The SDH/SONET hierarchy is not optimized for large data transfers, mainly because it is a single-wavelength solution. SDH/SONET is a TDM scheme, so it does not take advantage of WDM and the resident ability to carry multiple wavelengths (hundreds today and thousands in the future). As a result, operators have to manage two layers todaySDH/SONET and WDMand riding on top of those, both Layer 2 and Layer 3 networks.

To enable a network to request additional capacity to accommodate changes with very large traffic flows, two approaches are emerging: 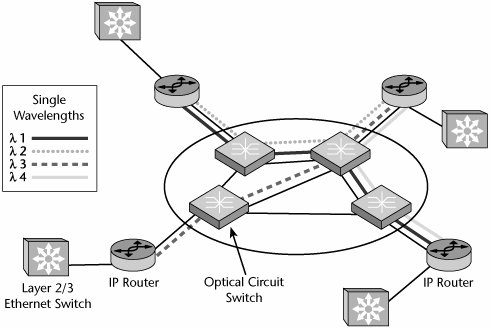 The following sections describe these two approaches to the optical core in more detail.

The overlay model, formally known as the OTN and promoted by the ITU and carrier communities, is characterized by devices residing on the edge of the cloud, the core network infrastructure being hidden from the routed network, and relying on UNI for signaling at the edge.

The ITU's next generation of optical networks is specified under a number of recommendations, including G.872, G.709, and G.959.1. The OTN defines a new network hierarchy, the optical transport hierarchy, whose base unit is the optical transport module (OTM), which has a 64-byte frame. The OTN comprises all optical elements. The initial clients of the OTN are SDH/SONET and data services, including Ethernet, IP, ATM, and Fibre Channel. Management capabilities are defined for conductivity verification, performance assessment, and fault sectionalization.

The OTN has three main elements:

The OTN reaches higher speeds by bundling wavelengths. OTMs, which can span multiple wavelengths of different capacities, are described with two suffixes: n refers to the maximum number of wavelengths supported at the lowest bit rate on the wavelength, and m indicates the bit rate supported on the interface. Together, these are written as OTM n.m. The OTN supports optical signals with three bit rates: When m equals 1, it refers to 2.5Gbps; when it is 2, it refers to 10Gbps; and when it is 3, it refers to 40Gbps. An interface can support combinations of these rates. For example, OTM 3.2 indicates a channel that spans three wavelengths, each operating at least at 10Gbps. OTM 5.12 indicates a channel that spans five wavelengths and can operate at either 2.5Gbps or 10Gbps.

The OTN differs from today's networks in the types of services it can offer. Instant provisioning requires a signaling protocol to set up the paths or connections so that data can be transported. Work on SDH/SONET and OTN signaling is being defined in two ITU ANSI specifications:

Clients connect to the network through one of three types of network interfaces:

The peer-to-peer model, promoted by the data community and the IETF and IEEE standards organizations, relies on the GigE and 10GigE standards. It is characterized by full visibility of the entire network for all devices, the edge devices needing to know only about the closest optical switches, and the routers and optical switches being peers.

Ethernet has a long and rich history and, it would appear, future. The concept of Ethernet is based on the notion that peers in a network send messages to each other over a radio system contained within a common wire or channelwhich is referred to as the ether. Each user, or peer, has an individual and distinct 48-bit key known as the Media Access Control (MAC) address. Today, because of the pervasiveness of Ethernet and the low cost of hardware required to support it, most computers come equipped with the functionality of an Ethernet card.

One of the great benefits associated with Ethernet is the fact that, despite its many different generations, variations, and wiring plans, it is all the same, making it easy to interconnect all types of Ethernet by using highly available and inexpensive hardware. Ethernet, which is mostly standardized under IEEE 802.3, is the most widely used LAN technology, replacing other LAN standards such as IBM's Token Ring or FDDI.

The four major categories of Ethernet standards are 10Mbps Ethernet, Fast Ethernet (100Mbps), Gigabit Ethernet (1Gbps, referred to as GigE), and 10 Gigabit Ethernet (10Gbps, referred to as 10GigE). Currently, there is also work ongoing in the development of 100Gbps Ethernet. However, of the formal standards, 10GigE is quite new, and which of the standards will gain the widest commercial acceptance remains to be seen. GigE and 10GigE are the two standards of interest to access network, MAN, and WAN providers.

As discussed in the following sections, three standards from the IEEE aim to provide the core technology for the new data-centric public network of the peer-to-peer model (see Figure 11.14): 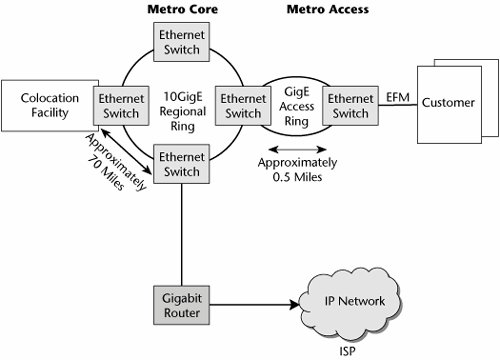 Today, 10GigE, which is in the early stages of deployment, is the highest-bandwidth Ethernet offering. Some of the main 10GigE applications include colocation of carrier facilities, inter-POP connectivity, storage area network (SAN) connectivity, data center disaster recovery and mirroring systems, multimedia transport, computer-aided design, medical file transport, data center access, and local loop access. Therefore, the most likely environments for 10GigE are carriers, university campuses, research and development labs, and some government agencies. But, at the moment, 10GigE is not a common enterprise solution, although it may become so in the near term as companies seek more bandwidth to accommodate advanced applications while wishing to use a technology with which they have well-founded knowledge and experience.

The IEEE is setting two separate physical-layer standards for 10GigE. The first is for LANs; it offers a capacity of exactly 10Gbps and is really just a faster version of GigE. The second is targeted at WANs. Strictly speaking, it is not Ethernet, and it does not run at 10Gbps; instead, it transports Ethernet frames over an SDH or SONET link at 9.29Gbps, which makes is compatible with existing carrier networks but limits the number of GigE links that can be aggregated to nine.

There are two categories of WAN physical interfaces for 10GigE: electrical and optical. Electrical interfaces are less costly to build than optical interfaces, and the reality is that today most commercial buildings do not have fiber access. There are two electrical interfaces. 10Gbps on coax, known as 10GBASE-CX4, has about a 50-foot (15-m) range. It would most likely be used to connect devices within the same room. The other interface is 10Gbps on wire pair, using unshielded twisted-pair. Real solutions are expected sometime in 2006, with the initial definitions including 10GBASE-T over Category 7 wiring (up to 330-foot [100-m] range), screened or enhanced Category 6 wiring (up to 330-foot [100-m] range), or standard Category 6 (less than or equal to 180 feet [55 m]).

In terms of fiber options, a LAN physical interface can operate at the full 10Gbps rate up to a range of 1,000 feet (300 m). This would be suitable for local applications and could be configured to run either point-to-point links or over Resilient Packet Ring. WAN physical interfaces are designed for WANs and pack the Ethernet frames into an SDH/STM 64C payload (OC-192, or 10Gbps), providing a usable capacity of 9.29Gbps. Table 11.1 compares the various physical interfaces for 10GigE.

Three main physical options for EFM are being developed:

The EFM standards also address two modem options: Discrete Multitone (DMT), which is currently used in most DSL modems, and Quadrature Amplitude Modulation (QAM), which is used in HDSL and VDSL modems.

Several major standards initiatives are under way to address the resiliency and QoS issues of Ethernet. The IEEE 802.17 working group is defining the Resilient Packet Ring access protocol for use in LANs, MANs, and WANs, for transfer of data packets at rates scalable to many gigabits per second. Resilient Packet Ring technology enables high-speed, survivable ring networks that are optimized for IP and other packet data. This new standard will use existing physical-layer specifications and will develop new interfaces, where appropriate.

As mentioned earlier, Resilient Packet Ring aims to increase the efficiency of Ethernet and IP services, providing the resilience found in SDH/SONET networks as a function of their network restoration capabilities, and in this way optimizing the transport of data traffic over fiber rings. Resilient Packet Ring also employs the SDH/SONET concept of dual-counter-rotating rings, but in the case of Resilient Packet Ring, they are called ringlets. Ringlets connect Resilient Packet Ring stations at nodes where ingress and egress data traffic is dropped. MAC messages are used to direct the traffic in both directions around the ringlet. Bandwidth negotiation between the nodes is done by using a fairness algorithm. Furthermore, all the traffic on a given ringlet is assigned a class of service, with the standard specifying three classes: Class A (high) traffic exists to support low-latency and low-jitter applications, such as voice and video, requiring a pure committed information rate (CIR); Class B (medium) traffic combines CIR and excess information rate (EIR) metrics, introducing queuing based on fairness; and Class C (low) traffic, used for basic Internet access, covers best-effort traffic, providing whatever bandwidth may be available.

The Overlay and Peer-to-Peer Models Compared

The OTN represents a new generation of physical framework, and it will therefore undoubtedly replace the existing PDH and SDH/SONET infrastructures, supporting WDM, greater bandwidth, and instant provisioning. GigE and 10GigE, offering the benefits of both low cost and familiar protocol solutions, will be favored by those seeking economical and rapid deployments. Both models have the support of strong communities, and we are therefore likely to see evidence of both going forward. We need to be able to control these networks, and that's the realm of the IP+optical control plane, which is the subject of the following section.