In an increasingly competitive market for broadband technology, powerline broadbandoften referred to as powerline telecommunications (PLT), broadband over powerlines (BPL), or powerline communication (PLC)has emerged as a dark-horse technology in a market that is becoming increasingly saturated by DSL and cable modem alternatives. PLT is a wireline technology that uses the current electricity networks for data and voice transmission. It offers a vision that would allow electrical utilities to provide high-speed Internet, voice, data, and video services to customers of all classes via power transmission and distribution lines.

The concept of PLT is not new. It came to be in the 1920s, although the application then was the protection of power transmission lines, as well as telemetry, remote system control, and voice communication. PLT today includes BPL, which infers data rates above 1Mbps, and narrowband over powerlines, which involves much lower data rates. The power company can communicate voice and data by superimposing an analog signal over the standard 50Hz or 60Hz alternating current (AC). Traditionally, electrical utilities have used low-speed powerline carrier circuits for control of substations, voice communication, and protection of high-voltage transmission lines. However, in the broadband race, high-speed data transmission has been developed using the lower-voltage transmission lines used for power distribution. There is also a short-range form of powerline carrier used for intercoms and home automation.

There are three distinct applications for powerline communication:

As shown in Figure 12.9, PLT works by injecting the digital connection into the powerline on the consumer side of a low-voltage substation. The injection point is connected to a fiber backbone by any appropriate means. This could be a wireless connection in a rural area or a DSL or cable modem in an urban area. Utility companies use conditioning units that act as multiplexers to transmit low- and high-frequency signals. The lower-frequency signals carry power, and the higher-frequency signals carry data and voice. The conditioning units are part of a high-frequency conditioned power network (HFCPN) and send signals to outlets in the home or office. These signals are received by boxes similar to cable modems in the home and can link numerous devices, from microwave ovens to PCs. 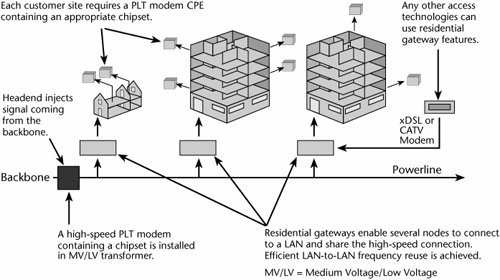 When PLT technology is used to provide broadband Internet access, it is called BPL; simply put, it is the distribution of IP-based services over powerline infrastructure. In this case, a computer or other digital device only needs to plug a BPL modem into any outlet in a facility (home or building) equipped for high-speed Internet access. The most obvious advantage of BPL over DSL or cable modems is the extensive availability of power infrastructure; while not everyone has telephone lines or cable TV installed, most everyone does have power, so PLT enables more people in more locations to gain access to the Internet. On the other hand, the lack of standards for powerline as an access technology means that there is no standard provisioning of the servicethere is no well-established process that can be repeated over and over. And of course, there are differences in the physical characteristics of the electricity network. There are also questions about the total bandwidth BPL can provide as compared to DSL or cable modems.

BPL makes use of the electric circuit between the electric substations and home networks; one standard used for this application is ETSI PLT. PLT modems transmit in medium and high frequencythat is, the 1.6MHz to 30MHz electric carrier. The asymmetric speed in the modem is usually from 256Kbps to 2.7Mbps. The speed in the repeater, located in the meter room, is up to 45Mbps, and up to 256 PLT modems can be connected. In the medium-voltage stations, the speed from the headends to the Internet is up to 135Mbps. Utilities use either optical fiber or wireless links to connect to the Internet.

In the access network, current technology can deliver speeds of up to 45Mbps, while in the home networking applications, up to 200Mbps is possible using the HomgPlug AV standard. (HAN technologies and powerline standards are explored at the end of this chapter.) QoS and CoS capabilities can be implemented by using PLT technologies, which is a critical feature in support of real-time and streaming media applications.

A recent PLT development is the use of microwave frequencies that employ new propagation mechanisms that permit much higher-speed transmission using a single powerline conductor. The experimental work thus far indicates that there is potential for over 1Gbps in each direction, supporting symmetric and full-duplex communication. Trials have also demonstrated that analog TV along with multiple Wi-Fi channels can operate simultaneously in the 2.4GHz and 5.3GHz unlicensed bands over medium-voltage lines.

The Future of PLT

As with any other technology, there are weaknesses associated with PLT. It is estimated that more than 80 PLT initiatives in more than 40 countries have been launched, worldwide, by electric utilities. Pilot sites, technological or commercial trials, and deployments are numerous in Europe. The largest technology dilemma hinges on finding a reliable way to send data on powerlines without causing interference for either data or electrical signals. There are also issues with the number of users PLT can reach and the distance over which it can travel while still providing good-quality data and voice transmission.

Powerline solutions, like phone line solutions, are unintentional radiators. Emissions can potentially cause interference with radio, television, cable TV, telephone, and DSL services. There can also be disruption of the data signals due to noise interference produced by the electronic equipment already on the powerlines, not to mention signal loss over longer distances. In discussing broadband over powerline, there has been for some discussion about the extent to which this technology creates radio frequency interference (RFI). For many, this concern is irrelevant, but for those who work with sensitive instrumentation, it is a legitimate problem. Most of this RFI can be traced to high-voltage powerline solutions, but Motorola has recently produced a low-voltage solution, called Powerline LV, that the company claims eliminates RFI. From a market perspective, WLAN alternatives pose a serious competitive threat to PLT. In addition, PLT's maximum access speed depends on a shared connection, shared by all the users connected to the same local network station, so the more people simultaneously using the Internet, the lower the obtained speed.

PLT technology is still in its early stages, and there was no global technology standard for the use of PLT as a broadband access line in place until early 2006. The Open PLC European Research Alliance (OPERA; www.ist-opera.org), a European initiative to develop BPL technologies and specifications, has been busy working on developing such standards. The OPERA group links European universities and companies developing chips and equipment for broadband and utilities. The group suggests that its standard will be the only really open PLT system that ensures full interoperability for broadband access and in-building distribution systems without recourse to proprietary technologies. After two years of development, a consortium of industry specialists from 35 organizations (including 10 universities), supported by the European Commission, developed a specification based on a marketing and functional requirement blueprint ratified by OPERA. In February 2006, OPERA announced the approval of the first open global specification for PLC access, also known as BPL. This specification will accelerate mass rollout of high-speed, low-cost broadband access, voice, and audiovisual services, as well as utility applications for control and management operations. (The specification, together with an "OPERA Technology White Paper," can be freely downloaded from the Project Outputs section of the OPERA Web site.)

PLT's interference problem is being addressed by developments that use OFDM. As discussed in Chapter 13, OFDM divides available spectrum into small paths that are overlapped and spaced perpendicular to each other. The greater the overlapping, the more paths can be handled. While each path has a low data rate, together they offer a higher rate and more efficient use of the spectrum. By using small data packets inside the homewhere distribution could be interrupted by electrical devices being turned on and offonly a little bit of data might be lost rather than the whole signal.

PLT suffers from distance limitations: It can reach about 2 miles (3 km) with a very low bandwidth or a few hundred yards offering several Mbps. However, unlike with DSL, most premises worldwide are within 300 yards (100 m) of an electricity substation. Vendors are working on extending the reach.

There are significant differences between the electrical distribution systems around the world, and these differences affect the implementation of BPL. For example, in North America, relatively few homes are connected to each distribution transformer, while in Europe, hundreds of homes may be connected to each substation. BPL signals do not propagate through distribution transformers, and additional equipment is therefore required in the North American market. Because of differences in the way the electrical grids are designed, Europe and Asia will most likely see PLT before the United States does. In European systems, electricity is sent to the customer at between 220 and 240 volts, as compared to 110 volts in the United States. The high power throughput means a European substation can serve 100 to 300 homes, while in the United States, a substation can reach only about 8 to 10 homes. Furthermore, U.S. interest in PLT is limited because of the proliferation of existing last-mile technologies such as DSL and cable modems, particularly in urban areas. Many people believe that DSL, cable modems, and fiber alternatives may ultimately outweigh the potential for PLT in Europe as well.

Still, with more than 3 billion users worldwide, the penetration of the electricity networks is almost ubiquitous, bringing access to a global communications infrastructure within reach of the majority of people, without the need for heavy infrastructure costs. However, xDSL and cable modems have already made significant headway, and PONs are enjoying widespread popularity at the moment, while PLT technology is still in the early stages of deployment. As mentioned at the beginning of this chapter, there are many issues to consider when attempting to determine the best solution, as a provider and as a consumer; the choice depends on the prevailing conditions.