Microwave was used during World War II in military applications, and when it was successful in that environment, it was introduced into commercial communications. Microwave was deployed in the PSTN as a replacement for coaxial cable in the late 1940s.

As mentioned earlier, twisted-pair and coax both face limitations because of the frequency spectrum and the manner in which they are deployed. But microwave promises to have a much brighter future than twisted-pair or coax. Many locations cannot be cost-effectively cabled by using wires (e.g., the Sahara, the Amazon, places where buildings are on mountaintops, villages separated by valleys), and this is where microwave can shine. In addition, the microwave spectrum is the workhorse of the wireless world: The vast majority of wireless broadband solutions operate in the microwave spectrum.

Note that the discussion of microwave in this chapter focuses on its traditional application in carrier and enterprise private networks, but there are indeed many more systems and applications to discuss, and those are covered at length in Chapter 13, "Wireless Communications Basics," and Chapter 16, "Emerging Wireless Applications." This chapter focuses on the general characteristics of microwave and its use in traditional carrier backbones and enterprise private networks.

Microwave is defined as falling in the 1GHz to 100GHz frequency band. But systems today do not operate across this full range of frequencies. In fact, current microwave systems largely operate up to the 50GHz range. At the 60GHz level, we encounter the oxygen layer, where the microwave is absorbed by the surrounding oxygen, and the higher frequencies are severely affected by fog. However, we are now producing systems called virtual fiber that operate in the 70GHz to 95GHz range at very short distances. Given the growing demand for wireless access to all forms of media, we can expect to see many developments in coming years that take advantage of the high-bandwidth properties of the higher frequency bands.

The amount of bandwidth that you can realize out of the very large microwave spectrum is often limited by regulations as much as by technology. Before you can deploy a microwave system outside your own private campus, you have to be licensed to operate that system in all environments. In your own private territory, you can use unlicensed bands, but if you want to cross the public domain using licensed spectrum, you must first be granted approval by your spectrum management agency to operate within a given frequency allocation.

Some communities are very concerned about the potential health hazards of microwave and create legislation or council laws that prohibit placement of such systems. In addition, some communities are very sensitive to the unsightliness of towers and argue that the value of real estate will drop if they are constructed. Therefore, several companies specialize in building camouflaged towers. When you see a tall tree, a church steeple, a light post, or a chimney, it could be a wireless tower disguised to protect your aesthetic balance.

Microwave is generally allocated in chunks of 30MHz to 45MHz channels, so it makes available a substantial amount of bandwidth to end users and operators of telecommunications networks.

Microwave is subject to the uncertainties of the physical environment. Metals in the area, precipitation, fog, rainfall, and a number of other factors can cause reflections and therefore degradations and echoes. The higher (in elevation) we move away from land-based systems, the better the performance because there is less intrusion from other land-based systems, such as television, radio, and police and military systems.

Repeater spacing with microwave varies depending on the frequency of transmission. Remember from Chapter 1 that lower frequencies can travel farther than higher frequencies before they attenuate. Higher frequencies lose power more rapidly. In microwave systems that operate in the 2GHz, 4GHz, and 6GHz bands, towers can be separated by 45 miles (72 km). In the higher-frequency allocations, such as 18GHz, 23GHz, and 45GHz, the spacing needs to be much shorter, in the range of 1 to 5 miles (1.6 to 8 km). This is an important issue in network design and, depending on the scope over which you want to deploy these facilities, it can have a significant impact on the investment required.

Another important design criterion is that microwave requires line of sight and is a highly directional beam. Microwave requires a clear, unobstructed view, and it can't move through any obstacles, even things you wouldn't think would be obstacles, such as leaves on a tree. Technologies that depend on line of sight may work brilliantly in areas that have the appropriate terrain and climate, and they may not perform very well where there are many obstacles or where there is a lot of precipitation. Furthermore, line of sight is restricted by the curvature of the earth, which interrupts the line of sight at about 90 miles (144 km). However, new spectrum utilization techniques such as Orthogonal Frequency Division Multiplexing (OFDM) permit non-line-of-sight operation, greatly expanding the use of microwave. (Chapter 15 discusses OFDM in detail.)

The impact of precipitation on microwave can be great. Microwave beams are small, and as you go up into the higher bands, the waveforms get smaller and smaller. Pretty soon, they're smaller than a raindrop, and they can be absorbed by a raindrop and then scattered in a million directions. Therefore, in wet atmospheric conditions, there is a great potential for problems with microwave. As a result, practicing network diversityusing both terrestrial and nonterrestrial alternativesis critical.

One application associated with microwave is to replace the use of leased lines in a private network. Figure 2.3 shows a simple voice environment that initially made use of dedicated leased lines, also known as tie trunks, to link two PBXs in two different buildings across town from one another. Because these tie trunks were billed on a monthly basis and were mileage sensitive, they were going to be a cost factor forever. Therefore, a digital microwave system was purchased to replace the tie trunks. This system provides capacity between the buildings and does away with the monthly cost of the leased lines. This setup is commonly used by multinode or multilocation customers (e.g., a health care facility with clinics and hospitals scattered throughout a state or territory, a university with multiple campuses, a retail location with multiple branches, a bank with multiple branches). 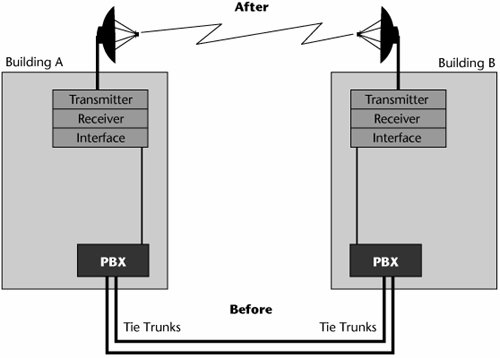 Another key application of microwave is bypassing, which can be interpreted in multiple ways. Initially, this technique was used to bypass the local telecommunications company. With the introduction of competition in the long-distance marketplace, end users in the United States initially had choices about who would be their primary long-distance carrier (i.e., interexchange carrier). But to get to that carrier to transport the long-distance portion of the call, we still needed to get special local access trunks that led through the local operator to the competing interexchange provider. That meant paying an additional monthly fee for these local access trunks. In an attempt to avoid those additional costs, businesses began to bypass the local telephone company by simply putting up a digital microwave systema microwave tower with a shot directly to the interexchange carrier's point of presence.

Bypassing can also be used to circumvent construction. Say that a pharmaceutical company on a large campus has a public thoroughfare, and across the street there's a lovely park where the employees take their lunch and otherwise relax during the day. No one foresaw the fame and fortune the company would achieve with its latest migraine medicine, so it had not planned to build another facility to house the 300 people it now needed to add. Nobody ever provisioned conduit leading to that park across the street. The cost and time to get permission to break ground, lay conduit, pull cable, repave, and relandscape would be cost- and time-prohibitive. To bypass that entire operation, microwave could be used between the main campus and the remote park (see Figure 2.4). This is essentially the same strategy that wireless local loop is pursuing. Rather than take the time and money to build a wireline facility, you can do it much more rapidly and much more cost-effectively on a wireless basis. 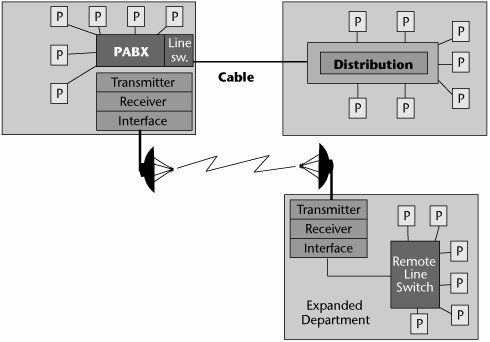 Whereas provisioning twisted-pair or coaxial cable costs roughly US$1,000 to US$1,500 per subscriber and requires a 12- to 18-month deployment time, wireless costs US$300 to US$800 per subscriber and requires 3 to 6 months of deployment time. Something could always delay the process (e.g., contractual problems with the building developer), but, generally, you can deploy a microwave system much more rapidly and at a much lower price point. Therefore, these systems are especially popular in parts of the world where there is not already a local loop infrastructure. In addition, there are several unlicensed bands in the microwave spectrum, which means anyone can use them without needing to apply for and receive a license from the spectrum management agency. This includes the popular 2.4GHz and 5GHz bands used for Wi-Fi, the popular wireless LAN (WLAN) technology used in thousands of "hot spots" around the globe. This makes it even easier for a service provider or an entrepreneur to quickly deploy a wireless network to serve constituents.

Another application for microwave is in the data realm. Say that in your company, the buildings that have telephone systems today are going to have LANs as well, and you want to unite the disparate LANs to create a virtual whole. You can use microwave technology as a bridge between two different LANs, to give the combined network the appearance of being one LAN (see Figure 2.5). 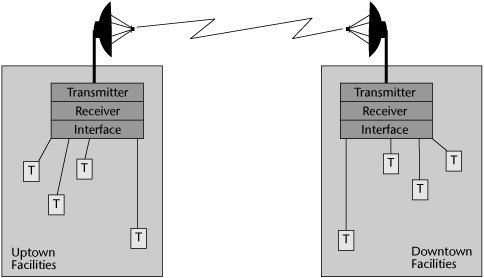 The main factor that inhibits or potentially slows the growth of microwave is that only so many people can be operating on the same frequencies in the same area. Therefore, a big limitation of microwave is potential congestion in key metropolitan areas.

Microwave has a disaster-recovery application as well. Because microwave is relatively inexpensive and quick to deploy, it is a good candidate for use after a disaster damages wireline media, systems, or structures.

Advantages and Disadvantages of Microwave

The advantages of microwave are as follows:

The main disadvantages of microwave are as follows:

As mentioned earlier, the initial application of microwave was focused on the replacement of twisted-pair and coaxial cables used in the PSTN. In fact, MCI first utilized microwave to provide voice and data service, introducing the first major competitive action against AT&T, which until 1984 had a monopoly on local and long-distance telephone service in the United States. The 1984 divestiture ruling formally sanctioned competition in the long-distance arena. Microwave offered great cost efficiencies because no cables had to be laid, allowing a new entrant to easily build a network of long-haul trunks to serve busy routes.

The role of microwave has been greatly expanded since the 1980s, with applications in just about every network domain. It is beyond the scope of this discussion of basic characteristics to go into detail on all the options available today, but detailed coverage is provided in Part IV. The following is a summary of the wireless systems that rely on microwave:

As you can see, microwave is truly the workhorse of the wireless world. Part IV of this book therefore dedicates much attention to its variations.