The IP Multimedia Subsystem (IMS) is the most recent refinement of an enhanced services architecture. It is an architectural framework for introducing a wide variety of IP-based services to the wireless realm, and it is designed to ease convergence via its various specifications. Whereas 3G wireless technology addresses the issue of growing bandwidth requirements, the purpose of IMS is to address the critical signaling and session controls issues associated with multimedia services. Advanced radio technology alone is not sufficient to provide true multimedia services. Other enabling technologies are crucial components of IMS, such as session management protocols, confidentiality and integrity protection schemes, end-to-end quality of service (QoS), traffic management, service control platforms, and billing. IMS, which establishes IP connections between various client devices, was developed with two main goals: to support access convergence with 2G, 3G, 4G, Wi-Fi, and WiMax networks and to support multimedia convergence of voice, video, messaging, and data.

IMS was created by 3GPP, which, as discussed in Chapter 14, develops technical specifications for IMT-2000, the ITU framework for 3G standards. The group represents a global effort, involving six of the world's major standards bodies from China, Europe, Japan, Korea, and the United States. As a note of historical reference, enhanced services have traditionally been deployed as a collection of single solutions, delivered using a vertically integrated approach. The 3GPP architects recognized that this traditional vertical approach was not efficient and, based on this understanding, began to pursue a horizontally layered architecture. The main objectives of this horizontal approach were to support the universal delivery of enhanced services, regardless of the access technology used by the subscriber, while minimizing the costs for the service provider.

The base IMS functionality was first defined in the 3GPP Release 5 (R5) standards, with a focus on 3G mobile telecommunications systems. R5 was optimized for use by GSM UMTS wireless networks. 3GPP Release 6 (R6) standards add a specification for fixed-wireless and wireline networks, as well as interworking with WLANs. 3GPP Release 7 (R7), working together with Telecoms and Internet Converged Services & Protocols for Advanced Networks (TISPAN; www.etsi.org/tispan) R1, adds support for fixed networks. TISPAN is a standardization body of the European Telecommunication Standards Institute (ETSI; www.etsi.org) that specializes in fixed network and Internet convergence. The TISPAN architecture is based on the concept of cooperating subsystems sharing common components.

IMS is such an important development that even wireline carriers are looking toward IMS as the basis for achieving a single enhanced services architecture for delivering any service, using any media, to reach any customer, regardless of how the person connects to the network. (Chapter 10, "Next-Generation Networks," discusses the details of IMS. This section focuses on the relevance of IMS to wireless networks.)

IMS is key to IP for 3G networks because its purpose is to create a telephony-oriented signaling network that overlays an underlying IP network. IMS is designed to support IP-based multimedia services, and as you know, multimedia is the main application driving the requirement for broadband infrastructures in both the wired and wireless realms. The 3GPP IMS and the 3GPP2 (www.3gpp2.org) version, Multimedia Domain (MMD), provide the technological basis for the provision of mobile multimedia services in next-generation networks.

IMS is a service infrastructure that relies on Session Initiation Protocol (SIP) to establish and maintain call control. IMS is an internationally recognized standard that defines a generic architecture that will offer VoIP and other multimedia services in wireline and wireless applications. Because voice is still the primary application for wireless telephony today, by adopting SIP as the signaling protocol, wireless service providers have a standard that works well for both voice and data. In fact, VoIP has now become the foundation of almost every service provider's next-generation network architecture, including wireless, wireline, and cable/MSP operators. As we examine the role of VoIP in these providers' networks, it is clear that it constitutes a vital part of their strategies for differentiation, reduced costs, and increased competitiveness.

The IMS architecture is divided into three layers: transport (or access), control, and service (or application) (refer to Figure 10.2 in Chapter 10). IMS assumes that each user is associated with a home network, and it supports the concept of roaming across other wired or wireless networks. IMS also includes a policy engine and an authentication, authorization, and accounting (AAA) server for operator control and security. Rather than the vertically integrated service stacks of today, as Figure 16.2 shows, IMS calls for a single support structure for all services: one billing system, one set of operational support system (OSS) elements, and one subscriber database, accessed by applications that are created and delivered on-the-fly to any number of endpoints, as defined by the user. It is a vision of seamless, contextual personal communications that means not only new revenue-generating services for carriers but also a radical reduction in operational complexity.

Figure 16.2. Moving up the value chain: the wireless IMS architecture 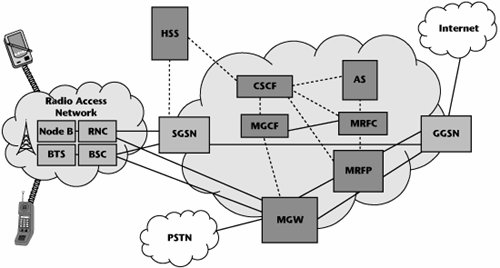 The IMS architecture is composed of many components, operating at various layers, as illustrated for next-generation wireline networks in Figure 10.3 in Chapter 10. While Figure 10.3 covers the full set of IMS components, Figure 16.2 is a simplified illustration that incorporates components specific to wireless networks, showing the connectivity between radio access networks (RANs) and the IMS layers.

As shown in Figure 16.2, the wireless IMS architecture includes the following key components:

Two of the first applications making use of IMS are expected to be push-to-talk and presence-based services, which are discussed in the following sections.

Thanks to its revenue potential, push-to-talk is one of the most talked-about mobile applications. Push-to-talk, which turns a mobile phone into a walkie-talkie by giving it trunked radio functionality, ended up being one of Nextel's (www.nextel.com) key market differentiators, causing the cellular industry to see it as the next killer application for mobile networks after voice and Short Messaging Service (SMS). Push-to-talk gives end users the ability to quickly find one another and engage in brief, burst-oriented communication. Rather than being a replacement of long, interactive communication, push-to-talk is best suited for quick communication among end users. Due to the fact that it is provided in half-duplex mode (i.e., transmission occurs in both directions, but not at the same timeeach party must wait to speak), the users are unable to interrupt each other.

Because push-to-talk is by definition a group activity, and not everyone in a group may subscribe to the same mobile network or own the same handset model, push-to-talk absolutely depends on standardization and interoperability. Push-to-Talk over Cellular (PoC) is the official standard that defines how push-to-talk can be deployed over a cellular operator's packet data network using VoIP. The key to PoC is IMS. Although the IMS standard has been completed by the 3GPP in its Release 5 specification, it has yet to pass the trial stage even in existing 3G networks. The PoC standard was submitted to the 3GPP in September 2003, and in June 2005 the Open Mobile Alliance (OMA; www.openmobilealliance.org) announced the availability of the OMA Push-to-Talk over Cellular 1.0 Candidate Enabler (OMA PoC 1.0). After announcing its PoC 1.0 specifications, OMA held the first interoperability TestFest for OMA PoC 1.0, where six servers and eight clients deploying OMA PoC 1.0 were tested. Any PoC offerings prior to OMA PoC 1.0 are prestandard.

QoS is a top priority, particularly as voice, or "talk," is only the first application in the family of push-to-x services. Push-to-talk is destined to be combined with other applications, including presence, picture sharing, and video clips (push-to-view, or streaming video during a PoC session). Although PoC is anticipated to have a strong future, it will not be here for some time.

Presence-based services are beginning to evolve in the mobile space, although mobile carriers have been slow to offer presence-based services, largely due to constraints associated with usability and user awareness. The most basic impact of presence services is to allow mobile users to view the availability and communication means of other users. Presence can be a key enabler to stimulate use of services such as voice, Multimedia Messaging Service (MMS), SMS, instant messaging (IM), push-to-talk, and multiple-player gaming. One of the key advantages of deploying IM is to build on the success of SMS by offering new, more sophisticated messaging services.

Presence is expected to get a boost from PoC, as well as from an increasing penetration of mobile phones equipped with Instant Messaging and Presence Service (IMPS). IMPS has four features:

The IMPS standard was originally proposed by Nokia (www.nokia.com), Ericsson (www.ericsson.com), and Motorola (www.motorola.com). The IMPS specification, which is managed by the industry consortium OMA, defines how the system should interface with existing wireless network infrastructures. IMPS also provides an open interface to existing IM communities such as AOL (www.aol.com), Yahoo (www.yahoo.com), and MSN (www.msn.com). In order to engage in IM on a mobile with IMPS, the user needs a phone with an IM client as well as IMPS to connect to. The OMA IMPS Enabler release is designed for exchanging instant messages and presence information not only between mobile devices but also between mobile and fixed devices. IMPS 1.2 was approved and released in January 2005. IMPS 1.3 Enabler, a candidate for the next upgrade, is a significant enhancement of IMPS 1.2 Enabler, although it is not designed to be backward compatible with previous IMPS versions.

There are many obstacles to bringing mobile presence and IM services to market, from technical and business issues to user awareness. The biggest challenge is the lack of interoperability between services and between handsets. Other major issues include concerns about privacy and ease of use. Finally, business issues also present problems, including usage cases, appropriate applications and content, negotiation of deals with IM providers, cannibalization of voice and SMS services revenues, and the cost of installing a presence server. Analysts suggest that the main application for mobile presence services will be in the peer-to-peer consumer segments rather than the enterprise market. Until there is widespread adoption of mobile IM/presence by users, it is unlikely that it will be used with any significance as a medium for business-to-consumer communication.