An FXO is a port type that connects subscribers to central office (CO) equipment or PBXs. You can use FXS to connect to regular analog phones or PBXs.

In general, an FXS port is a port that comes from the service offering equipment, whether it is a CO class five switch, a PBX, or a voice gateway. An FXO port is a port from an end device, such as a telephone, fax, or modem, that is connected to an FXS port to obtain telephony services.

FXS ports are the ports that you plug a telephone, fax, or modem into that provide telephony service. For example, an analog telephone that is connecting over twisted copper pairs to the port in a home or a port on a PBX is connecting to the FXS port of the telephone carrier or the private telephone exchange. FXS ports provide dial tone, battery current, and ring voltage to the subscriber device.

Dial tone is the current that the FXS port places on the analog circuit to inform the subscriber device that the line is ready to collect dual tone multifrequency (DTMF) tones for call routing.

Idle voltages range from 24V to 48V and are configurable. Ring voltage is the voltage that is placed on the analog circuit to inform subscriber devices of an incoming call.

FXO ports are the ports on subscriber devices that connect to the CO or PBX to receive subscriber services. Examples are the port on a telephone, modem, or fax that connects to the FXS port in the wall, PBX, or voice gateway. PBX systems and voice gateways can also contain FXO ports that are connected to the CO. For example, you can connect an analog telephone FXO port to the FXS port from a PBX for voice service. This FXS port allows the analog phone to call other phones that are connected to the PBX. The PBX might also contain an FXO port that is connected to a CO FXS port. This FXO port allows the PBX to route calls from its FXS ports to the public switched telephone network (PSTN). On-hook/ off-hook indication is delivered to the FXS port by a change in voltage on the analog line.

If the power to the router fails, a metallic path is established between certain FXO and FXS ports. You can mark the analog phones that are connected to these FXS ports as emergency phones for calling out to the PSTN even when the router is down.

A subscriber device that is connected to an FXS port initiates communications by delivering off-hook indication. An FXS port detects the off-hook state and prepares to gather DTMF tones used to determine how to route the call. The remote FXS port applies ring voltage to the remote subscriber FXO, and the remote FXO detects ring voltage and goes off-hook, indicating reception of the call and closing of the call circuit. The call is ended by each local segment entering the on-hook state and the FXS port sending on-hook indication. You can accomplish supervisory signaling between FXS and FXO ports in two ways: loop-start and ground-start signaling.

Loop-start signaling involves the breaking and connecting of the 48V circuit loop originating from the CO equipment. During the on-hook state, the subscriber equipment has a break on the loop, so no voltage is passing. When the subscriber equipment goes offhook, it closes the loop, and current flows. At this point, the CO detects the closing of the loop and provides a dial tone. To seize the far-end subscriber, the CO provides an analog current across the line called ring voltage. This current causes the subscriber device to "ring," indicating an incoming call. When the subscriber answers the call, or goes off-hook, the 48V circuit loop is closed and the CO turns off the ringing voltage. The call is now connected.

The loop-start method has the advantage of not requiring a common ground between the CO and subscriber equipment. However, it does not provide far-end disconnect monitoring. There is no mechanism in place to determine when the remote party has returned to the onhook state. There is also poor glare resolution with loop-start signaling. Glare occurs when both the CO and subscriber equipment attempt to seize the line at the same time.

The FXO port sends address signaling to the FXS port to indicate the final destination of the call. Analog address signaling can use either pulsed digits or DTMF tones. DTMF is a common implementation of MF tones that defines eight reference frequencies and tone-pair to digit mapping.

Pulsed tones are rarely used today. Pulse tones were originally sent by spinning a dial wheel on a telephone. As this mechanical device spun, it opened and closed the circuit. The pulses, or duration of open and closed, vary by country but must be consistent within a specified tolerance.

Today, most analog circuits use DTMF tones to indicate the destination address. As you push the buttons on a touch-tone phone, two different frequencies are sent on the circuit. This combination of frequencies notifies the receiving side of the digits. Table 5-1 lists the frequencies that are associated with each button on a telephone keypad.

Because address signaling is transmitted only from the FXO port to the FXS port, calls from the PSTN on a typical analog circuit do not indicate the end destination of a call. For a typical residential application, this is not an issue, because all phones on the associated line will ring. When the analog service is connected to a gateway or PBX, it would be beneficial to receive addressing signaling to allow calls to be routed to individual phones on the system. Some service providers offer this service by providing an FXO port as the demarcation. You can then connect an FXS port that is configured for direct inward dial (DID) service and receive address signaling from the PSTN. You cannot configure all FXS ports to support DID service.

You cannot use FXS ports that are configured for DID service to place outbound calls.

The FXS port provides informational signaling using call progress tones. Call progress (CP) tones are audible tones that the FXS device sends to indicate the status of calls. Functions are determined by the frequency of tone sent and the cadence of the tone. For example, in the United States, a dial tone is a continuous generation of 350 Hz and 440 Hz, whereas a busy signal is 480 Hz and 620 Hz with a .5 second on/.5 second off cadence. A sample list of call progress tones is as follows:

Caller ID is a service provider feature that allows the receiving party to be notified of the directory number of the calling party. Caller ID is based on Telcordia Publications TR-TSY-000030 and TR-TSY-000031 and is officially known as Calling Number Delivery (CND).

CND sends the calling party information between the first and second ring of a call. The information is sent as ASCII-encoded text in a 1200 bps stream of data bytes and includes the date, time, and calling party number and name.

FXO ports support inbound Caller ID. You can also configure a name and number for FXS ports by using the station-id command. This information is used for calls within a system only. Calls to the PSTN present the official directory information stored in the service provider database.

Traditionally, there was no need for the FXS port to inform the FXO port of disconnect because the end user was a person. During a phone conversation, people indicate the end of the discussion or assume the end of a discussion by a prolonged silence. Even if the end user is a modem or fax, disconnect indication is not required because this type of device can detect when it loses the carrier from the far end. However, complications arise when the FXO port is part of another switching system, such as a PBX or voice gateway. During loop-start signaling, the status, or battery state, of the FXS device never changes. If the FXO port is on another switching device, the remote end might become disconnected, but the PBX or Voice over IP (VoIP) gateway has no indication of the disconnect. In this case, the FXO port can be left in a hung state.

If the default disconnect tone for a country does not work, you can specifically define the tone. You can modify settings for frequencies, power, delay, and cadence. You must obtain from the service provider the information that is required to configure the tone, or you must determine it using a frequency analyzer. Example 5-3 shows how to customize the disconnect tone.

Centralized Automated Message Accounting (CAMA) is an old telephony protocol that was developed for long-distance billing but is widely used today in the United States for enhanced 911 (E911) services. The protocol allows for both the calling and called number to be carried using in-band signaling. This is needed in 911 calling because 911 calls are routed to the appropriate service center based on the calling number. CAMA allows the telephone company to transmit the calling number to the public safety answering point (PSAP) dispatcher prior to establishing the audio connection. This is crucial information because it tells the dispatcher the exact location that the call is coming from and provides callback information if the call is disconnected.

Most E911 networks are standalone entities within their own region. Many states have laws requiring that businesses connect directly to the local E911 network, and this legislation is expected to be passed throughout the United States in the near term. More than 80 percent of the E911 networks in the United States consist of CAMA trunks, whereas some E911 regions allow alternative connections, such as ISDN. A CAMA trunk can either be an analog telephone line carrying MF signaling or a voice T1 with MF signaling. The enterprise device, whether it is a voice gateway or PBX, connects directly to the E911 device. This device routes the call to the appropriate PSAP based on the calling number of the incoming call.

You can configure VIC2 FXO ports to support CAMA signaling.

E&M signaling was developed to interconnect PBXs using dedicated circuits from the PSTN. Unlike the 2-wire FXS/FXO circuits, E&M circuits are 8-wire. The voice path uses either 2-wire or 4-wire. The remaining four wires are used for signaling. Table 5-2 lists the wires, or leads, that are used in E&M circuits. 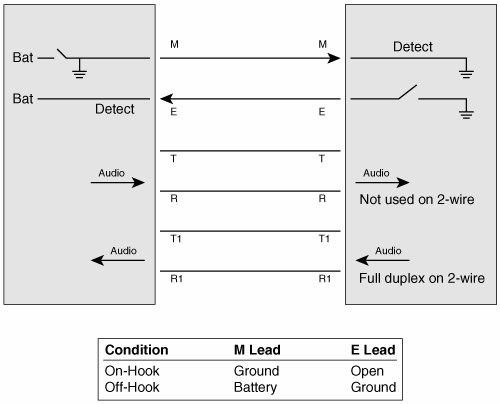 Type II signaling interfaces cause little interference and are typically used for sensitive environments. These interfaces use four leads for signaling: E, M, SB, and SG. During onhook, both the E and M lead are open. The trunk side indicates off-hook by connecting the M lead to the SB lead connected to the battery of the signaling side. The signaling side indicates off-hook by connecting the E lead to the SG lead that is connected to the trunk circuit ground. 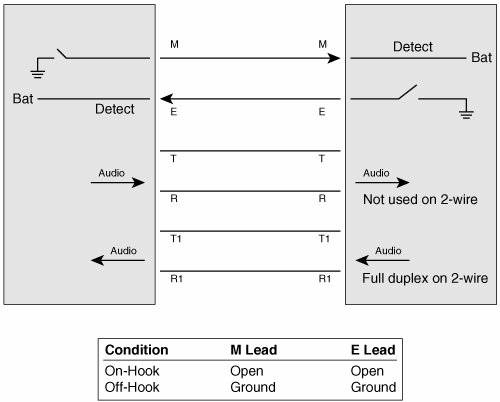 E&M supports three mechanisms of start dial signaling used between off-hook and digit collection: wink-start, delay-start, and immediate-start. Like FXS/FXO, both pulse dialing and DTMF can be used for address transmission.

Immediate-start is the most basic of the trunk-signaling methods. The originating switch goes off-hook, waits for at least 150 ms, and then forwards digits.