Basic SIP session setup involves a SIP UA client sending a request to the SIP URL of the called endpoint (UAS), inviting it to a session. If the UAC knows the IP address of the UAS, it can send the request. Otherwise, the UAC sends the request to a proxy or redirect server to locate the user. That server might forward the request to other servers until the user is located. After the SIP address is resolved to an IP address, the request is sent to the UAS. If the user takes the call, capabilities are negotiated and the call commences. If the user does not take the call, it can be forwarded to voice mail or another number. The following sections outline various scenarios in more detail.

Cisco routers, including CME routers, can act as SIP gateways for calls that originate from non-SIP phones. The gateways function as SIP UAs and set up a SIP session between them for each call. Figure 4-1 shows two routers handling analog phones, using SIP between them. In this example, SIP GW-A originates the calls and acts as a UAC, and SIP GW-B acts as a UAS. The signaling from the PBX to the gateway is just normal analog call signaling. Only the two gateways exchange SIP messages. 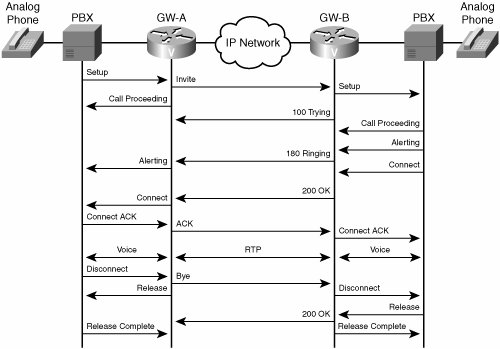 After the first phone initiates the call, the call flow proceeds as follows: 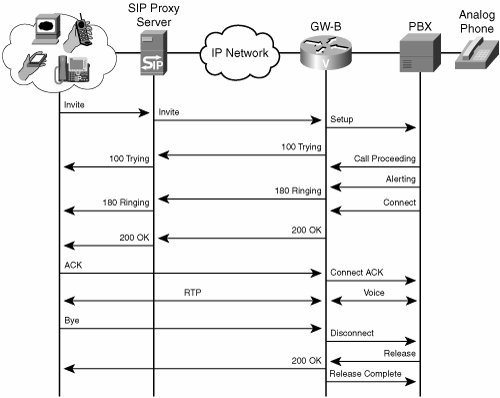 In Figure 4-2, a SIP endpoint places a call using a proxy server. The figure shows several types of endpoints:

In Figure 4-2, one of these endpoints places a call to an analog phone behind SIP gateway GW-B. The call flow proceeds as follows:

SIP UAs and SIP proxy servers can contact a redirect server to determine where to send an INVITE. They typically do this when the called number is outside the local domain. The redirect server returns the most detailed information it haseither endpoint location(s) or the location of the next-hop server. Then it relies on the proxy server or UAC to route its INVITE appropriately.

Figure 4-3 shows the call flow in a more complex network with registrar, redirect, and proxy servers. (Recall that these are functional units and can all reside in the same device.) The figure shows the messages that are necessary to route the initial INVITE method to the UAS. After GW-B, the UAS, receives the INVITE, call flow is similar to the previous examples.

In Figure 4-3, one of the SIP endpoints in Network A calls an analog phone behind gateway GW-B in Network B. The following steps take place:

Following these steps, GW-B sets up the call with the PBX. It sends responses to Proxy-B, which forwards them through Proxy-A to the calling endpoint. If Record-route is enabled, all further signaling goes through the proxies. If not, call signaling proceeds as shown in Figure 4-2.

CallManager 5.x supports SIP phones and is an integral part of a SIP network. It can play different roles, such as registrar server and B2BUA.

Figure 4-4 illustrates a call flow scenario with CallManager acting as a B2BUA. 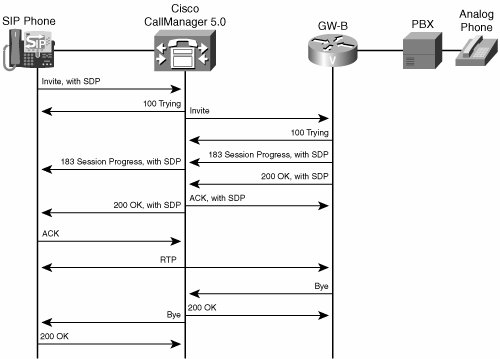 In Figure 4-4, a SIP phone is registered to a CallManager. The SIP phone places a call to an analog phone off a PBX behind the router/gateway GW-B. A SIP trunk exists between CallManager and the gateway. CallManager acts as a B2BUAit terminates each leg of the call during the signaling phases, yet it allows the RTP stream to go directly between the two endpoints. This is accomplished by the way SDP information is sent.

Qshell for iSeries
Beginning Cryptography with Java
Strategies for Information Technology Governance
Cisco Voice Gateways and Gatekeepers
Persuasive Technology: Using Computers to Change What We Think and Do (Interactive Technologies)
The Oracle Hackers Handbook: Hacking and Defending Oracle
Flylib.com © 2008-2020.
If you may any questions please contact us: flylib@qtcs.net
Privacy policy
This website uses cookies. Click here to find out more.
Accept cookies