Calling privileges describe the types of calls that a phone, or a class of phones, is able to place. For example, you might not want your lobby phones to be able to place long-distance calls, or you might want to restrict some employees from placing international calls. The call processing system typically controls these types of restrictions. When the router is the call processing system, running either SRST or CallManager Express, you implement calling privileges using COR.

COR is required only when you want to restrict some phones from making certain types of calls while allowing other phones to place those calls. If you do not want to allow any phones to call 1-900 "premium" calls in the United States, you can build your dial peers to prevent these calls. This is much simpler than implementing COR to restrict all phones from placing 1-900 calls. 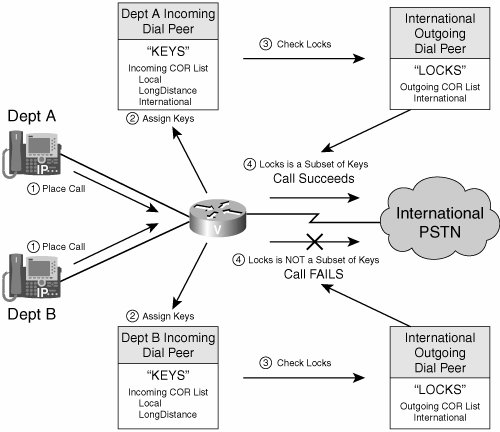